On election night, when the results were showing Trump had the chance to do what the media said was virtually impossible, win the election, S&P500 tumbled so far, they were halted.   Futures traders were taking that 'big, fat, ugly' stock market bubble talk to heart.

However when the sun arose the next day  there was a change of heart.

Investors went on a buying bonanza, with S&P500 futures sporting its biggest reversal since the financial crisis in 2008.  The VIX, widely referred to as the Fear Index, posted one of its worst declines in history.

And the rally hasn't stopped.  Small caps are up a mind boggling 11 sessions in a row.

What else is rallying?

The US Dollar is stronger than its been in some 14 years.

The bull flag has broken to the upside for the US Dollar.  The Euro is headed toward the previously 'much gyped' parity with the US Dollar, although no one seems to be really talking about that anymore.  The US Dollar strangth should continue well into 2017 and possibly beyond. 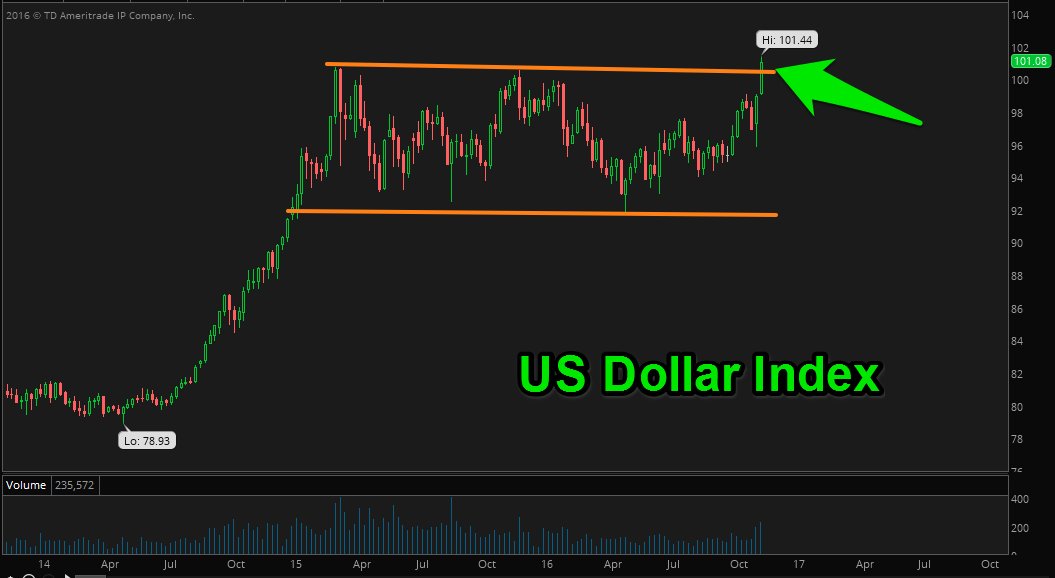 There are many factors behind the rise in the US Dollar.  The more obvious ones are what has been going on the last few years.  The FED has handed off the easy money baton to other Central Banks, with the ECB and the BOJ still hell bent on doing everything they can to restore growth to their economies, even if it means buying corporate junk bonds and shares of publicly traded corporations.

The looming December rate hike by the FED has also put a floor under the US Dollar.  Odds of a rate hike are over 95%.   Of course after the 2016 Presidential election we know nothing is certain.... or perhaps we just  learned not to listen to the media... either way there is a chance they don't hike rates, but I think its already a foregone conclusion.

What matters now... will they hike again?.... and how soon will that be?

Since the election not everything has been going up.  Of course we know the VIX has fallen sharply.

How about those bonds?

Higher Interest rates you say?  The consensus now is that Trump will bring inflation back through his policies.  Yellen didn't seem so excited about it last week.  Isn't that a little ironic?  Don't you think?

Here the FED has been trying to reinflate the economy since the financial crisis, and all they've been able to do is inflate the stock market to record highs and the bond market to record low yields.  Trump comes in with policy's that may bring wage and economic growth back and the FED isn't so excited about it.

Because higher inflation means  after 7+ years the baby needs to move from a bottle to solid foods.  The binky gets taken away.  No more training wheels.  What's worse, and we have seen it with the drop in bonds and the spike higher in the dollar, what happens if inflation expectations being to spike higher?

Trump may force the FEDs hand via higher than expected inflation, which means higher interest rates are coming.

Higher interest means all those companies that have been feeding on the FEDs teet will have to fend for themselves for food.  In this case food meaning money, debt, loans, financing.

The FED funds rate has been dropping as well.  The FED FUNDs rate  looks like the chart of a publicly traded company on the verge of bankruptcy.

We are at a key point  in time for interest rates, bonds, the US Dollar and the stock market.

What do I think we can expect in the months and years ahead?

The US Dollar is on the Cusp of a multi-year breakout to the upside.  The Euro will drop versus the US Dollar to 1.00,  and ultimately find its resting place in the .80's.  With the Euro being a key component on the US Dollar index, you can expect the US Dollar to rally another 5-7% from current levels over the next year.  The Yen will also weaken substantially against the US Dollar.  Much to the delight of Japanese Prime Minister  Shinzo Abe the  current 110 exchange rate  of the USD/JPY will likely turn into 130 in the next 6 months, which will also aid in strengthening the US Dollar index.

What has become a Central Bankers best friend... deflation... has now morphed into an inflationary nightmare.  I know deflation is  supposedly what keeps Central Bankers up at night, but in reality deflation makes their jobs much easier.  They don't call it 'easy money policy' for nothing.  When inflation rears its ugly head the Central Bank is forced to take the bottle away from the spoiled rotten 7 year old.  Inflation is good when it remains modest.  But if prices start to rise too quickly, which is a possibility, the FED could be forced to raise rates more quickly than they, or anyone else ever expected.  And this remains  a US dollar positive. 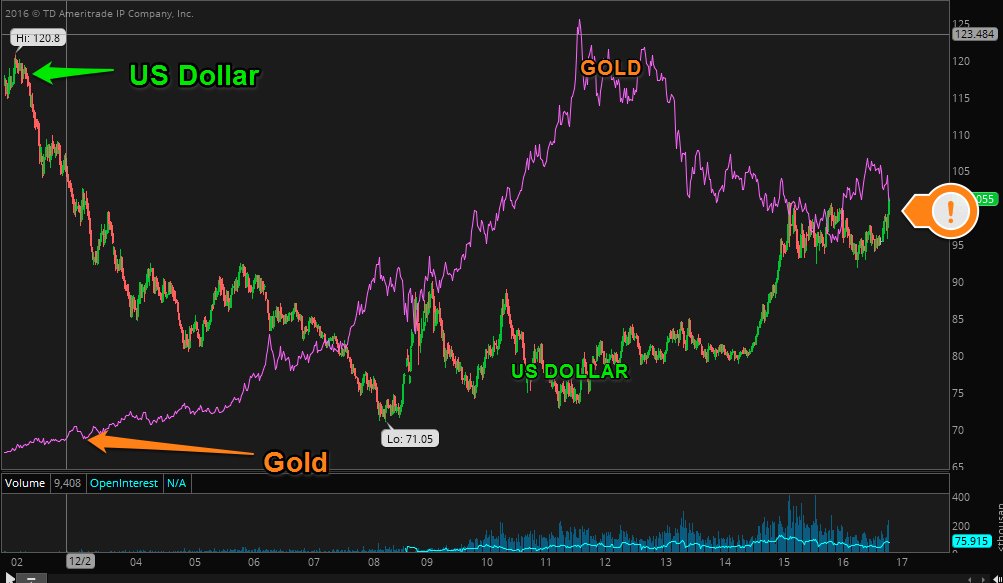 Inflation is likely to pop over that key 2% level, interest rates are moving higher.  And those who were buying bonds with historically low yields have already started to panic amid the post-election collapse of bond prices.  But.... we have the ECB's to thank for keeping a lid on the sell-off.  Why?  Their policies over the last few years have manipulated the market into thinking countries that were on the verge of default are now the soundest lenders in the world.   It is truly amazing what  just a few trillions of fake money will do.

Interest rates on the most 'secure' bonds in the world, US treasury bonds  are yielding significantly more than say a Spanish bond.  Let's not forget the heavily indebted PIGS in Europe, Spain, Portugal, Greece, and Italy, were all on thre verge of default just a few years ago.  Bond yields  were going through the roof.  The ECB stepped in to manipulate prices lower and now Spain's bonds are trading as if they are the stronger nation financially than the United states.

We could argue about the moral hazard the Central Banks have created, but lets look at the facts as they stand right now.  Bonds in the United States offer yield that you can't find in Europe.  Hence the money flow from Europe into the US Treasuries will keep the bond sell-off under control.  However I still think they have a lot further to fall.

One chart that really has my attention is earnings.  Fueling the rally since the March 2009 lows has been the ability for corporations to finance their operations via cheap debt.  They have also used this cheap debt to buyback their own stock.  Buying back their own stock has made their price per earnings ratios go up.  But what we have been seeing recently is overall earnings fall.  This is something we saw prior to the internet bubble popping in 2000 and the financial crisis in 2007/2008.  This us a concern going forward.

Cheap money will not be the markets savior.  On the contrary money will become more expensive.  Those cheap debt sales to buy back company stock will become a thing of the past.  What's worse is those corporations who have piled on the debt to finance share purchases will now be facing higher rates at which to service that debt.  On the flip side Trumps lower corporate tax rate could help alleviate some of those issues.  However the stronger US Dollar will be a negative for the large cap multi-nationals as well as those high growth stocks that have banked on future growth coming form overseas ( I have quite a few of those I'm going to cover in a later article)

Look at the action since the Trump election.  He hasn't done anything yet, but the market is already starting to price in what it thinks will happen down the road.  Or has it?  Perhaps the market was going to rally after the election regardless of who was elected.  You could argue this rally is more of a relief rally than anything else.  Pent up buying pressure for those waiting for the election to conclude before making a move.

Which is why Yellen isn't so excited about the spectre of rising inflation.

We saw it the last two weeks with the Shipping stocks soaring exponentially.  Speculation is strong and I think it will continue into names like $X, $CLF, $MOS, $POT, $WLL, $RIG to name a few.

Corporations who have been using their publicly traded stock as a piggy bank, and who have used low interest rates to expand their balance sheet instead of de-leveraging it,  will get what they have coming to them in the months ahead.

High p/e stocks, and we saw this just after the election, will take a hit.  Growth stocks have done tremendous since the financials crisis.  And despite this past weeks 'relief' rally in many of them, I think they are setting up for some significant downside in the months ahead.

One thing is certain, the winds are changing.  And there is going to be tremendous trading opportunities as this market moves out of a nearly two year trading range.

I'll have more stock specific names in my next article.

If you haven't checked out our community, there's no better time than now.