LTRO?  What is the LTRO?  For some reason everytime I see a headline about LTRO, hear it on Bloomberg, or see it on CNBS, I think of LMFAO.  Perhaps thats what I feel like doing when I think about the whole program.  Or maybe its because I associate LMFAO now with that bonehead group that had 20 seconds of fame during the Superbowl halftime.  I'm sure Merkel has "I'm Sexy and I know It"  in her playlist.

Once again.  What is LTRO?  It's  just another 4 letter acronym like TARP which basically means handing those who are about to go bankrupt free cash.  In LTRO's case its 3 years of free cash.  An inexpensive loan to those who need it.  The next LTRO is coming this week (results to be announced Wednesday at 11am)  and the market is expecting  loans up to $1 trillion. The estimated range is anywhere from $200 billion to $1 trillion.  Sounds pretty accurate.  That's like a weatherman saying the temperature tomorrow is going to be anywhere between 20 and 100 degrees.  LMFAO!    Let's not blame anyone as this is only the second LTRO and no one has any idea just how hungry those banks will be for the free handouts.  Much like QE it will probably never end.  From a banks perspective why not take the free money, especially if your competitors are. It keeps everyone on the same, government assisted playing field.

I'm not the only one LMFAO about LTRO.  This is from Marketwatch.com this morning "the European Central Bank’s December decision to flood the euro area’s financial system with long-term liquidity via inexpensive three-year loans has been credited with everything short of curing the common cold. "   Everything short of curing the common cold?  Last I checked Merkel is about a 12 pack away from being anything short of pleasant to look at,  there is plenty more to be cured. LMFAO!! 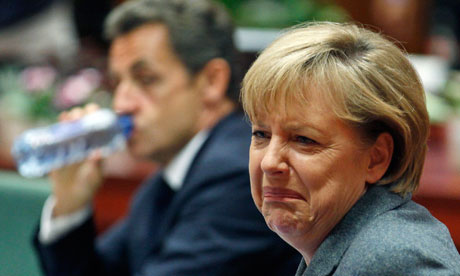 LTRO  follows the same theme we've seen since 2008.  Patch up the huge cracks in the sinking ship with massive amounts of paper.  Paper doesn't hold up so well in water, and those cracks have never been repaired the right way.  Right now everything looks rosy, but years from now no one will be laughing when they look back at LTRO.