Let me start by saying I own $HLF puts, currently the $41 strike that expire this week. I plan on adding April puts on any bounce this week. The trade is already profitable and will increase in value if $HLF continues to fall, as I think it will.

I believe Carl Icahn's purchases in $HLF stock, he now owns over 16 million shares, are backed more by emotion than anything else. I've learned over the years that buying something when your emotions are at play usually turns out to be a bad move. The wildcard is his deep pockets, experience, and the legacy of Carl Icahn. The odds are clearly stacked against the bears but I think the trade for now is for downside. 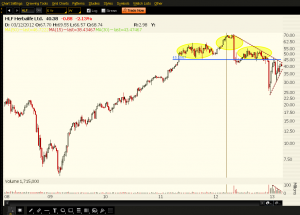 The chart for $HLF remains decidedly bearish. Short term we have an ascending wedge that should send the stock back to at least $35 and possibly lower. Longer term we have a trend line from $70, the stocks all time high, that remains well in place. Each spike over the last two months has hit this trendline almost perfectly and then faded. A firm break of this trendline will send me running for the hills, but for now my strategy is to remain in my current put position, add to it via April puts, likely $37/$38 strike, over the next few days or weeks.

When Carl Icahn announced his position in $HLF several weeks ago, the stock was trading at $38 and spiked the next day pre-market to almost $49. Everyone was calling right there for this massive short squeeze. It was going to be historic. The stock was going to $100 in a few days. It was going to be the trade of the century. That massive squeeze never materialized. After being up pre-market the stock opened sharply higher but fell the rest of the day as hedge fund managers like Daniel Leob were selling out of $HLF for a nice profit. The stock continues to melt lower, and on some days, like today, we get a rumor or a small news piece that creates a spike that is quickly faded.

Should $HLF trade for a higher price per share? We have a legendary investor taking a massive position in a stock that has a giant short position. We have a company that has done nothing but grow, a company that is in the early stages of a $1 billion share buy back program. We have numerous analysts and hedge fund managers saying the stock is under valued, it should be at much higher levels. The stock seemingly has no where to go but up.  Yet $HLF still can not break out of its downtrend.   Until that downtrend breaks, I will be a buyer of puts. I think the current turn lower will find support at $35. If that price doesn't hold this stock could hit new multi-year lows before the summer is here.