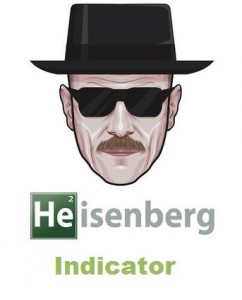 At any rate, CNBC analysts have been saying to sell every step of the way. The infamous Hindenburg Omen, the oft mentioned and always wrong technical analysis pattern, received a great deal of press this past summer. In fact, the Omen received more media attention than the birth of that Kardashian Compass Kid, East West South. Hindenburg was supposedly alerting YOU to an impending market CRASH! And yes; we've written in the past here at optionmillionaires.com about the possibility of a crash:  https://www.optionmillionaires.com/2013/stock-market-ready-crash/

Here's what we've been saying for years: EVERY DIP since the market lows in 2009 has been a fabulous buying opportunity. Our videos, our blog posts, in the chat room...everywhere. The Heisenberg Indicator (HI) is saying that as well.  Meanwhile the bears, the bearish sites, the bearish blogs -- who somehow have a nickel left to short this market and continue to be wrong some 4+ years later -- still say "sell." But even a broken clock is right twice a day (yes, I use this line often).

Let's get one thing straight: this is a centrally planned market. We are piling on billions upon billions of dollars worth of debt. And I agree with the bears: none of this will end well. Rest assured, when it's time to sell I'll be selling as well. But why fight the trend? Why fight against someone with an unlimited credit card? Why fight such a bullish long-term chart? Why keep losing money every day?

When the bears finally do get on the wagon, we'll know the top is here. But for now the top could be a long distance away.

Here are the links to our recent articles on the (HI):

November (HI) projections will be out this week. I think we'll see readings similar to October's as well as confirmation of the 17,000 DJIA and 1,850 S&P projections.  Stay tuned.