$FSLR is down close to five-percent in early trading that matches the movement of much of the solar sector. $FSLR also reports earnings tonight, which should see the stock post another sharp move when the market opens tomorrow.

The options market sees this move as being for almost $6, and that's an over-10-percent change so trading out-of-the money options will be a big gamble heading into tonight's report. Looking at $FSLR from a chart perspective I think there's a definitive direction that the stock will go post-earnings and it'll be a 20-plus percent move before the stock pauses from its rally.

$FSLR was almost a penny stock not long ago, falling from over $130 per share to less than $12. Since its lows the stock has put in a strong rally and I think the recent consolidation will result in higher prices going forward. Right now, it's has shaped in a nice cup and handle formation. This implies the next move for $FSLR is higher. The next point of resistance will be the recent $59 high, and a break of that price would be terribly bullish for the stock.

I don't think anyone sees $FSLR as a $75-plus stock by early next year, though, but if it does move higher out of this cup and handle I believe a rapid move to $75 could be in the cards. While trading tonight's earnings report via out of-the-money options could be risky, waiting for the premiums to die down early next week and initiating a January call position over $65 could be a very profitable move. 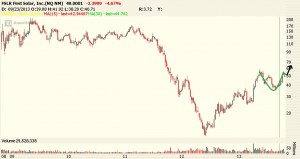