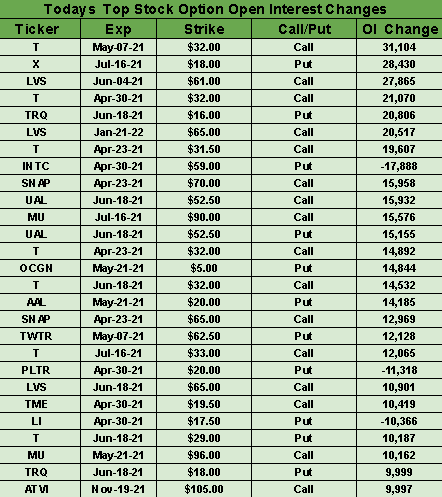 President Biden is set to announce tax increases on the wealthy as soon as next week to pay for an increase in funding for childcare and education. The proposal, called the "American Families Plan," would reverse some of former President Trump's tax cuts from 2017, while the capital gains tax for Americans making over $1M per year could nearly double to 39.6%. Coupled with an added 3.8% tax linked to the Affordable Care Act, that's a potential 43.4% levy. The new package would also include an increase in the top income tax rate, building on a recent infrastructure proposal to raise the corporate tax rate to 28%.

The news knocked sentiment on Wall Street yesterday, which turned south towards the end of what had been a positive session (unemployment claims hit a pandemic low). All of the major stock indexes ended the day down 1%, though the sentiment didn't carry into the overnight session, with futures inching up about 0.2%. "It is more of a short-term, knee-jerk reaction," declared Paul Nolte, portfolio manager at Kingsview Investment Management. Others say the upcoming proposal would be hard to pass in Congress.

Quote: "We're still finalizing what the pay floors look like," White House Press Secretary Jen Psaki told reporters, in response to questions about deterring long-term investing. "The president's calculation is that there is a need to modernize our infrastructure, invest in childcare and early childhood education, and he should propose a way to pay for it."

"His view is that can be on the backs of the wealthiest Americans, as well as corporations and businesses, who can afford it, and that won't have a negative impact," she added. "There are alternative views, and there are proposals that don't exist yet on how to pay for it. That will be part of the discussion."

Go deeper: Biden's proposals on capital gains would only affect the federal rate. Wealthy individuals who live in California and New York, which tax capital gains as regular income at 13.3% and 11.85% (plus 3.88% in NYC), would see total capital gains duties of nearly 60%. Could the changes shake up markets? While the top 1% have always controlled 70% to 80% of stock market value in the U.S., according to the Federal Reserve, the top 10% of households by net worth owned 87.2% of American equities in 2020, the highest level of ownership ever.

Biden's capital gains proposal also weighed on the price of Bitcoin (BTC-USD), which fell on Thursday for the sixth time in seven sessions. The slide pushed the crypto down as much as 8% to about $50,500, and it fell to the $48,000 level overnight. U.S. investors already face a capital gains tax if they sell the cryptocurrency after holding it for more than a year, and the fast action in alt-coin names like Dogecoin (DOGE-USD), Litecoin (LTC-USD), ZCash (ZEC-USD) - and plenty of others - is drawing comparisons to the late-2017 blow-off top in all cryptocurrencies.

Stats: Yesterday was the first time since 2018 that Bitcoin accounted for less than 50% of total crypto market cap.

Bitcoin futures volumes have soared in recent months, becoming a crucial part of the market that can intensify price swings in the underlying cryptocurrency itself. The quick drop earlier this week reportedly followed a large liquidation in futures contracts, highlighting some of the biggest growing pains for the crypto market.

Other news: One of Morgan Stanley's newly-offered Bitcoin funds has raised $29.4M from 322 investors just 14 days after opening. That already makes the fund among the most popular private investment vehicles for Bitcoin, but only clients with at least $2M in net worth may invest, and bet sizes are limited to 2.5% of net worth. The average investment in the fund was about $91K.

The scientist who helped develop the Pfizer/BioNTech (PFE, BNTX) vaccine, Dr. Ozlem Tureci, has said that the people who got vaccinated against COVID-19 will likely need a third shot as the immune response against the virus diminishes. Should booster shots be required, the government would likely need to make plans with drugmakers for additional supplies, as well as enhancing the network vaccine distribution.

Quote: "We see indications for this also in the induced, but also the natural immune response against SARS-COV-2," she told CNBC. "We see this waning of immune responses also in people who were just infected and therefore [it’s] also expected with the vaccines."

Annual coronavirus vaccinations could mean the jab would become like the seasonal flu shot. Tureci's views are in line with the comments from Pfizer CEO Alfred Bourla, who also said last week that the people might need a booster shot within six to twelve months of getting fully vaccinated.

By the numbers: Updating the top-line data from their Phase 3 study, Pfizer and BioNTech recently announced that their messenger-RNA-based vaccine had long-term effectiveness of 91% against COVID-19 from seven days through up to six months following the second dose. It also had more than 95% effectiveness against severe disease in the same time frame.

Commodity prices have risen over the last few months, but one in particular has been on a major rip: Wood. Lumber futures (LB1:COM) are used by a variety of traders to lock into prices and hedge against future risks. The contracts are up about 50% this year, currently trading at $1,324.50 per thousand board feet. That's well above the average prices have been for the past three decades.

There has even been calls for government intervention to help put a lid on prices. In late November, the U.S. Commerce Department lowered duties on Canadian lumber coming into the U.S. by more than half, from 20% to 8.9%. Some have also suggested the Biden administration should further cut tariffs on imports from Canada, which is the top lumber exporter to the U.S.

What's causing the price jump? Producers shuttered many loads of production last year as the coronavirus pandemic hit, expecting declining demand as the economy shut down. Instead, homebuilding continued at a much faster pace than forecast, while many people began DIY projects while they were stuck at home. Stockpiles of wood also got used up over the course of 2020 and the supply of new lumber is still not there (it takes a while to grow trees).

Outlook: Many expect the work-from-home model, or at least a hybrid model, to continue beyond the pandemic, as droves flee the city for the suburbs or to states where they can afford more space. The current wood shortage also highlights how manufacturing can resurface after the pandemic to stave off bottlenecks in supply. Operations will need to run at full speed to recover much of the lost ground.

In another first, SpaceX (SPACE) sends crew to ISS on used rocket.