For the past few months, the Energy ETF (XLE) has been in a corrective stage. It has severely underperformed the market and is currently 9% off its high. In my opinion, there are many reasons for XLE to bounce. 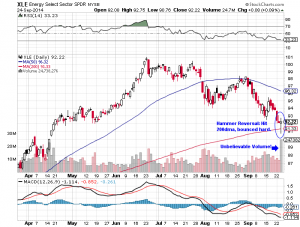 • First, XLE is oversold, as seen by its 30 RSI.
• Secondly, XLE has experienced a full correction. This means that the extreme optimism present in energy in the beginning of this year has been resolved.
• Most importantly, is the hammer reversal that XLE entered this morning: XLE tested its 200 DMA, its long-term support; it actually broke through it, only to close back above the 200 DMA and up on the day. A bullish hammer reversal is one of my favorite technical patterns, as it reveals a bottom has been reached.
• Lastly, XLE has one of its biggest volume days in over 5 months. This means that a lot of buyers took position and bought it off of the 200 DMA.

So, how am I playing XLE?

I think the best way to play XLE is through the December ATM call. The main reason is because I do not want to be affected by time-decay or any IV decline. But the other reason is that the broader market is in a consolidation phase, so I am not interested in playing short-term bounces. Rather, I want to play a Q4 rally. The December ATM call gives me exposure from now until year-end. It is more than possible that energy names continues to sell-off into the quarter-end, since it is the biggest market laggard. However, if this would happen, I think we will see a big inflow of money into the energy sector, as investors will position themselves for Q4.

Let’s now look at the chart of XLE. You will see is how successful it has been playing the 200 DMA. 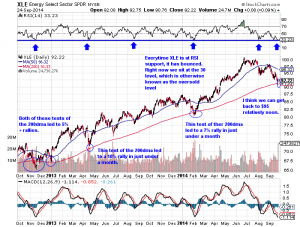 I am not exactly sure how long I will hold the trade. This trade may end up being just a 1-2 day hold; if XLE is up 1-3% tomorrow, I may take profits. Just because I buy the December call does not mean I intend to stay with it long-term. All it means is that I want to give myself time in case the trade takes longer to work out. I am in the December 93 calls @$2.74.