First to start off, selling a covered call with the stock is the exact same as selling a put that is covered. A covered put is when the total exercisable amount is covered by your account value, where as a naked put is when you only have 20-30%, depending on the margin requirement. A good way to look at this, would be if you were to buy a house; a covered put is when you buy the house in full where as a naked put is when you put a down payment but get a mortgage for the rest. If you want to be long for example AAPL with a $105 cost basis, selling the 105 covered call and the 105 put is the same (as long as the contracts are the same). For this installment of the covered calls series I decided to sell puts instead. There is no additional margin requirement for selling 1 put vs going long 1 covered call. The reason I am selling covered puts instead is because the spreads are too wide on the ITM calls to make money on the trade. With the IV so low it is hard to find options worth selling. The following are three picks for next month in which I like the r/r:

Chart below is of SPY as SPXL follows SPY. 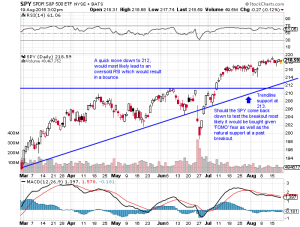 2.TSLA 205 covered put at $2.15. TSLA has been in a tight range for many weeks and I expect this to continue. Furthermore, the stock has been so resilient this year that I do not see what would suddenly cause  a 10% pullback over the next month.

3. TWLO 40 covered put at $.65. This is one of the only names to have an inflated IV in this market, therefore trade is simply going very far OTM and finding a price that I would be willing to go long common stock. 40 represents support on TWLO as it traded around there for much of its first month trading. 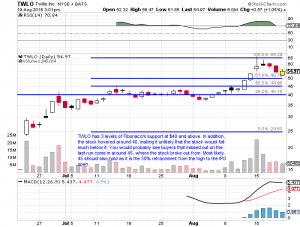 Each trade targets a 1-1.5% gain, while this is less than most months, this is only the case because of a depressed IV. With the potential for a small market pullback at the end of August I feel more comfortable going way OTM and only targeting 1-1.5% gains than doing closer to the money and increase the risk of having the options exercised.