Shutterfly(SFLY) is a stock i have talked about(on the Week Ahead Webinar and in the Chatroom) and traded quite a bit over the past few years. It's a stock I like and think it continues to be under-appreciated in the investment community. Similar to OpenTable(OPEN), its  leader in a niche market that has competition yet continues to be extremely resilient, an example of which is it's 51 straight quarters of YOY revenue growth.

The stock is down 22% to start 2014, and think it provides a nice risk/reward scenario for some out of the money June calls. Earnings after the close could also be the catalyst to get the stock back on course. 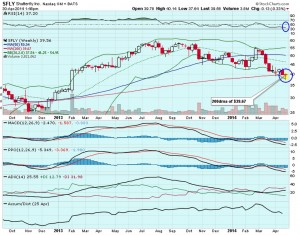