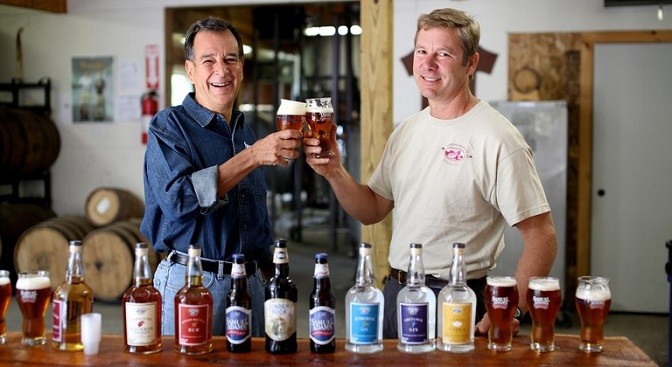 I do not like to be a told you so type of trader. We are all here to make money and pouring salt in the wounds of someone on the opposite side of a position is not what I would call 'proper etiquette'. So I wont go back to every person who came at me during Boston Beer's(SAM) incredible run up in 2013. A ride we have been on since late December when the stock crossed over $130 on a raised outlook. (First Article Here). We have been bullish almost to a fault... an uber-bull. One that has flooded Social Media with the type of posts and tweets that infuriated those who thought Boston Beer (SAM) sported bloated fundamentals and the run could not be sustained. They screamed as the stock soared to new highs, then cheered and kicked me to the ground when the stock dropped $20 in May on an EPS miss. They made sure to come and find me via twitter and on Stocktwits to let me know how wrong I was. There were countless responses to my blog posts trying to explain why Boston Beer (SAM) was overvalued using P/E ratios, competition, insider sales, and any other data point they could put their finger on.

I even had an argument on Seeking Alpha, my favorite contrarian content provider, over Boston Beer(BEER). At $150 folks were talking about it being overvalued...'Buy the Beer not the Stock" one article said. The other said "Why Beer Investors Have No Reason to Whine" : http://seekingalpha.com/article/1357311-why-beer-investors-have-no-reason-to-whine#comment-23411612

After refuting the negative article, this is what I said...mind you, it's April and the Stock is at $150:

If I was paid $5 everytime I had to argue with Bears on Boston Beer (SAM), I would be rich. High P/E ratio? Insider Sales? 30%+ move in a few months? Competition? Most Analysts with Sell ratings and every analyst with targets below the current share price? And of course bearish posts by folks on Seeking Alpha and other blogs.

Good luck to all! Going to help the EPS by drinking some more SAM -

And I still  kept plugging on and included Boston Beer (SAM) on my favorite stocks list every Sunday night on my Week Ahead Webinar. And here we are, 9 months since we we first fell in love with Boston Beer (SAM)  and the stock is now up more then 77% and $104 since the start of the year. If Boston Beer's (SAM) fundamentals were bloated at $150, I sure as heck lack the proper adjective to describe them now. Where are all the bears now? It actually scares me as all the negative articles and analysts are no where to be seen today. That is usually the time to start looking to lock some profits in.

And that is the key word... profits.

Our most recent trade on Boston Beer (SAM) found us getting calls into earnings at the start of August. We figured a solid beat and break of $200 was imminent and bought the $200 calls.

Here is our purchase:

Those $210 calls hit $30k in value today on a $900 investment. We did actually sells those earlier but still have the $230 calls which are sitting at $9.80. One of our many profitable option trades on Boston Beer (SAM) this year.

Here are some of the articles on Boston Beer (SAM) over the past 9 months:

And of course our call for Boston Beer  (SAM) to break the $200 barrier amongst all the negative sentiment:

Our conviction kept us in this trade despite numerous downward catalysts ..ie. Weak earnings, analyst downgrades, macro economic conditions...ect. Will Boston Beer (SAM) continue to move higher? That is the question of the day. We remain bullish on the overall market and think stocks like Boston Beer (SAM) will continue to benefit.

Check back for the next profiled stock to defy gravity and provide option traders huge profit potential.