$BIDU has been on quite a tear lately. Early last year, with the stock at $82, I went against all the analysts that said the stock was a sell. I said it was going to rally and break back over triple digits. I also observed that it was going to be "en fuego" ("on fire") again, which is exactly what's happened.

Here at OptionMillionaires.com, we pride ourselves on being ahead of the pack.

After $BIDU broke $100 it kept going and going, hitting over $170 a share recently. The analysts that were telling you to sell at the lows are now sheepishly raising their targets as $BIDU keeps going higher.

Here's what I'm looking at for $BIDU short term: the trade is a pullback off the $170 level, which has been a tough nut to crack the last couple weeks. Indeed, once the $170 level breaks $BIDU will see a rapid rise to $200, but until that event occurs I think the trade is for a pullback. 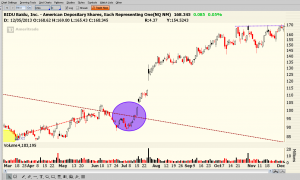