AAPL has continued to remain in its trading range for over a few months, and this trade is playing for it to remain in this range (125-133). Arguably, I am late to the game betting for consolidation but I think the consolidation will continue at least for a few more weeks. I have outlined a few good reasons as to why I am putting on this trade. The trade is the June 125/131/137 Call Butterfly for $2.02. I also purchased the May 29th 126/127/134/145 Iron Condor for $.25 (My hedges: Two long vertical spreads).

1st Reason: I do not see much of a market move until the June Jobs Number (two weeks away). There are no catalysts to move the market, yields have not bothered the market of late, Greece has become a non-issue, and the Fed said they aren’t going to move in June. Arguably the market should have a blue-sky breakout. Yet, if it was going to do so, I think it would have had some more power this week. The market is barely above its old high and it does not seem like there is a going to be new money pouring into the market. AAPL many times trades like the SPY does.

2nd Reason: AAPL did not see a continuation off of the Icahn letter. Do not forget that AAPL is up over 25% this year. So keeping that in mind I think my risk is limited as I see AAPL stalling at the old high and bouncing at the 50dma. Just because I am playing for a consolidation does not mean I need AAPL to be exactly at my short strike. I will still profit if AAPL is at $133,$134, $135 (as long as my hedges do not supersede my minimal gains at these levels).

3rd: Technically, AAPL is in a trading box. It has very strong resistance at 133, and with the volume low I think it is improbable for it to get by it because there will be a lot of sellers. The IV currently is at 18, which is near the 52 week low. While one may argue that the IV should now turn higher, which means that AAPL would become more volatile, I favor the argument that this means that AAPL will not move. There has been a lot of premium selling of late (which is why the IV has fallen), which means big institutions are selling premium.

I would like to sell the fly before the June jobs report, with the memorial day weekend coming up I expect a lot of time decay to kick in, which helps me out. 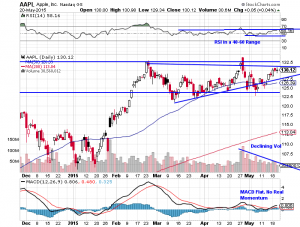