Weight Watchers (WTW) is a stock we have had on our radar for sometime and think it's most recent pull-back presents a buying opportunity. The shares of this recognizable brand have been under pressure over the past year as the company has continued to issue disappointing earnings reports as well as some missteps by management in regards to some debt financed share buybacks. But with the recent refinancing of it's debt, consistent cash flow, and oversold condition, we thing the shares are ripe to rebound over $50 in the short term.

There are also some possible positive catalysts on the horizon for the stock which should add some fuel to a possible rally. One being the recent recognition of Obesity as a Disease by the American Medical Association. The move should spur more doctors and health plan providers to focus on weight-loss programs, which could help with growth at Weight Watchers (WTW). There is also Weight Watchers (WTW) higher margin WeightWatchers.com which has continued to grow over the past few years and should help pad profits in coming quarters.

Last but not least, the companies trades at 9.8 times earnings, well below other publicly traded competitors. Any signs of revenue and profit growth in coming quarters could warrant a much higher multiple. At 15 times earnings the stock would trade over $60. Buying before the herd and ahead of the move is how you make money in this market. And we think Weight Watchers (WTW) stock presents that opportunity right now at $43.67.

We currently hold July 47.50 calls and will look to add to our position over the next week or two. 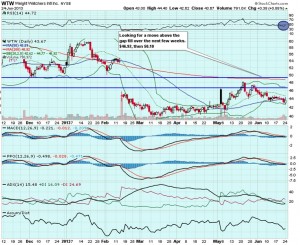