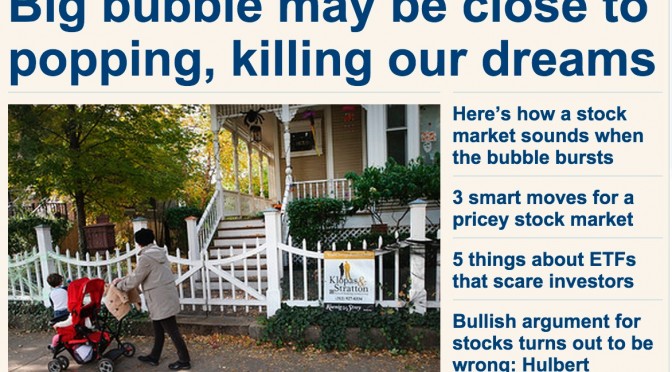 "Big bubble close to popping, killing our dreams"   That was the headline 2 years ago.  Yet here we are ...the S&P500, NASDAQ, and Dow Jones Industrial average closed Friday near all time record highs.   Bubble pop averted.... for now.    If the price of the stock market was a proxy for the economy the indices would in all likelihood not be trading at these levels.  Right?

Let's take a deep breadth.  We escaped 2016 without that 99% certain market crash:

If we you've learned anything since the lows in March 2009 the value of the stock market isn't based solely on how well the economy is doing.  The ECB is buying junk bonds.  The Swiss and Japanese are buying ETF's.  The Chinese are jailing short sellers.  Countries just years removed from near bankruptcy are selling bonds at record low yields.   And yet, despite all this massive central bank action, those same pundits calling for a market correction the last 7 years are calling for one again.  It's a fake bull market.  It's full of hot air.   Call it what you will, but prices keep heading higher.

I continue to read the same sad tales of just how bad this market is going to be in 2017 because of the massive amount of  government debt and the threat of higher interest rates.  Many of these articles read more like a best selling novel than an opinion on the market.  It almost feels like they are selling fear.   And all you have to do is go back each year 2015, 2014,2013, 2012, to read the same sad outlook.

'the market hasn't had a real correction in a long time, we are overdue'

Every financial site and blogger in the world can talk negatively about the stock market at the same time, but the reality is the market itself has the final word.  And since the lows in March 2009 the final word for all those persistent pundits continues to be "WRONG"

However we know after being wrong for 7+years, the minute they are right we will hear about it countless times in the years ahead.  Ali-Baba top be damned.  Books will be penned.  T.V. appearances made.  Ticker tape parades planned.  But for now the market continues on its constant market to record highs, excuses to sell be damned.  Yeah excuses....

This time around its the Trump Inauguration.

In early November it was the election night, and sell they did, at least initially.   Futures fell 5% lower.  It was limit down.  And then the market recovered.

Well maybe the electorates will bail on Trump.   They didn't.  And now here we are just days away from Trumps inauguration.  It's another chance for the pundits to throw their manure at the wall and see how long it sticks for.

Maybe this time it will stick.  Perhaps the market has topped.    The Trump Inauguration will be what finally pricks the stock market bubble.

But we know better don't we.  This market has more legs than a centipede born at the Fukishima power plant. It continues to defy the pundits.

I think the VIX is headed under 10 in the coming weeks.

The NASDAQ will continue its breakout over the coming weeks.

Enjoy the rest of your long weekend.