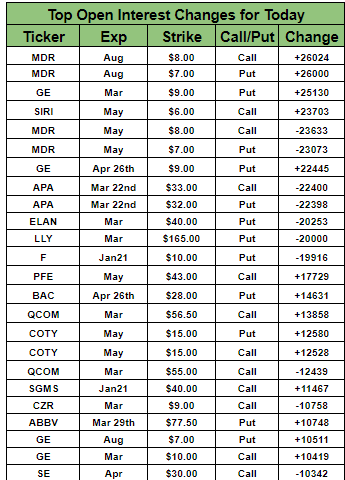 U.K. lawmakers will vote later today on whether Britain should leave the EU on March 29 without any agreement after parliament rejected Theresa May's withdrawal accord on Tuesday. If they vote for no deal, lawmakers will get a third vote tomorrow on whether to delay the March 29 exit date. Under a temporary plan, the U.K. government also said it won't apply tariffs on most goods imported into the country in the event of a no-deal Brexit and there would be a "temporary, unilateral approach" that wouldn't require checks at the Irish border. Sterling +0.6% to $1.3149.

It looks like another mixed session ahead for U.S. indexes. Dow futures are down 22 points amid more blows to heavyweight Boeing (NYSE:BA) - as more countries ground the company's 737 MAX planes following its second fatal crash in months - while the S&P 500 and Nasdaq point to slight gains. A slew of economic data is also set to be released, with investors eyeing durable goods figures, PPI numbers and construction spending.

The European Union will not negotiate Brexit again, according to EU Brexit negotiator Michel Barnier. "Should there be a U.K. reasoned request for an extension, the EU27 (27 EU nations) will consider it and decide by unanimity... and expect a credible justification for a possible extension and its duration," the bloc declared, adding that any Brexit delay must not interfere with EU parliamentary elections due on May 24-26.

While many companies intend to move operations out of the U.K. due to Brexit, others are doubling down on their plans to stay. Regardless of the final Brexit outcome, BP said it will not leave the United Kingdom, where it employs 16K of its 74K employees. As for how the oil and gas giant is preparing for Brexit, CEO Bob Dudley responded, "We deal with uncertainty all the time all around the globe."

Another EU nation may be joining China's Belt and Road Initiative: Malta. "You have to be careful, but for a country to survive and to be competitive, especially a small country, we need to have diversification," said Edward Scicluna, Malta's finance minister. Earlier this month, Italy - the eurozone’s third-largest economy - signaled its interest in joining the Chinese plan.

Boeing shares are down another 1.3% premarket, bringing total losses since Monday to 13%, as airlines and countries around the globe continue to ground 737 Max aircraft. Some, like Norwegian Air, are even demanding Boeing (BA) pay compensation for lost revenue and extra costs stemming from the grounding of their 737 MAX fleet. The U.S. Senate Commerce Committee further plans to hold a hearing on the aircraft despite the FAA confirming the jet's safety.

United Autos Workers President Gary Jones is set to speak today at the union's bargaining convention in Detroit. The three-day conference, which began Monday, is a critical part of the union’s preparations for bargaining this summer with the Big Three automakers - General Motors (NYSE:GM), Ford (NYSE:F), and Fiat Chrysler (NYSE:FCAU)- as well as other industries and workplaces.

Uber Technologies has hired a string of investment banks to its syndicate of IPO underwriters as smaller rival Lyft (LYFT) races to publicly list at the end of March, Reuters reports. Like Lyft, Uber (UBER) filed confidentially for an IPO in December. Its bankers have indicated it could be valued at as much as $120B, while Lyft could be valued closer to $25B in its IPO.

Tesla has laid off half of its global recruiting team in another eye-popping measure aimed at cutting costs, sources told Electrek. Many of the 150 jobs eliminated had also nothing to do with retail recruiting for stores (cuts related to the outlets wouldn't be unexpected ahead of the pivot by the company to an online sales strategy). TSLA -0.6% premarket.

One fund is going a step further in the race to zero-fee ETFs. Salt Financial's Low TruBeta US Market ETF, which would trade under the ticker "LSLT", plans to track an index of about 100 low-volatility stocks and will temporarily pay people to invest for at least the first year. The less-than-two-year-old firm already runs a $10M ETF called the Salt High Trubeta US Market ETF (NYSE:SLT).

Apple's new subscription magazine service, expected to be announced during a March 25 press event, will reportedly be "PDF-based" and work even when users are offline. The service may largely be based on the digital magazine platform Texture that Apple acquired last year, which is still live, and charges $9.99 a month for access to more than 200 magazines. Apple (NASDAQ:AAPL) has been interested in bundling subscription news services, too, which might raise the price.

As part of a broad overhaul, Kraft Heinz (NASDAQ:KHC) continues to put long-time brands on the block. One of the latest is its Breakstone’s division, which could fetch a valuation of roughly $400M. Kraft Heinz is also weighing the sale of its Maxwell House coffee business and last year announced the sale of its Canadian natural cheese unit to Italian dairy group Parmalat (OTCPK:PLATF).

Tobacco and e-cigarette stocks fell modestly yesterday in apparent response to the naming of NCI Director Norman Sharpless to head the FDA. Considering his background, investors expect him to have a critical eye on the sector, especially among use by young people. Scott Gottlieb, who announced his surprise resignation less than two years after taking the post, was quick to offer a thumbs up.

Rite Aid +17.9% premarket on news that CEO John Standley is leaving the company in a restructuring aimed at cutting costs. As a result, Rite Aid (NYSE:RAD) expects to achieve $55M in annual cost savings - with $42M realized within FY 2020 - and will incur a one-time $38M restructuring charge to achieve the targets. In addition to Standley, COO Kermit Crawford and CFO Darren Kast will leave the company.

Pharmacy benefit managers are getting their day on Capitol Hill. After grilling pharma executives last month, the Senate Finance Committee has invited Cigna (NYSE:CI), CVS (NYSE:CVS), Humana (NYSE:HUM), OptumRx (NYSE:UNH) and Prime Therapeutics to testify about high prescription drug costs in the U.S. on April 3. PBMs, which negotiate drug benefits with manufacturers for insurance plans and employers, have been blamed for pocketing discounts instead of passing them along to patients.