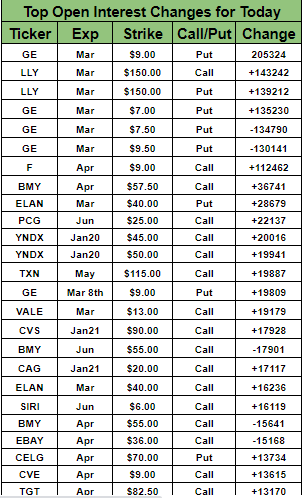 The FDA has approved the first drug to treat depression in decades, paving the way for Johnson & Johnson (NYSE:JNJ) to sell a nasal spray based on ketamine, which is often used as a party drug with the nickname "Special K". Esketamine, which will be sold under the brand name Spravato, will be available for adults who have already tried at least two other antidepressant treatments. The fast-acting drug will cost between $590 and $885 (before discounts and rebates) depending on the dosage. JNJ +0.5% premarket.

U.S. stock index futures are pointing to a lower open, with Dow futures down 48 points and the S&P 500 and Nasdaq slightly in the red. Shares in Europe and Asia were mixed overnight, with only China seeing some significant gains, closing the session up 1.6%. Beijing announced billions of dollars in stimulus measures on Tuesday, including tax cuts and infrastructure spending needed to reduce the risk of a sharper economic slowdown.

Australia reported lower than expected growth last year as it battled a steep housing downturn, lackluster consumer spending and trade challenges with slower growth in China. Annual GDP expanded 2.3%, the slowest since mid-2017 and below expectations for a 2.5% increase. The Australian dollar fell as much as 0.8% against the greenback to $0.7026 on the news, its lowest level since early January.

Italy plans to sign a memorandum of understanding to become a part of China's Belt and Road Initiative by the end of March, marking the first endorsement by a G7 nation, FT reports. Tensions? The support would likely undercut U.S. pressure on China over trade and undermine Brussels' efforts to overcome divisions within the EU over the best approach to deal with Chinese investments.

The global economy will continue to weaken this year, according to the OECD, weighed down by trade disputes and uncertainty over Brexit. The interim outlook report showed GDP growth averaging around 3.3% in 2019, down from the 3.5% seen in the OECD's last forecast in November (which was already cut from 3.7%). "A sharper slowdown in any of the major regions could derail activity worldwide, especially if it spills over to financial markets," said Laurence Boone, the OECD's chief economist.

Carlos Ghosn, the former chairman of Nissan (OTCPK:NSANY), Renault (OTCPK:RNLSY) and Mitsubishi (OTC:MMTOY), has been released on nearly $9M in bail, giving the car titan fresh impetus to craft his defense against financial misconduct charges in Japan. The decision, which came after two previous bail requests were rejected, came thanks to a new high-profile team of lawyers with significant defense experience and a series of assurances that he would remain in Tokyo.

General Motors is expected to end production on the Chevrolet Cruze at its assembly plant in Ohio today after coming in ahead of schedule with the final manufacturing push. The plant is one of five in North America being closed by GM in part to adjust to softer demand for passenger cars. The company is offering employees jobs at other locations, although in some cases hundreds of miles away.

Tesla's second-largest stakeholder behind Elon Musk doesn't fear his ouster as he faces contempt of court allegations over his standoff with the SEC. "We wouldn't be against him having a different role," said James Anderson, head of global equities for Baillie Gifford. "I don't think he needs to be CEO." The U.K.-based investment firm owns 7.7% of Tesla (NASDAQ:TSLA) - or roughly $3.8B worth of shares - according to FactSet.

Uber isn't criminally liable in the 2018 fatal crash involving one of its self-driving vehicles and a pedestrian, according to Arizona prosecutors, but the car's backup driver should be referred to area police for additional investigation. The decision removes one potential headache for UBER as it tries to resolve a long list of federal probes, lawsuits and other legal risks ahead of an IPO this year.

U.S. District Judge William Alsup is demanding PG&E (NYSE:PCG) abide by rules governing how the utility operates its power lines in California, seeking to reform "dismal" management that led to a series of wildfires over the past two years. One requires the bankrupt company to suspend issuing any dividends until it is in compliance with state laws that require it to trim or remove trees and branches growing within specified distances of its power lines.

General Electric fell nearly 5% on Tuesday after CEO Larry Culp said the company expects to see negative cash flow in 2019 from its industrial business, mainly due to ongoing weakness in its power unit. "This is a multiyear turnaround in power," he declared. "I don't want to sugarcoat that in any way, shape or form." GE also sees organic revenue increasing in the low-to-middle single digits in 2019.

There's an mega-merger brewing in the U.S. insurance industry that could have a read-across for European peers. Aon (NYSE:AON) said it is exploring a combination with rival brokerage Willis Towers Watson (NASDAQ:WLTW), confirming a Bloomberg report from Tuesday afternoon. It would be the industry’s largest ever tie-up as Willis Towers Watson has a market value of about $24B.

Wall Street banks and hedge funds are closing in on a fix they hope will clean up an $8T portion of the CDS market that's gained a reputation for being one of the shadiest corners in finance. After months of negotiations, Goldman Sachs (NYSE:GS), JPMorgan (NYSE:JPM), Apollo Global (NYSE:APO) and Ares Capital (NASDAQ:ARCC) have agreed to a plan that's intended to ensure defaults are tied to legitimate financial stress, not traders' derivatives bets, Bloomberg reports. The International Swaps and Derivatives Association may propose the overhaul as soon as today.

Meanwhile, the Fed is considering imposing stricter rules on foreign bank branches to tighten what critics say is a loophole that has allowed overseas lenders to shield assets from tough U.S. bank rules. The changes could be a blow for lenders like Deutsche Bank (NYSE:DB), Credit Suisse (NYSE:CS) and UBS (NYSE:UBS), which have for years held billions of dollars in assets, such as corporate loans, at their New York branches.

FDA Commissioner Scott Gottlieb, who, by most accounts, was doing a bang-up job revitalizing the agency, has resigned (effective in about a month) to spend more time with his family. His departure could stall his tobacco and e-cigarettes initiatives considering the White House's anti-regulatory stance, although President Trump liked the Commissioner and did not want to see him leave.

According to internal company documents reviewed by Reuters, Philip Morris (NYSE:PM) has for years paid production costs to Indian partner Godfrey Phillips to make its Marlboro cigarettes, circumventing a nine-year-old government ban on foreign direct investment (FDI) in the industry. India has prohibited FDI in cigarette manufacturing since 2010, saying the measure enhances its efforts to curb smoking.

KFC and Pizza Hut's owner in China is pushing ahead with expansion plans, opening two stores a day in the world's biggest consumer market. The outlets are banking big on technology, taking payment by facial recognition and having ice cream served by robotic servers, while customers can control background music through their mobile phones like a new-age jukebox. Spun off in 2016 from parent Yum! Brands (NYSE:YUM), Yum China (NYSE:YUMC) shares have jumped 24% YTD.

Grab is considering raising even more funds from strategic investors after raking in over $4.5B in Southeast Asia's largest private financing round that values the ride-hailing giant at $14B. The latest cash injection kicked off after UBER surrendered its Southeast Asian operations to GRAB in March 2018 following a costly battle. In return, it took a 27.5% stake in Grab's business.