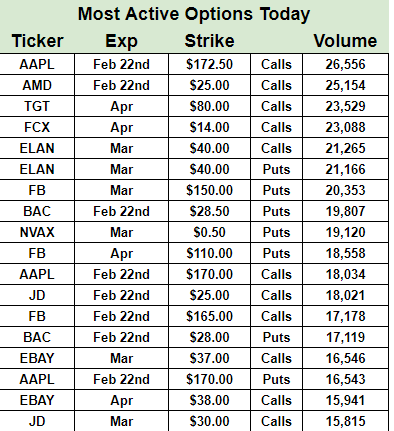 Markets today will be eyeing minutes from the Fed's January meeting, the one where Jerome Powell did an about-face and indicated that the central bank could hold off on raising rates. Next big market catalyst? Balance sheet normalization will likely be discussed, with Wall Street believing the Fed will end its roll-off by the end of the year. More clues will also be sought on what the minutes could mean for yield curve inversion trade, as well as the recent boost to stocks following the wildness of late 2018.

The U.S. wants China to agree to keep the yuan stable as part of the demands being put forth in current trade talks, while Beijing wants Washington to respect its right to develop and become prosperous. President Trump said on Tuesday that the discussions were going well and suggested he was open to pushing off the deadline to complete negotiations, outlining March 1 was not a "magical" date.

Expectations are low as Theresa May heads back to Brussels today to find a way out of the Brexit impasse, despite clear statements from EU officials that they won't reopen the divorce deal. Even if she secures some kind of assurance over the temporary nature of the Irish backstop, it's not clear if that would placate Brexiteers in her own party who helped defeat her deal in parliament.

Several big companies have begun to prepare for the disruption that could ensue following Brexit, with Britain currently at risk of leaving the EU without a deal on March 29. Kellogg (NYSE:K) is opening new warehouses and loading up on its snacks, cereals and raw materials, while Mondelez (NASDAQ:MDLZ) is increasing transportation capacity in the U.K. and stockpiling all of its European-made products.

Hedge funds loaded up on tech stocks at their fourth-quarter bottom, just in time to catch their double-digit rebound and Q1 comeback. Facebook (NASDAQ:FB) was the most-owned stock, followed by Microsoft (NASDAQ:MSFT), Alphabet (GOOG, GOOGL), Amazon (NASDAQ:AMZN) and Alibaba (NYSE:BABA), according to Citi Research. The bank reviewed the regulatory filings from the largest 50 hedge funds by value of securities that documented their top 10 holdings at the end of December.

Media mogul (and now tech mogul) Barry Diller is weighing in on the media industry topic du jour - whether a tipping point of power has now been reached in the streaming evolution. "Hollywood is now irrelevant," he said on the latest episode of Recode Decode. "Netflix (NASDAQ:NFLX) has won this game. No one can get, I believe, to their level of subscribers, which gives them real dominance."

Qualcomm is urging U.S. trade regulators to reverse a judge’s ruling and ban the import of some iPhones in a long-running patent fight between the companies. Qualcomm (NASDAQ:QCOM) is seeking the penalty in hopes of dealing Apple (NASDAQ:AAPL) a blow before the two begin a major trial in mid-April over the chipmaker's patent licensing practices. The case was brought to the U.S International Trade Commission in 2017.

Big investors are pushing natural resource companies to take firmer action on climate change, and Glencore (OTCPK:GLNCY) is the latest to respond. The world's top coal exporter has vowed to cap its production at about 150M tons per year, with further expansion of its coal business largely ruled out. The decision, which aligns to the goals of the Paris climate change agreement, is likely to send shockwaves across the coal industry.

The U.S. government has reached a settlement with Teva Pharmaceuticals (NYSE:TEVA) over keeping generic drugs off the market. That includes the FTC dropping claims against Teva and affiliates across three outstanding cases, as well as modifications to some terms from a 2015 consent decree. The agency has said that the deals cost consumers billions annually in higher drug costs. TEVA -1.3% premarket.

As part of a restructuring meant to end losses around the world, Ford (NYSE:F) is closing its oldest factory in Brazil and exiting its heavy commercial truck business in South America. The decision comes months after pursuing viable alternatives. Ford previously said the global reorganization, to impact thousands of jobs and possible plant closures in Europe, would result in $11B in charges.

Self-driving tech timetable... Elon Musk reiterates his expectations that Tesla (NASDAQ:TSLA) full self-driving technology will be available by the end of the year. "Meaning the car will be able to find you in a parking lot, pick you up and take you all the way to your destination without an intervention, this year. I would say I am of certain of that. That is not a question mark."

Nissan and Renault appear to be headed for a clash, just as the two partners hope to salvage an alliance shaken by the ouster of former boss Carlos Ghosn, FT reports. Nissan's (OTCPK:NSANY) independent committee on governance is expected to recommend against the company having the same chairman as Renault (OTCPK:RNLSY): Jean-Dominique Senard. That may require a revision to their alliance agreement, which is likely to be contentious.

President Trump has signed a directive ordering the Pentagon to draft legislation and create a Space Force as the sixth U.S. military branch. If approved by Congress, it would mark the first new military division in 72 years. "Our adversaries are training forces and developing technology to undermine our security in space, and they're working very hard at that," Trump told reporters at the White House. Related: BA, NOC, LMT, AJRD, SPACE, BORGN