Image of the Day (Bloomberg)

Some of the Top  Open Interest Changes for Today: 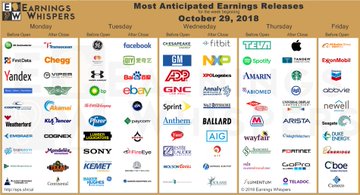 European stocks advanced overnight, tracking a rebound across Asia, as U.S. futures extended gains on the last day of what's been one of the nastiest months for equities in years. The S&P 500 is off by 7.9% in October, on track for its worst showing since May 2010. Equity bulls will be hoping this rebound can last in November, though risks are simmering in the background, including upcoming earnings results, the U.S. jobs report and midterm elections.

Chinese equities tracked gains on Wall Street, with Shanghai up 1.4%, despite a weak reading on the nation's factory activity. The official manufacturing PMI index came in at 50.2, short of estimates and pushing it closer to the 50-point line separating expansion from contraction. In other news, the PBOC said it will issue a total of 20B yuan of bills out of Hong Kong next month, its first issuance in the former British colony and the world's biggest offshore yuan clearing center.

The Bank of Japan opted to hold rates at -0.1% at its October meeting, while trimming inflation forecasts and saying it will purchase 10-year Japanese government bonds to maintain the yield at "around zero percent." This will see the BOJ fall even further behind global peers in normalizing policy amid its long battle to stoke inflation, which it now expects to remain below its 2% target until at least early 2021.

A landmark free trade deal that will slash tariffs across much of the Asia-Pacific region will come into force at the end of December after Australia became the sixth nation to formally ratify the agreement. The original TPP was thrown into limbo early last year when President Trump withdrew from the pact, but the remaining nations finalized a revised version in January called the Comprehensive and Progressive Agreement for Trans-Pacific Partnership.

India's rupee and bonds lost ground overnight amid rumors that Urjit Patel, the Reserve Bank of India governor, was on the brink of resigning after a tense standoff with Prime Minister Narendra Modi’s government. At issue are efforts to influence central bank policies and other sensitive matters, most notably the administration's push to access some of what it considers the RBI’s "excess" reserves to shore up public finances.

"At this point, a couple more interest rate increases are necessary to stabilize growth at a sustainable pace and stabilize the labor market so it doesn't overheat," former Fed Chair Janet Yellen told the Charles Schwab Impact conference in Washington, D.C. "If I had a magic wand, I would raise taxes and cut retirement spending," she added, characterizing the U.S. debt path as "unsustainable."

Earnings headlines yesterday morning centered around General Electric (NYSE:GE), which slashed its quarterly dividend to $0.01 as it restructured its troubled Power division. The conglomerate also disclosed a DOJ probe of its accounting practices, sending shares below $10 for the first time since April 2009. After the closing bell, attention turned to Facebook (NASDAQ:FB), which posted a healthy profit beat and nearly in-line revenues, but user growth disappointed some observers. Shares rose 3.1% AH.

While it slashed 2018 capex by more than a quarter, Samsung Electronics (OTC:SSNLF) reported a record 17.6T won operating profit in Q3, in line with the company's estimate and representing a jump of around 21% from a year earlier. "Looking further ahead to 2019, earnings are forecast to be weak for the first quarter due to seasonality [higher holiday marketing spend], but then strengthen as business conditions, particularly in the memory market, improve," Samsung said in a statement.

T-Mobile has landed shareholder approval for its buyout of Sprint (NYSE:S) and expects to close the deal in the first half of 2019 after receiving regulatory approvals. "This is another step forward in creating the New T-Mobile, so we can deliver on our promise to bring robust competition to the 5G era, giving consumers more for less and creating jobs," T-Mobile (NASDAQ:TMUS) CEO John Legere declared.

Google CEO Sundar Pichai has sent an internal email condoning an employee protest planned for tomorrow in the wake of a bombshell NYT report about sexual misconduct at the tech titan. Pichai clarified that the company did not provide exit packages to those employees and had heard "constructive ideas" from many workers on how to improve Google's (GOOG, GOOGL) processes.

CVS is piloting a program in Boston that includes free delivery on most prescriptions and online purchases, access to a pharmacist helpline, a 20% discount on all CVS-branded products and a monthly $10 coupon. Called CarePass, a membership costs either $48 annually or $5 monthly. It comes after Amazon (NASDAQ:AMZN) acquired online pharmacy startup PillPack, seen as a major threat for the industry as the e-commerce giant heads into the prescription drug business.

Automation continues to evolve the grocery sector, with Albertsons (NYSE:ACI) looking to computerize the packing of its online grocery orders via a trial partnership with Takeoff Technologies. Instead of workers walking around the store to pick up items for delivery, artificial intelligence-enabled technology and robotic conveyors will bring the goods to an Albertsons employee, who will manually compile the order.

M&A roundup: Arconic (NYSE:ARNC) rose 7.1% AH following a Reuters report that Apollo Global Management (NYSE:APO) was in advanced negotiations to buy the company for more than $11B, beating out the consortium comprising Blackstone (NYSE:BX), Carlyle (NASDAQ:CG) and others. Competition is also heating up to acquire Papa John's (NASDAQ:PZZA) as Bain and CVC join KKR and Roark Capital in vying for the slumping pizza chain.

Following an initial announcement made in June that the two companies would explore areas of cooperation in the fields of AI and connectivity, Ford (NYSE:F) and Chinese internet giant Baidu (NASDAQ:BIDU) said they are now teaming on self-driving cars. The two-year initiative will see the firms collaborate to meet the Level 4 standard set by U.S. industry organization SAE International - meaning autonomous vehicles developed by the two will not require intervention from a human driver.

More self-driving news... Alphabet's (GOOG, GOOGL) Waymo has become the first company to receive a green light from the state of California to operate driverless vehicles without a backup driver in the front seat. The permit includes day and night testing on city streets and rural roads, even in foggy or light rain conditions, and on highways with posted speed limits of up to 65 mph.

Elon Musk bought $10M of shares in Tesla (NASDAQ:TSLA) on Monday and "committed" to buying additional shares worth about $20M, according to an SEC filing. Before the purchases, he held a stake of more than 19% in Tesla. Musk also abruptly replaced at least seven members of SpaceX's (SPACE) senior management team, with a mandate to launch its Starlink satellites - a new satellite-based Internet service - by the middle of next year.

Indonesia's military chief believes that the body of the crashed Lion Air jet has been found. Divers have been deployed to search for the Boeing 737 MAX 8 (NYSE:BA) and are using "pinger locators" to zero in on the aircraft's cockpit recorders. Experts speculate a problem with the aircraft's pitot tubes - instruments used to calculate airspeed and altitude - may have contributed to the crash.

FedEx is ending a program that offers discounts for business members of the National Rifle Association just days after a gunman killed 11 people in a Pittsburgh synagogue. The logistics company said the closure of its NRA discount program from Nov. 4 has no connection to the incident or any other shooting, but rather the NRA didn't bring in enough business to merit its own FedEx (NYSE:FDX) deal.