Let's say earnings growth did peak in Q1. What does it mean? 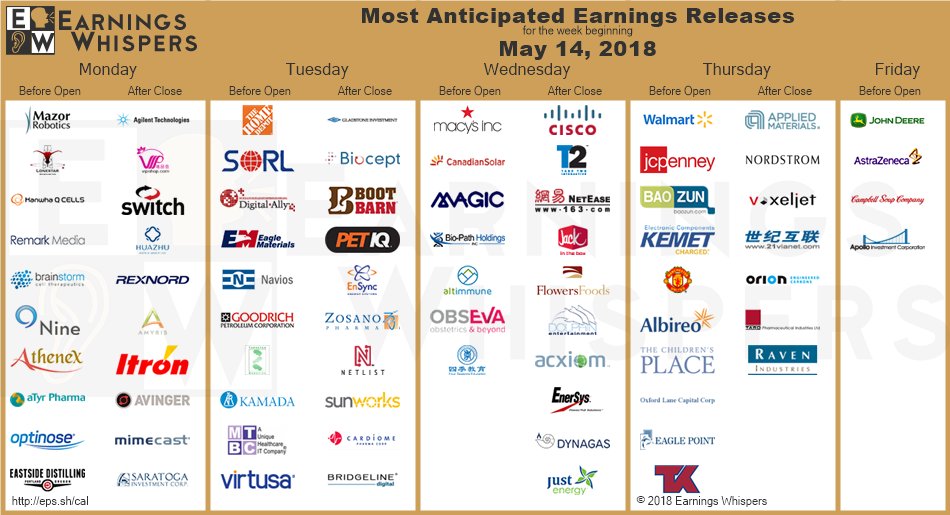 Mexico sees diminishing chances for a new NAFTA deal ahead of tomorrow's deadline - given by U.S. House Speaker Paul Ryan - that would allow for the pact to be approved before a newly elected Congress takes over in January. Further complicating talks are Mexico's presidential election, which is less than seven weeks away, as well as impending steel and aluminum tariffs, scheduled to hit Mexico and Canada on June 1.

"The recent jump in oil prices will take its toll," according to the IEA's monthly report, which cut global demand growth to 1.4M barrels per day for 2018, from a previous estimate of 1.5M bpd. OPEC and its allies have finally succeeded in their 16-month campaign to clear a global oil glut and markets are set to tighten further as output sinks in Venezuela and the U.S. re-imposes sanctions on Iran.

Eurozone inflation eased from 1.3% to 1.2% in April, confirming an earlier flash estimate and adding to the headache of ECB policy makers seeking to phase out a €2.55T bond-purchasing scheme. The central bank's "below, but close to 2%" target has proved to be an elusive one, with the euro area economy showing further signs of slowing growth this year.

China sold $2.5B of Treasuries in March amid heightened trades tensions between Beijing and Washington. The largest foreign holder of U.S. Treasuries joined other countries in selling long-term U.S. government debt with a maturity over one year, having been a net buyer in January and February. Despite the selling activity, China's overall holdings increased by $9B to $1.19T due to changes in Treasury prices.

Casting a shadow on reflationary "Abenomics" policies, Japan's economy shrank by 0.6% on an annualized basis in Q1. That marks the end to eight straight quarters of GDP expansion, the nation's longest growth streak in 28 years. Economists say the contraction will be temporary, but there is a chance that trade friction with the U.S. will hurt export demand.

North Korea is expanding on its threat to cancel the June 12 summit between Kim Jong-un and President Trump. Besides protesting the joint air force drills taking place in South Korea, Pyongyang said the U.S. must stop insisting it "unilaterally" abandon its nuclear program and lashed out at national security advisor John Bolton, who talked about a disarmament similar to "Libya 2004."

Explosions are intensifying on Hawaii's Kilauea volcano, spewing ash and triggering a red alert for aircraft for the first time since the latest eruption began 12 days ago. The tourism industry is taking a downturn as a result. Big Island summer hotel bookings dropping by almost half from last year, according to the Island of Hawaii Visitor Bureau.

Amazon has fired another shot in the supermarket wars, debuting a Prime loyalty program that includes an extra 10% off on sales items and weekly discounts at Whole Foods. The retail giant is also bringing Amazon Go (NASDAQ:AMZN), its grocery store without checkout lines, to Chicago and San Francisco. The move will expand the concept beyond its pilot in Seattle.

Flush with cash from its deal with Nestle (OTCPK:NSRGY), Starbucks (NASDAQ:SBUX) is looking to double down on the Chinese market as traffic growth comes under pressure in the U.S. The coffee chain hopes to more than triple its revenue and almost double its store count in China over the next five years. It currently has around 3,300 stores in 141 cities across the country.

Heads are starting to roll as corporations seek to separate themselves from Michael Cohen. Novartis (NYSE:NVS) has announced the departure of general counsel Felix Ehrat over his role in a $1.2M contract it struck with President Trump's personal lawyer, stating the pact was legal but an error. The company has also been trying to clean up its image after a series of bribery scandals.

Twitter is turning to greater automation to deal with its troll problem. If algorithms and human reviewers see a user exhibiting abusive behavior, the messages will be pushed down to the bottom of the tweet's replies. According to the company, "this is to improve the health of the conversation and improve everyone's Twitter (NYSE:TWTR) experience."

With Supreme Court action spurring a sea change in sports betting, British firm Paddy Power Betfair (OTC:PDYPF) is in talks to buy FanDuel (DUEL). The U.S. daily fantasy sports company was part of merger discussion last year with rival DraftKings (DRAFT) - which is likely keeping an eye on any pricing - but the plan was scrapped in July after a legal challenge by the FTC.

Kellogg has discontinued its operations in Venezuela due to the ongoing social and economic distress in the nation. "I've decided to hand the company over to the workers so that they can continue producing for the people," President Maduro said at a campaign rally ahead of Sunday's presidential election. "We've begun judicial proceedings against the business leaders of Kellogg (NYSE:K) because their exit is unconstitutional."

Both sides appear to be claiming victory after the World Trade Organization ruled that the EU provided illegal subsidies for Airbus's (OTCPK:EADSY) A380 and A350 jets that compete with Boeing’s (NYSE:BA) 747 and 787 Dreamliner. But the WTO also dismissed U.S. claims that loans for the A320 and A330 were costing Boeing significant sales, thus narrowing the scope of the ruling.