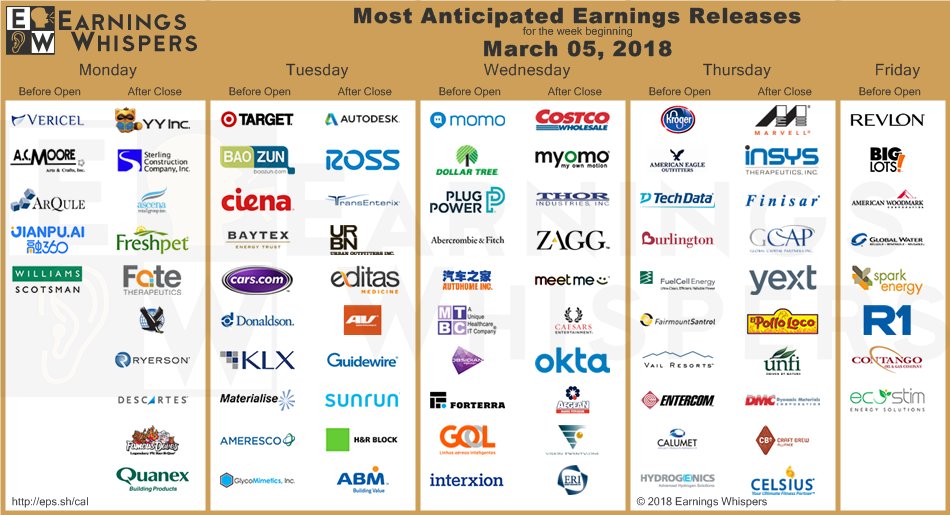 Widely viewed as a voice for Wall Street in the White House, Gary Cohn has announced his resignation as the top economic adviser to President Trump, fanning fears of protectionist tariffs and a full-blown trade war. Markets tumbled on the news overnight, while the dollar slumped. Trump tweeted he "will be making a decision soon" on replacing Cohn, who oversaw a major revamp of the U.S. tax code and pushed for a significant rewrite of financial rules.

No one emerges victorious from a trade war, IMF Managing Director Christine Lagarde told French radio station RTL, recommending "an agreement between the different parties, and talks." "The macro-economic impact would be serious, not only if the U.S. took action, but especially if other countries were to retaliate, notably those who would be most affected, such as Canada, Europe, and Germany in particular."

Senior White House adviser Jared Kushner will visit Mexico today and meet President Enrique Pena Nieto, just a week after the two countries called off a meeting amid disagreements about border wall funding. The talks, which will also include a U.S. delegation of the State Department and National Security Council, will focus on immigration, security, trade and economics.

The Department of Justice is suing California over three state statutes that federal officials say interfere with their immigration authority. Under the Trump administration, the DOJ has tried a mix of political and financial pressure against sanctuary cities, threatening to cut off grants or remove ICE agents unless they agree to identify and hold suspected immigration offenders.

China's foreign exchange reserves fell $27B to $3.134T in February, posting their first decline in 13 months, as the yuan weakened against the U.S. dollar amid wild market swings. Capital flight was seen as a major risk for China at the start of 2017, but a combination of tighter capital controls and a faltering greenback helped the yuan stage a turnaround.

North Korea is willing to hold talks with the U.S. on denuclearization and will suspend nuclear tests while those talks are underway, the South said after its delegation returned from Pyongyang. While President Trump called the steps "acting positively," the U.S. imposed additional sanctions after deciding a chemical warfare agent was used to assassinate the half-brother of Kim Jong-un.

U.K. Treasury chief Philip Hammond is insisting that Britain can overcome EU opposition and include financial services in a post-Brexit trade deal a day after his French counterpart ruled it out. The disagreement underscores what is set to be a major sticking point and comes as the EU publishes its draft guidelines today for their future economic partnership.

Kicking off a tour in the West, Saudi Arabia's crown prince will land in the U.K. today, hoping to persuade British officials that his "shock" reforms have made his country a better place to invest. He's also scheduled to meet with President Trump on March 19. London and New York have long been the frontrunners to host the partial upcoming flotation of Saudi Aramco (Private:ARMCO), although Hong Kong is emerging as an increasingly likely compromise.

The Commodity Futures Trading Commission can legally classify and regulate cryptocurrencies as commodities, according to a new ruling from a federal judge that allowed a CFTC lawsuit against company Coin Drop Markets. Crypto legislation is still in its early stages in the U.S. and the federal government has held off from making any major rulings on regulation.

Royal Bank of Scotland has reached a $500M settlement with New York state to resolve charges it misled investors by selling risky mortgage securities that contributed to the 2008 financial crisis. Setting aside £3.2B to cover potential settlements with the DOJ and other regulators, RBS is the sixth bank to resolve similar claims by New York, resulting in roughly $3.7B of settlements.

Under pressure from BlackRock (NYSE:BLK) to address its potential exposure to litigation from mass shootings, American Outdoor Brands (NASDAQ:AOBC) said it supports gun-safety measures like tighter background checks, but would be wary of adding "smart-gun" technology to its weapons. "We are a manufacturing company, not a technology company," wrote the owner of Smith & Wesson.

Off again. That's the word as a supposedly done deal for the troubled Weinstein Company has fallen apart for a second time. Reports suggested that the buyer group led by Maria Contreras-Sweet discovered that Weinstein's debt was $280M rather than a previously disclosed $225M. The deal was also overshadowed by allegations that the board had enabled abuses by co-founder Harvey Weinstein.

Airlines have already begun canceling flights ahead of the latest nor'easter to hit the Northeast. More than 1,600 have been preemptively grounded for today and another 180 for tomorrow, according to flight-tracking service FlightAware. Combined, about 500 of those came on JetBlue (NASDAQ:JBLU), which operates its busiest bases at New York JFK and Boston.

Uber's fleet of self-driving trucks can now deliver shipments in Arizona. Called a transfer hub model, the semis are responsible for highway driving, but let human drivers take over for the final miles of the trip. UBER said the program will create more short-term jobs since the trucks aren't anywhere near advanced enough to dock alone yet.

Tech lawsuits: BlackBerry (NYSE:BB) is turning its patent-infringement sights on Facebook (NASDAQ:FB), arguing that WhatsApp and Instagram copied technology and features from BlackBerry Messenger. According to the WSJ, Qualcomm (NASDAQ:QCOM) is also in talks to settle a dispute with Huawei, which has been withholding a hefty stream of royalty payments from the chipmaker.

Coca-Cola is on the brink of a new chapter. The company plans to launch its first alcoholic drink in Japan's growing market for "Chu-Hi" alcopops, which contain shochu alcohol mixed with flavored carbonated water. "It's an example of how we continue to explore opportunities outside our core areas," said Coca-Cola's (NYSE:KO) Japan President Jorge Gardunu.

Weight Watchers slipped 4.3% on Tuesday, and the stock added to losses in AH trading, after Oprah Winfrey sold a portion of her holdings. "I am deeply committed to Weight Watchers (NYSE:WTW) and continue to see a bright future for the company," said Winfrey, who is continuing in her role as board member, adviser and spokesperson. Shares have gained more than 8x in value since she bought into the business in 2015.

U.S. prosecutors are recommending Martin Shkreli spend at least 15 years in prison, saying his lack of remorse and respect for the law justifies a long time behind bars. The "Pharma Bro" has been convicted of lying to investors about the performance of his hedge funds MSMB Capital and MSMB Healthcare, and conspiring to manipulate the stock price of Retrophin (NASDAQ:RTRX).