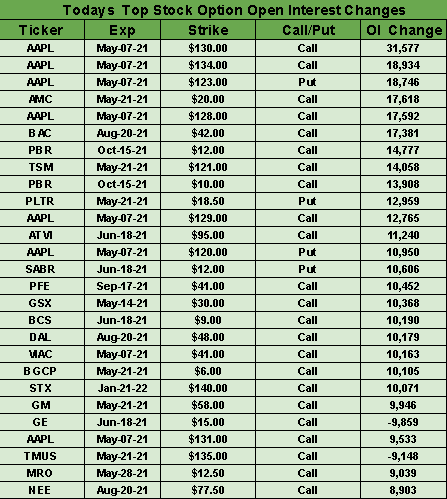 Another crypto craze is taking the market by the storm as a parabolic rally for altcoins (cryptos other than bitcoin) took the value of all digital tokens past $2.3T. Dogecoin (DOGE-USD), a crypto that started as a joke, is now changing hands at 68 cents, up about 63% in the past 24 hours, 131% over the past week, and over 11,000% so far in 2021. Dash (DASH-USD) also spiked 35% over the last 24 hours and Ethereum Classic (ETC-USD) rose almost 50%, helping crash crypto trading on Robinhood's popular trading app, while Force DAO and Tierion (TNT-USD) surged more than 1,000%.

What's happening? Some are pointing to Elon Musk’s upcoming SNL appearance as the "Dogefather," as well as the future of DeFi and other crypto trends, but one of the more immediate catalysts appears to be a change in trading sentiment. Once upon a time, investors had talked about the time value of money and the advantages of compounding, but who's looking for 10% a year, when one could make 50% or more per day? That kind of attitude, while risky, has been increasingly adopted by a new generation of traders, while institutions can take advantage of the price moves by easily entering and exiting positions.

The fact that "HODLing" is even a term in the cryptosphere, where investors buy and hold their positions regardless of price, has put a certain support under the industry that possibly cannot be rivaled in any other asset class. Throngs of new traders are also piling into the crypto arena, even with small positions, due to FOMO or "just in case" digital assets do eventually go mainstream. Enthusiasm is meanwhile building across social media, where the Winklevoss twins said the Gemini crypto exchange would now support Doge. "Yes, it's a meme coin, but all money is a meme!" Cameron wrote on Twitter.

Outlook: While some see this as a mere opportunity to get in on the action, bigger believers say the current rally is a breakthrough moment that will provide cover against a future dollar devaluation. Others see the entire system as a kind of pyramid scheme, but even among the biggest backers of crypto, some see the current altcoin rally as unsustainable. Famed investor Mike Novogratz said recently he'd be "very, very worried" were one of his friends to invest in Doge, but thinks crypto returns "will beat the crap out of stocks, but not forever." "They will hit an equilibrium, there's no free lunch in the world," he added. "Right now, it feels like there's a free lunch because the government's losing everything."

"It may be that interest rates will have to rise somewhat to make sure our economy doesn't overheat," Treasury Secretary Janet Yellen said on Tuesday, triggering a selloff in the tech sector which depends on low rates for its growth and expansion. The Nasdaq closed 2% lower on the news, before a correction was issued by the press office. "Let me be clear, it's not something I'm predicting or recommending," Yellen later explained at a WSJ event.

Following the less-than-earth-shattering comments, many were quick to highlight the clarification, while others pointed out that the real decision-making lies with Jerome Powell and Co. The Fed Chair has previously insisted that he's "not even thinking about thinking about higher rates" until the labor market recovers from last year's economic downturn. "Think of the comments coming from Yellen the Economist rather than containing any policy guidance," added Mohamed El-Erian, chief economic adviser at Allianz. Sentiment today has shifted in favor of that outlook, with Nasdaq futures up 0.6%, following by a 0.4% gain for the S&P 500 and 0.3% advance for the DJIA.

Thought bubble: What's wrong with an overheated economy? The bustling economic activity and increase in consumer wealth generally lead to high levels of inflation, asset bubbles and external economic shocks. The sharp rise in costs could also result in inefficient allocations as suppliers overproduce and create excess production capacity. When things slow down, a recession can hit, and central banks may attempt to raise interest rates before then to lower the amount of spending and borrowing in the economy.

More raw material... Yellen's remarks came as commodity prices, a leading indicator of inflation, continue to rip higher. WTI crude oil prices are up more than 17% over the past quarter and have soared nearly 12% in the last month. Some commodities like copper and corn have even jumped to their highest levels in almost a decade as major economies rebound from the pandemic. Is this the start of a supercycle given recent inflation trends, or will commodity prices retreat as shortages and logjams are smoothed out along the supply chain?

End of an era for open outcry

Cue the scenes from Trading Places... CME Group (NASDAQ:CME) is permanently closing most of its open-outcry pits in Chicago, including trading of agricultural commodities like soybeans, wheat, cattle and hogs, as well as the trading of options on the S&P 500. In fact, the only part of CME's trading floor that will remain open is its Eurodollar options pit (the interest-rate contracts still represent one of the exchange's largest marketplaces). While many of the CME's pits were already replaced by electronic trading, the remaining ones were temporarily closed in March 2020 to prevent the spread of COVID-19.

Quote: "I guess I am not surprised," explained Dan Huber, an independent broker who spent 31 years on the trading floor. "Sad to see it end this way but we will all turn the page and move on. It was a good run."

Some history: Options pits and floor trading for agricultural commodities stretch back 173 years in Chicago. They've long been part of the heritage of CME Group, which took its name from the Chicago Mercantile Exchange, now one of the company's subsidiaries. With many exchanges adopting automated systems in the 1980s, floor trading was gradually replaced with telephone trading, and by the 1990s, those systems began to be replaced with computerized networks and electronic platforms. Most floor traders were replaced by the 2000s, and by 2015, open outcry had fallen to just 1% of CME's total volumes.

If you still want to get a look at open outcry showmanship, there are some venues still available. Those include the New York Stock Exchange's (NYSE:ICE) trading floor in Manhattan, and several options floors at Cboe Global Markets (NYSE:CBOE) - CME's rival in Chicago. Across the pond, the London Metal Exchange is considering permanently closing its red sofa trading ring, which is the last open outcry floor left in Europe.

SpaceX (SPACE) has so far received more than 500,000 orders for its satellite internet service, which is designed to beam high-speed internet to consumers anywhere on the planet. The news came during the webcast of its 26th Starlink mission, which launched another 60 Starlink (STRLK) satellites into orbit. "Only limitation is high density of users in urban areas. Most likely, all of the initial 500k will receive service," Elon Musk wrote on Twitter. "More of a challenge when we get into the several million user range."

Backdrop: Starting in October, SpaceX began a public beta program for Starlink, with service priced at $99 a month. That's in addition to a $499 upfront cost to order the Starlink Kit, which includes a user terminal and Wi-Fi router to connect to the satellites. While the company formally began accepting $99 preorders for Starlink in early February, SpaceX emphasized that the preorders are "fully refundable" since "placing a deposit does not guarantee service." At the time, the company also disclosed that Starlink had "over 10,000 users in the United States and abroad."

Race for global internet coverage: Facebook (FB) abandoned plans for Aquila in 2018, which aimed to deliver service via solar-powered drones, while Alphabet (GOOG, GOOGL) pulled the pin on Project Loon in January, a decade-old venture that planned to beam internet to Earth via giant balloons. The backdrop is prompting companies to increasingly look to space to blanket the globe in connectivity, allowing them to reach the other half of the world's population that doesn't have Internet. Those projects face steeper initial costs and take longer to deploy, but they might provide more consistency with longer lifetimes.

While Amazon's (NASDAQ:AMZN) Project Kuiper and Facebook's Athena are still mostly on paper, SpaceX has now launched more than 1,500 internet satellites of its planned Starlink fleet into low earth orbit. "Once we can predict cash flow reasonably well, Starlink will IPO," Elon Musk wrote in a tweet on Feb. 9. He has also suggested that retail investors will get "top priority" in the coming offering.

"Flippening" chatter is gaining steam in the crypto world.

JPMorgan's (NYSE:JPM) Dimon is fed up with Zoom calls and remote work.

Full approval for Pfizer's (NYSE:PFE) vaccine could come by end of May.

Facebook (NASDAQ:FB) oversight board to announce decision on Trump ban.

Equinox in talks to go public via a Social Capital SPAC (NYSE:IPOF).