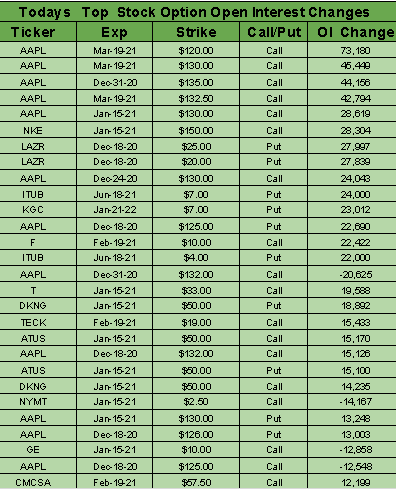 Investors this afternoon will tune into the Fed's latest quarterly projections on economic growth, unemployment, inflation and interest rates, which will be the first since the pandemic intensified, only to be followed by historic vaccine progress. While no changes are expected on rates (they're already near zero), the central bank's asset purchase program could see certain adjustments. Some expect the Fed to increase the current pace of $120B bonds per month or buy longer-dated bonds to stimulate the economy, though others see it providing "outcomes-based" guidelines that are needed before tightening monetary policy. At Jerome Powell's press conference there could also be some talk about how monetary policy can address inequality and the climate, as well as some focus on the timing of the inflation overshoot.

Shares of Tilray (NASDAQ:TLRY) and rival Aphria (NASDAQ:APHA) are surging in premarket trade, up nearly 20% and 12%, respectively, after Bloomberg Canada reported that the pot firms are in advanced talks to merge. The combined company is expected to keep the Tilray name, but with Aphria CEO Irwin Simon as CEO, and Aphria holding a bigger stake and most of the board seats. It's also seen moving its HQ to the U.S. as it focuses on winning market share in that country. Note: BNN Bloomberg also reported over the summer that Aphria was in talks to merge with Aurora Cannabis (NYSE:ACB), but that deal never came to fruition. (75 comments)

ContextLogic (WISH), the parent company of e-commerce platform Wish, is expected to begin trading on the Nasdaq this morning following the blockbuster IPOs of Airbnb (NASDAQ:ABNB) and DoorDash (NYSE:DASH) last week. Shares were priced at $24 each, at the top end of the marketed range, raising $1.1B and giving the company an initial valuation of $17B. The offering is the 31st on a U.S. exchange this year to exceed $1B, according to data compiled by Bloomberg. More records... With Wish, more than $20B has now been raised in public listings in December, while the 2020 IPO total has reached more than $174B.

Signs of progress toward a coronavirus stimulus package lifted sentiment on Tuesday, allowing the S&P 500 to shake off a four-day losing streak, while futures suggested the rally could continue after advancing another 0.3% overnight. Top congressional leaders indicated they were inching closer to striking a deal after a day of meetings, while vaccine optimism and a dovish stance at today's Fed meeting are expected to propel markets further. "It is just another excuse for those that missed the rally, or that are bullish anyway to buy into it," said Luca Paolini, chief strategist at Pictet Asset Management. U.S. retail sales data will also be published this morning, which could show a rise for the seventh consecutive month in November, as well as purchasing managers surveys that are likely to display a continued expansion in the U.S.
Go Deeper: Buffett calls for more fiscal stimulus to fight 'economic war.'

The time frame in which most Americans will be eligible for a coronavirus vaccine keeps moving up. Just two weeks ago, Dr. Moncef Slaoui, head of Operation Warp Speed, said the U.S. could immunize one-third of its population within three months, but it now looks like most of America could get a vaccine by that date. "Depending on the decisions by our governors... but I believe we'll have enough supply out there to be reaching out to the general public for administration - at your CVS (NYSE:CVS), Walgreens (NASDAQ:WBA), Krogers (NYSE:KR) - by the end of February into March," said Health and Human Services Secretary Alex Azar. That timeline could be even earlier if the approval of the AstraZeneca (NASDAQ:AZN) and Johnson & Johnson (NYSE:JNJ) vaccine comes soon, he added. On Tuesday, the FDA said that a jab developed by Moderna (NASDAQ:MRNA) was "highly effective," setting the stage for an emergency authorization later this week, while (NYSE:PFE) and BioNTech (NASDAQ:BNTX) began shipping their vaccine nationwide on Sunday. (32 comments)

Facebook (NASDAQ:FB) is lifting its temporary post-election ban on political ads - that was implemented to "prevent confusion or abuse" - as Georgia gears up for a Jan. 5 runoff election that will determine which party takes control of the Senate. "We agree that our ad tools are an important way for people to get information about these elections," Facebook wrote in a blog post. "We will reject ads that target locations outside of Georgia or that are not about the elections for violating our Advertising Policies. And, we will continue to prohibit any ad that includes content debunked by third-party fact-checkers or delegitimizes the Georgia runoff elections." As of now, Republicans will hold a 50-48 majority in the Senate, but if Democrats win both of the Georgia runoff races, Vice President-elect Kamala Harris would be the tie-breaking vote, giving the party control of the White House and Congress. Last week, Google (GOOG, GOOGL) also lifted its own temporary pause on elections-related advertising after a blackout of more than a month due to concerns over election misinformation. (13 comments)
Go Deeper: Facebook to let fans pay celebrities for face time.

In some good news for lenders like Deutsche Bank (NYSE:DB), Banco Santander (NYSE:SAN) and ING (NYSE:ING), the European Central Bank has lifted a de facto ban on bank dividends, which had been frozen in an effort to preserve cash for lending during the pandemic. Strict limits will still be in place on payouts in order to ensure lenders maintain financial strength. Dividends and share buybacks must "remain 15% of cumulated profit for 2019-20 and not higher than 20 basis points of the Common Equity Tier 1 ratio, whichever is lower," the central bank announced. The Fed has also barred the biggest U.S. banks from stock buybacks and capped dividends at second-quarter levels through the rest of 2020.

Last quarter, Apple's (NASDAQ:AAPL) iPhone sales missed estimates due to the pandemic-related iPhone 12 delay, but things are looking much different this time around. Reports suggest the company will produce 95M to 96M iPhones for H1 2021, which is up nearly 30% on the year due to strong 5G demand. Wedbush's Daniel Ives notes that the target is "well ahead of Street expectations" and "another bullish sign of iPhone 12 demand," as the stock climbed 5% on Tuesday, with more gains likely at the open. There are also plans to ramp up to 230M iPhones next year, up 20% Y/Y, though an industry-wide component shortage could put pressure on Apple's goals.

Solar tax credit extension may be linked to coronavirus aid.