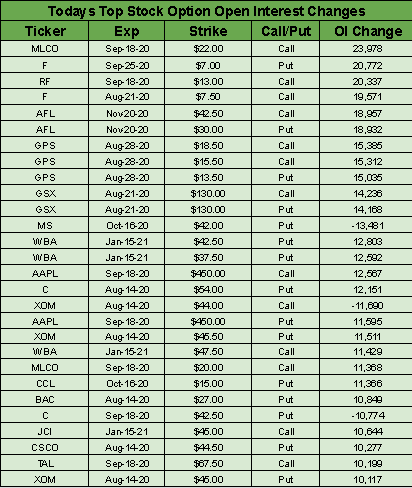 As the White House and Democratic leaders struggle to restart coronavirus relief negotiations, Senator Kamala Harris of California was announced as Joe Biden's running mate for the 2020 presidential election. The two will appear together today in Wilmington, Del., to deliver joint remarks. On the economic side of things, Harris is for a $15/hour minimum wage, advocated for closer regulatory scrutiny of Big Tech and has proposed taxing Wall Street trades and derivative transactions to pay for her Medicare for All healthcare plan. She has also promoted a tax credit for the middle-class (and rent relief), supports the Green New Deal, but has opposed the Trans-Pacific Partnership and NAFTA.

Inflation reading expected to be tame

Traders will examine the latest consumer price report before the opening bell. The CPI is forecast to have increased 0.3% in July, half the monthly increase seen in June, while the core CPI is expected to rise by 0.2%, or 1.2% on an annualized basis. U.S. stock index futures rebounded 1% overnight after the S&P 500 closed down 0.8% on Tuesday - snapping a seven-day winning streak - as the tech sector weighed on the benchmark. On the earnings front, Cisco (NASDAQ:CSCO), Lyft (NASDAQ:LYFT) and SmileDirectClub (NASDAQ:SDC) will all report after the closing bell.

The U.K. economy shrank 20.4% in the second quarter, equivalent to an annualized rate of 59.8%, notching the worst economic hit from coronavirus in Europe as well as reporting the highest death toll. Over the same period, the U.S. and Germany lost around 10% of their output, with Italy losing 12%, France 14% and Spain 19%. The outsize hit reflects the timing and duration of the U.K.'s nationwide lockdown, though there were signs of a recovery in June as GDP grew by 8.7% from May. Officials warn it could take until the end of 2021 to fully recover.

Allegations that Russia's coronavirus vaccine is unsafe are groundless and driven by competition, Russian Health Minister Mikhail Murashko told the Interfax news agency. Yesterday's announcement is being viewed by some as a propaganda coup for the Kremlin, and the name of the vaccine, Sputnik V, references the world's first satellite that was launched by Russia during the Cold War. Experts and public health officials have also voiced concerns, given the lack of data and Phase 3 trials, which test a vaccine's safety and efficacy on a larger number of people across multiple locations.
Go deeper: Moderna reaches $1.5B vaccine supply deal with the U.S.

In what felt like "a mini-crash," gold plunged 4.6% on Tuesday to settle at $1,946.30/oz. for its steepest one-day dollar decline since April 15, 2013, and biggest percentage slide since March 13. Other precious metals also took a beating, with silver down 11% - giving up all its gains since the start of August - as well as losses for platinum and palladium. "The precious metals complex was driven by a drop in rates, a steady increase in inflation expectations and a falling U.S. dollar," according to Bart Melek, head of commodity strategies at TD Securities. "The rally is now giving up some of these gains as these drivers lose momentum."
Go deeper: CME raises margins on gold and silver futures.

After shares tripled in value this year - and rose nearly sixfold over the past 12 months - Tesla (NASDAQ:TSLA) has approved a five-for-one split to make stock ownership more accessible to employees and investors. Each stakeholder of record on August 21 will receive a dividend of four additional shares that will begin trading on a stock split-adjusted basis on August 31. The decision follows a similar move by Apple (NASDAQ:AAPL), which announced a 4-for-1 split last month, as well as criticism from Elon Musk that Tesla's stock price was too high. TSLA +4.5% premarket.

The home-sharing giant will confidentially file IPO paperwork with the SEC later this month for a listing that could still happen this year, WSJ reports. Airbnb (AIRB) was recently valued at $18B during an April fundraising round (down from the prior $31B), as the coronavirus pandemic drove bookings toward zero, though those have rebounded to March levels as of July 8. The IPO market has been a hot one, with more than $60B raised so far in 2020 - putting this year on track to be the highest since the tech boom in 2000.

What's in the TikTok ban?

"Prohibited transactions may include, for example, agreements to make the TikTok app available on app stores... purchasing advertising on TikTok, and accepting terms of service to download the TikTok app onto a user device," according to a White House document seen by Reuters. Barring legal challenges, a deal for TikTok (BDNCE) seems like the only way out of the current predicament. The chances of a Microsoft (NASDAQ:MSFT) purchase stand at 20%, according to the SCMP, while the odds of a Twitter (NYSE:TWTR) deal are said to be even smaller.
Go deeper: Gaming surge drives Tencent growth despite similar crackdown on WeChat.

Other conferences were expected to quickly fall in line with the Big Ten and Pac-12, each of which elected to put off fall sports due to ongoing challenges from the COVID-19 pandemic. But as of Tuesday night the Atlantic Coast Conference suggests it's business as usual, in addition to the Southeastern Conference, Big 12 and American Athletic Conference. The quick developments for the fall season have been closely watched by broadcasters like ABC (NYSE:DIS), NBC (NASDAQ:CMCSA), CBS (NASDAQ:VIAC) and Fox (NASDAQ:FOX), as well as betting firms including DraftKings (NASDAQ:DKNG) and Penn National Gaming (NASDAQ:PENN).