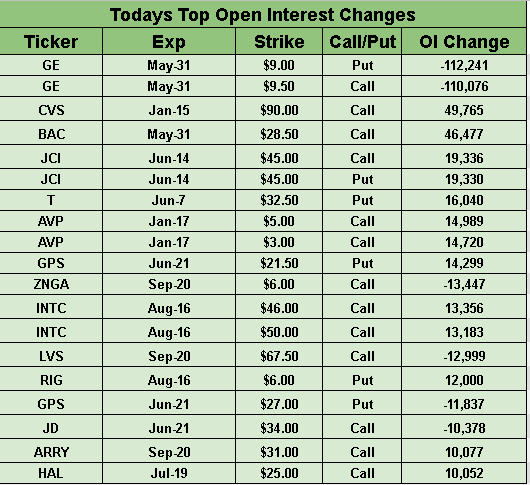 China is ready to use rare earths to strike back in the U.S. trade war, the ruling Communist Party's People's Daily warned overnight, saying in a strongly worded commentary "don't say we didn't warn you." Rare earths are a group of 17 chemical elements used in everything from high-tech consumer electronics to military equipment. U.S. stock index futures slipped further on the news, with the DJIA pointing to a 193-point loss, while the Shanghai Composite rose as much as 0.9% during the session, boosted by shares of rare earth miners in Asia Pacific.

With risk aversion increasing globally in recent days, bonds are rallying. At the beginning of May, the yield on the 10-year Treasury was about 2.55%, but it's now hovering around the 2.22% level, marking an over 30 bps move downward this month alone. Some analysts have also increased bets that the Fed will cut U.S. interest rates not once but twice this year, countering concerns about slowing global growth that have been inflamed by the worsening U.S.-China trade war.

The Trump administration has again decided not to label China a currency manipulator, passing up the fifth opportunity to do so in its semi-annual currency report. The U.S., however, is keeping the nation on a list of countries whose trade surpluses and other indicators are closely tracked. Under a 1988 law, the Treasury Department is required to report to Congress every six months on whether any countries are manipulating their currencies to gain trade advantages.

Huawei looks to speed up lawsuit

Huawei Technologies has filed a "motion for summary judgment" in its lawsuit against the U.S. government, marking the telecom equipment maker's latest bid to fight sanctions from Washington. The motion asks to scrap a section of the 2019 National Defense Authorization Act, which places a broad ban on federal agencies and their contractors from using Huawei equipment on national security grounds. China on Tuesday also lashed out at the U.S. over its blacklisting of Huawei during a tense meeting at the World Trade Organization.

It's the first studio with current productions in Georgia to take a public position on the state's new abortion law. Netflix (NASDAQ:NFLX), which shoots major series Stranger Things and Ozark in Jackson and Lake Allatoona and Lanier, said it would work to oppose the abortion restrictions, but would continue to film in the state for now. "Should the law take effect in 2020 as scheduled, we'd rethink our entire investment in Georgia," Ted Sarandos, the company’s chief content officer, said in a statement.

Qualcomm (NASDAQ:QCOM) has asked Federal Judge Lucy Koh not to enforce her decision that it illegally squeezed out rivals in the smartphone chip market as it plans to file an appeal that could take more than a year to wind through the courts. The ruling would force it to rework its license deals by "radically restructuring" its business in a way that would be impossible to unwind if it wins on appeal. Qualcomm argues that Koh excluded evidence after a March 2018 cutoff date - including the fact that Apple (NASDAQ:AAPL) dropped Qualcomm in favor of Intel (NASDAQ:INTC) - and said that the FTC's theory in the lawsuit was unprecedented in antitrust law.

A group of potential buyers are preparing bids for prepaid wireless brand Boost Mobile in an upcoming sale valuing the offshoot of T-Mobile (NASDAQ:TMUS) and Sprint (NYSE:S) at up to $3B, Reuters reports. The tie-up of the two carriers won approval from the FCC last week after they offered concessions to reduce the combined company's market share in the prepaid business. While the deal awaits a ruling from the DOJ, interested parties are already preparing bids.

Russia is considering a possible extension of its oil output reduction agreement with OPEC and other producers, according to First Deputy Prime Minister Anton Siluanov. "There are many economic issues and strategic issues (related to this)," he said on the sidelines of a conference in Kazakhstan. OPEC, Russia and other producers agreed to cut output by 1.2M bpd from January for six months to boost oil prices. The group is next set to discuss extending the pact in Vienna on June 25-26.

A lot at stake for Nissan

The Renault-Nissan-Mitsubishi Alliance has already been in turmoil since November's surprise arrest of Carlos Ghosn, the former chairman of all three companies, bringing long-simmering tensions to a boil. Now, the proposed merger between Renault (OTCPK:RNLSY) and Fiat (NYSE:FCAU) poses new risks for Nissan (OTCPK:NSANY): the Japanese automaker could lose influence in its two-decade partnership or get dropped altogether. On the upside, Nissan would be part of a broader alliance with the possible benefit of cheaper parts, as well as a deeper pool of technology and research.

Already more than 7,150 store closures this year have been announced by U.S. retailers including Dressbarn, CVS, Party City (NYSE:PRTY) and Pier 1 Imports (NYSE:PIR), according to Coresight Research. While 2,726 store opening announcements have been made, the net figure is still close to the 5,524 store closures of 2018 - and it's not even June. With the threat of additional tariffs taking effect on consumer-facing goods imported from China, things could get even worse, according to UBS's Jay Sole. "We think potential 25% tariffs on Chinese imports could accelerate pressure on these [companies'] profit margins to the point where major store closures become a real possibility." Mall-related shares: SPG, MAC, TCO, CBL, PEI, WPG, KIM

Contributor Chris Ciovacco discusses what history has told us about the current correction.

Boeing (NYSE:BA) 737 MAX may not return to service until August - IATA