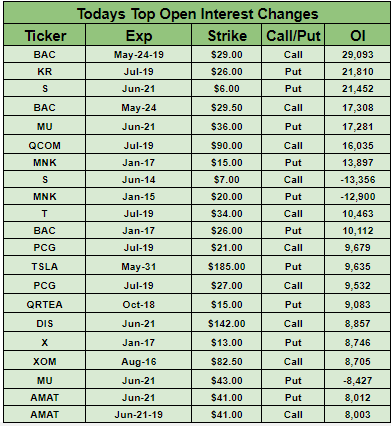 It's likely the final throw of the dice for a prime minister who has run out of options. Theresa May's proposal to give MPs a vote on whether to hold a second Brexit referendum if they approve her withdrawal agreement appears to have fallen flat on its face, as well as new guarantees for the Irish backstop and a "compromise" over a temporary customs union. The calls for her resignation are now getting louder, with sterling off another 0.3% to fresh lows of $1.2663 amid renewed risks of U.K. turmoil and uncertainty. May's Tory party is also bracing for defeat in tomorrow's European elections - a poll the U.K. wasn't meant to take part in, but has been forced to due to a delayed Brexit.

Trade anxiety is setting in again as the U.S. considers cutting off the flow of vital American technology to as many as five Chinese companies - including Hikvision - widening the dragnet beyond Huawei to include world leaders in video surveillance. DJIA futures are down 64 points on the news and shares in Shanghai closed 0.5% lower. Meanwhile, China's Xi Jinping called for a new "Long March," while ambassador Cui Tiankai commented on trade talks, saying the U.S. "changes its mind so often."

Minutes from the Fed's last meeting will be released this afternoon, but with four members of the board due to speak today, the broad strokes will likely already be known. Investors are eyeing how much consensus there was at the FOMC on Chair Jerome Powell's statement that there was no strong will to move rates in either direction. Eric Rosengren said yesterday that the downside risks to the U.S. economy are enough to convince him of the patience required on policy, while James Bullard announced overnight that the rate hike back in December may have "slightly overdone it."

U.S. District Judge Lucy Koh has sided with the FTC in an antitrust case, saying Qualcomm (NASDAQ:QCOM) "strangled competition" by charging unreasonably high royalties for its patents. She ordered Qualcomm to renegotiate licensing agreements with customers free of unfair tactics - such as threatening to cut off access to its chips - and said it can't sign exclusive supply agreements with smartphone makers like Apple (NASDAQ:AAPL), which last month settled a lawsuit and agreed to continue paying licensing fees. The decision could challenge the company's business model and will require Qualcomm to submit to monitoring for the next seven years. QCOM -12%premarket.

Target (NYSE:TGT) is set to report first-quarter earnings before the bell, hoping to follow those of rival Walmart (NYSE:WMT), which yesterday showed pressure on margins easing thanks to greater sales of its in-house apparel and home brands, as well as private-label food options. Morgan Stanley earlier this month upgraded shares of Target, believing it was beyond “peak margin pain" and calling it a "survivor" in retail. The company also generated buzz this month around the launch of its limited-edition line with preppy apparel and accessories brand Vineyard Vines.

Saudi Arabia has agreed to purchase U.S. liquefied natural gas from Sempra Energy (NYSE:SRE), marking a new strategic direction for the kingdom as it seeks to establish a footprint in the growing global market for the fuel, WSJreports. The transaction demonstrates how the U.S. energy boom is dramatically changing global trade. Historically, Saudi Arabia has been a major supplier of oil to the U.S., but due to the shale revolution, the Energy Department predicts America will become a net energy exporter in 2020.

Turkey has a little more than two weeks to decide whether to complete a multibillion-dollar deal for Russian S-400s as the U.S. offers to sell Ankara Raytheon's (NYSE:RTN) Patriot missile defense system, CNBC reports. At risk: If it goes through with the S-400 deal, Turkey faces removal from Lockheed Martin's (NYSE:LMT) F-35 program, forfeiture of 100 promised F-35 jets, imposition of U.S. sanctions and potential blowback from NATO. Turkey's lira has been sliding in part on concerns over the U.S. penalties, which would hit an economy already in recession after a currency crisis last year.

The calls for 737 MAX compensation are growing as China's three biggest airlines - Air China (OTCPK:AIRYY), China Southern (NYSE:ZNH) and China Eastern (NYSE:CEA) - requested payments from Boeing (NYSE:BA) for losses incurred by the grounding and delayed deliveries of 737 MAX. China was the first country to ground the jets globally after a crash in Ethiopia killed 157 people in March, in the second such incident for Boeing's newest aircraft. The compensation requests come as the FAA hosts global regulators in Dallas tomorrow to determine when the grounded 737 Max aircraft will return to the air.

Headless robot in a driverless car

Ford (NYSE:F) is working on a way to resolve what self-driving researchers refer to as "the last 50-foot problem," with a delivery robot called Digit, an android with two stork-like legs and arms capable of carrying a 40-pound load. The automaker would like to deploy Digit delivery robots as early as 2021, alongside the planned introduction of its autonomous vehicle fleets to ferry people and packages around the clock. "We're going to have an AV fleet out there, and my goal is to get robots to be able to be there and ready at the same time," said Craig Stephens, director of controls and automation in Ford's research and advanced engineering.

Negative sentiment might be ahead for AT&T (NYSE:T), writes contributor BOOX Research, with 'Game Of Thrones' viewers at risk.