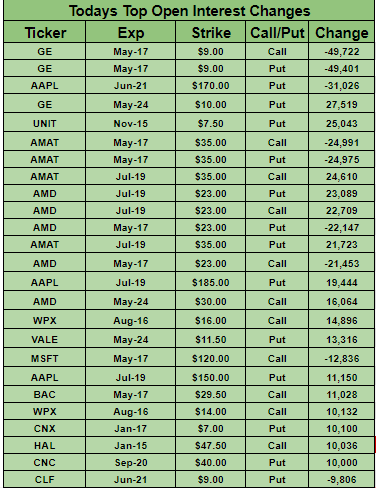 Mark your calendar. The next stage of Brexit drama is set for the beginning of June, when Theresa May finally brings her divorce deal back to Parliament. No sign of an agreement has yet been seen with the Labour opposition following seven weeks of talks that have infuriated her own party. If the bill is defeated for a fourth time, she can't bring it back again without ending this parliamentary session, meaning its defeat would almost certainly result in a new prime minister.

What's next for U.S. markets?

Dow futures are down 100 points after recording earlier gains following the release of weaker-than-expected economic data from China. Retail sales, industrial output and fixed asset investment for the month of April all fell short of analysts' forecasts, suggesting a weakening bargaining position, but it may up the ante in Beijing's trade standoff with Washington. A big economic data release is also on deck in the U.S. this morning, with retail sales and manufacturing numbers, as well as figures on industrial production and business inventories.

The surplus of supply over demand that the oil market saw in the first quarter could "flip" into a deficit in the second, according to the IEA's latest monthly report. "Considerable uncertainty" about global supplies looms - from Iran and Venezuela to Libya, as well as contaminated Russian crude flows to Europe and attacks on shipping vessels. Last year's oil demand growth estimate was revised downward by 70K barrels per day to 1.2M bpd, while the forecast for this year was cut by 90K.

Europe has 60 days to ease Iranian oil sales or else see the end of the 2015 nuclear deal, Iran's ambassador to the U.K., Hamid Baeidinejad, warned yesterday, although the Islamic Republic now appears to be scrapping the waiting period. Iran is officially ending one of its key commitments to the JCPOA, local media announced today, citing senior officials at the country's Atomic Energy Agency. The news comes as tensions rise with the U.S. amid whether Tehran was involved in the sabotage of two Saudi oil tankers in the Oman Gulf.

The latest Elon Musk plan to shake up an entire industry gets off the ground tonight when a SpaceX (SPACE) Falcon 9 launches the first batch of 60 satellites for the company's Starlink broadband network. They'll be part of a constellation designed to beam internet access across the entire globe. SpaceX eventually plans to build a mega constellation of nearly 12,000 satellites, but will need six more launches of 60 satellites to even begin offering "minor" coverage.

Lots of talk about cars

President Trump has until a Friday midnight deadline to decide whether to impose tariffs on European car manufacturers, with some analysts predicting Germany's auto sector could fall as much as 12% over "three bad trading days" if he goes through with the levies. There's also some EV buzz... Volvo Cars (OTCPK:GELYY) has signed "multi-billion dollar" supply deals with Asian battery firms as the company "firmly commits to moving beyond the internal combustion engine," while U.S. lawmakers move closer to developing a national electric vehicle supply chain policy.

It's the next high-profile computer-security issue to emerge this week. Microsoft (NASDAQ:MSFT) has taken the unusual step of cautioning that a monster bug it has now patched is "highly likely" to be exploited by malicious software, similar to the WannaCry worm, which spread across the globe two years ago. The flaw mainly affects older systems like Windows 7 and Windows Server 2008. It also affects Windows 2003 and Windows XP.

Paving the way for a ban on doing business with China's Huawei, President Trump is expected to sign an executive order this week barring American companies from using telecom equipment made by firms posing a national security risk, Reuters reports. The order would invoke the International Emergency Economic Powers Act and comes at a delicate time in relations between Beijing and Washington, with the two ratcheting up tariffs over what U.S. officials call China's unfair trade practices. Related: NOK, ERIC

Morgan Stanley nabbed the biggest U.S. IPO of the past five years, but following a major price decline, questions are now flying across Wall Street about how the bank priced Uber (NYSE:UBER) shares. Underwriters worried about the IPO deployed an unusual "naked short" tactic to support the stock, allowing the sale of shares in excess of the greenshoe portion, but then bought them back in the open market to provide even more firepower. A memo from the U.S. labor relations board yesterday also said Uber drivers are contractors, not employees.

Hoya Capital Real Estate discusses if self-storage REITs are too good to be true.

EU split over how to deal with Italy.