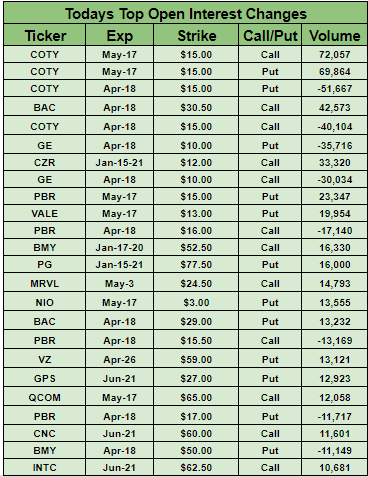 Futures point to stocks opening on the upside, as investors await another crop of first-quarter earnings including Pepsi (NASDAQ:PEP), Abbott Laboratories (NYSE:ABT), and Morgan Stanley (NYSE:MS). S&P and Nasdaq futures rise 0.2% each, while Dow futures edge up 0.1%. The Stoxx Europe 600 Index slips 0.2% with miners dropping along with iron ore prices. Hong Kong’s Hang Seng Index ended its session essentially flat, while Shanghai rose after China’s GDP increased 6.4% in the first three months of the year.

The U.S. and Turkey have failed to break their impasse over Turkey's plan to deploy a Russian air defense system the Pentagon says could jeopardize U.S. fighter aircraft including Lockheed Martin's (NYSE:LMT) F-35, which Turkish manufacturers helped build. Turkish officials repeated that the deal with Russia has been signed and is final, while the U.S. has threatened to impose sanctions under legislation that allows the punishment of entities doing business with Russia, and to expel Turkey from the F-35 program. The first batch of Russian S-400 missiles may be delivered as early as June, leaving little time for the dispute to be resolved.

Qualcomm (NASDAQ:QCOM) jumped 6.8% in after-hours trading after it and Apple (NASDAQ:AAPL) agreed to dismiss all litigation worldwide in a settlement that involves Apple paying QCOM. The companies also reached a six-year license agreement, effective April 1, with two one-year option periods plus a multiyear chipset supply agreement. In a regulatory filing Qualcomm says it expects incremental EPS of about $2 as product shipments ramp up.

China churned out a record 231M tons of steel in Q1 spurred by consumption in the infrastructure sector due to government stimulus. The Q1 figure is up almost 10% from a year earlier, with production in March rising 10% to 80.3M tons.

T-Mobile CEO pushes back on report that DOJ opposes merger

T-Mobile US (NASDAQ:TMUS) CEO John Legere says the Wall Street Journalreport that its merger deal with Sprint (NYSE:S) likely won’t be approved by the U.S. Department of Justice is "simply untrue." In a meeting earlier this month, Justice Department staff members laid out their concerns with the deal and questioned the companies' arguments that the merger would produce important efficiencies, according to the WSJ report. T-Mobile US fell 4.2% in after-hours trading, while Sprint sank 8%.

Netflix Q2 streaming guidance on the light side

Netflix (NASDAQ:NFLX) Q1 EPS of 76 cents beat consensus by 19 cents and adjusted EBITDA of $538M topped estimates of $492M, but the streaming giant sees Q2 streaming adds of 5.0M, shy of the 5.4M consensus. Also, the company sees 2019 free cash flow deficit “modestly higher” at $3.5B on higher cash taxes due to its corporate structural change and additional investments in real estate and other infrastructure. Netflix still sees free cash flow improving in 2020 and each year afterwards.

IBM (NYSE:IBM) fell 2.5% in after-hours action after Q1 revenue of $18.2B missed the consensus estimate by $330M, as overall revenue fell 5% from a year ago and cloud and cognitive software revenue slipped 2%. Q1 EPS of $2.25 topped consensus by a penny. IBM reaffirmed 2019 EPS guidance of at least 5% Y/Y and free cash flow of about $12B.

Venezuela’s Guaido to seek to annul $8.7B ConocoPhillips (NYSE:COP) award.

Smart & Final to be acquired by Apollo Global (NYSE:APO).

As contributor Acting Man writes, long-term stock market sentiment as lopsided as ever.