The main headline in the currency market yesterday was that the USD/JPY (Dollar/Japanese Yen) broke a major resistance point, in fact it was a 25 year resistance line. Given the positive fundamental picture for this currency pair, and the breakout from major consolidation I think that the trade has more to room to the upside with little risk. After consolidating for all of 2015, the USD/JPY has finally broken out on heavy volume. To me that is the key: heavy volume. We saw a failed breakout on the SPY because it was on weak volume. When you have a breakout on heavy volume it means there is strong commitment to the trade and a lot of money going your way. I went long the FXY July 79 puts for $1.20. The FXY tracks the Japanese Yen vs the US Dollar. So by buying puts I am better that Yen will fall in value vs the Dollar.I am not sure how long I will hold them. I do not trade currencies that often so I will most likely just let the price action do the talking for me.

Because this is an option I need there to be a move in less than two months to make money. Another option is to just buy the currency pair, through Forex trading. If one were to do this I would put a stop at 121.50 (slightly below the breakout point). The risk is 2% and the upside in my opinion is probably 140 (a lot of analysts targets) long-term. For my puts I would like to see a double. Depending how the trade is going I may sell before the June Jobs Report, as this report is likely to have a major impact on the USD/JPY. I think the jobs report will be good considering that we have started to see better data. This only increases the likelihood of a September rate hike, and in turn the USD/JPY will strengthen. 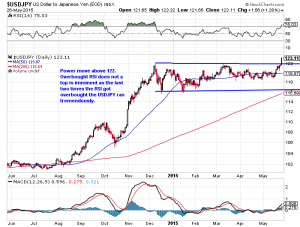