$UNXL is one of the more  controversial stocks you can own... or short.  Some call it a scam while others think the stock will more than double in price the next year.  There is a massive short position in the stock.  Over 4 million of the 9 million tradeable shares have been borrowed and sold by those betting for more downside for the stock.  The negative sentiment has traders putting their money where their mouth is and you have to respect that.  But, if the stock starts to rally, those same short sellers will have to buy back those shares they borrowed and sold.  This can lead to a "short "squeeze".

I am trading $UNXL based on my perspective of the chart and the fact that there are so many shorts in the stock.  If you've watched the market the last 5 years you know that the heavily shorted names have performed remarkably well over that time.

Short term I like the way the stock held off a spike lower today at trendline support.  This is around the $15 price and if it holds, the stock will move higher.  It is down over 60% from its recent highs, and while some may view this negatively , I view it positively as long as we hold trend-line support.  Other more widely known stocks have succumbed to dramatic declines after spiking to all-time highs and then recovered.  $GMCR, $OPEN were two stocks left for dead after breaking out like $UNXL has.  They have both recovered and I think $UNXL will as well.

The recent bout of selling has seen $UNXL decline 6 of the last 7 trading days.  Yes the short term trend is down, but as I noted that support trendline is holding and when $UNXL starts trading the other way you can expect 5-6 days of gains that will send the stock well over $20.  Out of the money calls heading through September and into the October month should be a great way to trade for this possible rally. 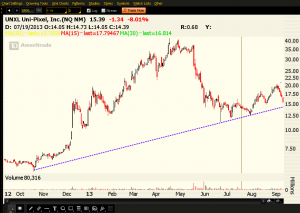 I also am looking to go further out and purchase October $21 monthly calls for $1.00

Longer term I think this stock could defy gravity and head over $40.  For now I am keeping my trades somewhat grounded and will be watching to make sure support holds.