We've had quite a few retail stocks plunging lower in early 2014. $BBY dropped over 30% in one trading session recently. $TGT continues to fall on the heels of its data breech, in which over 70 million of its customers have had  their information stolen. While $BBY and $TGT may continue to see their stocks fall, I have two retail stocks that are poised to reverse course in early 2014:

$FIVE has dropped almost $20 from its all-time high two months ago, and now trades at $36.54 a share. The stock currently sits at significant trend line support. I'm also looking for a move back over $40 in the near term.

Why is $FIVE down some 35% since November?  Just a few weeks ago they lowered their outlook.

Five Below gave Q4 adjusted EPS guidance of 44c-46c and Q4 revenue guidance of $208M-$210M, while consensus estimates were 51c and $217.6M, respectively. Additionally, the company said it saw Q4 comparable store sales down 0.5% to down 1.5%. Thomas Vellios, co-founder and CEO, stated: "We did not meet our sales expectations for the holiday season as adverse weather negatively impacted traffic to our stores, which are heavily concentrated in the Northeast and Midwest regions. This was exacerbated by the shortened holiday season during which we simply did not make up the weather-driven sales shortfall, especially in those key shopping days just prior to Christmas. In addition, we see room for improvement within certain merchandise categories that underperformed against our expectations. While clearly disappointed with our holiday comparable store sales performance, we continue to be pleased with the performance of our new stores, in particular the performance of the new Texas market."

I'm looking to purchase the February $40 CALLS for $.40, as I think the stock will recover over that level in the next few weeks. 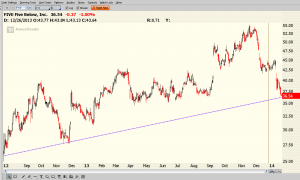 Another retailer that I think has upside in the weeks ahead: Big Lots ($BIG). The stock has been in a tailspin but, like $FIVE, the stock sits at multi-year support. 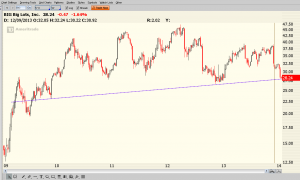 $BIG plunged to fresh 52-week lows this week and looks vulnerable to further downside. However, from a valuation and technical perspective $BIG looks to have bottomed here. I'm willing to take the risk on some February calls in anticipation of a price recovery off the recent lows.