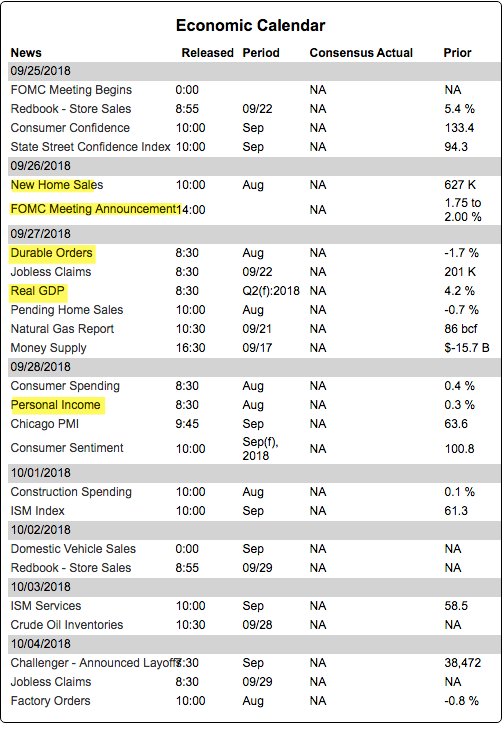 Instagram founders Kevin Systrom and Mike Krieger resigned from parent company Facebook (NASDAQ:FB), saying they plan to take some time off -- but raising the specter of growing tension over the app's future at the company. Instagram is now considered Facebook's main success story, but reports pointed to potential differences of opinion with CEO Mark Zuckerberg that echoed the April departure of Jan Koum, who founded WhatsApp before it was acquired by the social network.

China’s Vice Commerce Minister Wang Shouwen says the U.S. is putting “a knife to China’s neck” with the $200B in tariffs on Chinese goods that kicked in yesterday. During a press conference, Wang questioned how negotiations could proceed when “it’s not an equal negotiation” with the backdrop of “threats and pressure.” Wang accuses unnamed individuals of making groundless criticisms against China regarding trade and security issues. Wang: “If this continues, it will destroy in an instant the gains of the last four decades of China-U.S. relations.”

Nikkei has risen for its seventh session with chip stocks offsetting machinery stock declines on profit-taking triggered by the U.S.-China trade dispute. Investors pushed the likes of large-cap Tokyo Electron and Advantest Corp up 2.4% and 3.5%, respectively. Decliners included construction equipment makers Komatsu and Hitachi, down 1.3% and 2.6%. The Nikkei share average gained 0.3% to 23,940.26. The broader Topix gained 1% to 1,822.44, the highest level since early February.

Germany’s BDI industry association has warned uncertainties from the U.S. trade policy and Brexit are lowering demand for German goods. BDI has cut its 2018 forecast for German economic growth to 2% from the previous 2.25% and lowered its export growth estimate to 3.5% in real terms from 5%.

The EU will establish a special payment channel allowing companies to legally continue financial transactions with Iran without exposure to U.S. sanctions. The mechanism would facilitate payments related to Iranian oil trade, exports, and imports. The details of the mechanism will come after future meetings with technical experts. The special purpose vehicle was jointly announced by EU foreign policy chief Federica Mogherini and Iranian Foreign Minister Javad Zarif days ahead of the U.N. General Assembly, where Iran will be a key topic.

Under the gun: Tesla (NASDAQ:TSLA) CEO Elon Musk says the company is upgrading its logistics system in order to help make up for an "extreme shortage" of car carrier trailers. "Started building our own car carriers this weekend to alleviate load," Musk updated. Tesla's issues getting cars delivered to customers were brought up last week by AutoNation (NYSE:AN) CEO Mike Jackson, who said the EV automaker made a mistake by snubbing the franchise model. Adding to the tension, Tesla is less than two weeks away from giving its Q3 production and delivery update.

A report in the Los Angeles Times on a visual-shopping partnership between Snap (NYSE:SNAP) and Amazon.com (NASDAQ:AMZN) pointed to reasons Snap would get involved, and hinted at a longer-term motivator. The deal lets Snapchat users point their camera at an item or barcode and get one-click access to buying it at Amazon -- a feature similar to that on Amazon's own app, but Snap data suggests its users may be more prone to impulse buying, and one academic thinks it may be another signpost along a path to Snap selling to Amazon outright rather than eventually falling into the arms of Facebook (FB).

A report in El Economista says that debt-laden Spanish carrier Telefonica (NYSE:TEF) is in advanced-stage talks to sell its units in Mexico and Central America either in whole or in part. The Mexican division is valued between €1.1B-€1.9B, and Telefonica's interest in the Central America unit around €760M.

Amid criticism for skipping high-profile Capitol Hill appearances, Google (GOOG, GOOGL) CEO Sundar Pichai will meet with top Republican lawmakers on Friday. The legislators hope to address a bevy of concerns, including Google's market power, a feeling that its results are biased against conservative thought, and criticisms that the company is working with China while canceling contracts with the U.S. military. Pichai is also expected to testify publicly after the November election.

Cost concerns delay the vote on the fate of the last nuclear plant being built in the U.S. with the deadline now pushed until 5 p.m. ET today. Co-owner Oglethorpe Power voted to continue construction on the Vogtle plant in Georgia and agreed to a recent $2.2B increase in projected cost if lead partner Southern Co. (NYSE:SO) could provide a cost cap or other fiscal protection against further cost overruns. Southern supports moving forward but isn’t sure the utility would agree to the conditions.