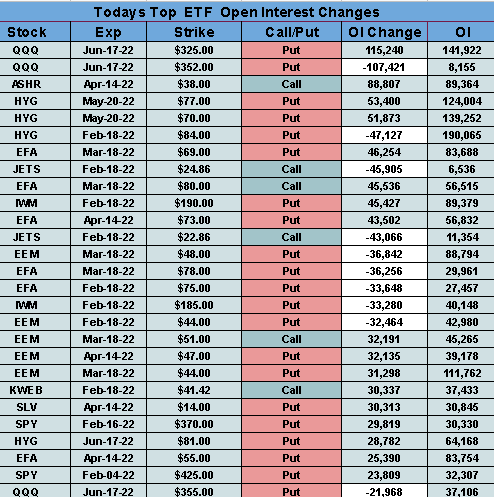 Many are still trying to size up the Fed's monetary policy for 2022 as the market heads into February. What we know so far is the central bank will begin hiking rates in March, assuming that the "conditions are appropriate for doing so," but it's anyone's guess how aggressive the FOMC will be after that as it tries to snuff out the strongest pace of inflation in decades. There is also debate over when the Fed will start reducing its balance sheet (May, June or July), though it made clear at its last meeting that pandemic-era bond-buying will come to an end next month.

How many hikes in 2022? Estimates on Wall Street now range from three rate increases all the way to seven, with the federal funds rate projected to end the year in a range of 1.25%-2.00% (the current effective floor is 0.00%–0.25%). Check out some of the forecasts below:

Barclays (3): "With reserves balances over $4T and nearly $1.5T in the [Fed's reverse repo facility,] we expect it will be difficult for short-term interest rates to trade much above the interest rate floor."

Morgan Stanley (4): "If they need to hike fast, they will. The Fed is showing urgency and being flexible."

Goldman Sachs (5): "We see a risk that the FOMC will want to take some tightening action at every meeting until the inflation picture changes."

BNP Paribas (6): "We read Fed Chair Powell's comment that this cycle is different from the previous one as an indication that the Fed's bias is for a steeper tightening than the markets and we had envisaged."

Bank of America (7): "The Fed has all but admitted that it is seriously behind the curve. With that said, the markets are doing the Fed's job of tightening financial conditions without an actual hike."

Hand over the controller

The gaming frenzy is not showing any signs of slowing down as Sony (SONY) announced a $3.6B acquisition for privately held video game developer Bungie. The latter is the beloved maker of multiplayer shooter games like Destiny and Halo, and was bought by Microsoft in 2000 (to develop games for its Xbox console) before splitting off in 2007. The company will continue to operate independently after the deal closes, and will be run by its board and the current management team. SONY +2% premarket.

Bigger picture: Sony's purchase of Bungie is the third significant videogame acquisition in as many weeks. Take-Two Interactive (TTWO) scooped up mobile game leader Zynga (ZNGA) for $12.7B, while Microsoft (MSFT) bought Activision Blizzard (ATVI) for $69B in the largest-ever takeover in the tech industry. The deal also gave Microsoft the popular Call of Duty series, and Sony may have felt the need to score its own first-person shooter game franchise to stay competitive.

"Sony and Microsoft have been in a multiyear arms race of sorts for talent and developers," noted Jefferies analyst Andrew Uerkwitz. "Being at a critical juncture in the console cycle and on the cusp of bigger subscription services, first-party titles have never been more important."

Gamifying: The Bungie deal wasn't the only one to make headlines, with the New York Times (NYSE:NYT) buying viral sensation Wordle. While the online word-guessing game was only released in October, it has already attracted millions of people who play the puzzle daily. The NYT will add the title to its burgeoning "games" segment - which it currently charges $5 a month for access - though Wordle will be free to play (at least initially) for new and existing players.

'Mother of all sanctions'

Leaders on both sides of the Atlantic are close to approving an economic and financial package known as the "mother of all sanctions" as Russia continues to boost troop numbers near the border with Ukraine. Among the penalties under consideration are cutting Russia off from international payments network SWIFT, targeting its largest financial institutions, and depriving the country of key technologies like artificial intelligence, quantum computing and semiconductors. Vladimir Putin and Russian oligarchs are also in the line of fire, as well as the nation's crowned energy sector and even the Nord Stream 2 natural gas pipeline.

Quote: "We cannot have a Munich moment again," declared U.S. Foreign Relations Chairman Bob Menendez, referring to the 1938 pact that sought to avert war by giving up parts of Czechoslovakia to Hitler (who announced the Sudetenland was his last territorial claim in Europe). "Putin will not stop if he believes the West will not respond. We saw what he did in 2008 in Georgia, we saw what he did in 2014 in pursuit of Crimea. He will not stop."

The sanctions would only go into effect if Russia invades Ukraine, but there is still discussion on what the triggers would be and how far Moscow would have to advance to see the damaging consequences of the package. The West imposed some sanctions on the Russian economy after the annexation of Crimea in 2014, but those would pale in comparison to the restrictions currently under discussion. A meeting at the United Nations Security Council also didn't do much yesterday, with both sides accusing each other of being "provocative."

Thought bubble: The U.S. has to make sure the sanctions don't end up backfiring, especially if they freeze sales of sovereign bonds, slam the domestic stock market or devalue Russia's currency. Talk of Western sanctions has already led the ruble to plunge more than 10% against the greenback since October. Washington is also discussing energy reserves in case Moscow freezes exports, while the National Security Council has been in touch with Wall Street's biggest banks about the stability of the global financial system in the wake of the potential sanctions.

Pfizer (PFE) and partner BioNTech (BNTX) are expected to file a request with the FDA as early as today for emergency-use authorization of their COVID-19 vaccine for children 6 months to 5 years old. The data is based on an approach called "immunobridging," which is used to show that vaccines work and are safe among other age groups, and typically takes far less time than efficacy trials. An approval, which would be the first vaccine available for the demographic, could happen by the end of February.

Snapshot: The trial was designed to measure if immune responses were comparable to what was reported to be protective in teens and young adults. While the two-shot regimen did create a protective immune response in children 6 months to 2 years old, it was not the case in 2-, 3- and 4-year-olds. The vaccine was still found to be safe among the cohort, but the drugmakers added a third shot to the trial to try to improve the immune response (that data will only be available in late March).

"The idea is, let's go ahead and start the review of two doses," per the report in the Washington Post. "If the data holds up in the submission, you could start kids on their primary baseline months earlier than if you don't do anything until the third-dose data comes in."

Vaccine eligibility: In the trial of children between 6 months and 5 years old, recipients were inoculated with two doses of 3-microgram shots, three weeks apart. A child-sized version of Pfizer's vaccine (10 micrograms) is currently available for 5- to 11-year-olds, at a third of the dose given to everyone else 12 and older (30 micrograms). As of mid-January, around 28% of children aged 5 to 11 are at least partially vaccinated, according to the Kaiser Family Foundation.

J.P. Morgan's Kolanovic says we're in a bear market, so buy the dip.