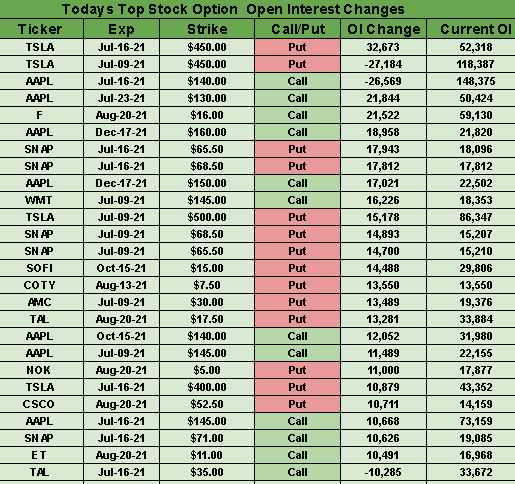 Saudi Arabia and the United Arab Emirates headed into the boxing ring for another round on Monday, before OPEC+ called it quits on a production deal. The unresolved spat between the long-time allies saw WTI crude soar another 2% to near $77/bbl, further squeezing an already tight oil market and raising concerns over inflation. At issue is the current terms of "baselines," or the measure in which each country calculates its production cuts. The UAE feels its current level of 3.2M bpd from April 2020 is too low - and should be 3.8M bpd when the deal is extended into 2022 - but the Saudis and Russia have rejected any readjustments, fearing that other OPEC members will issue similar demands.

What's at stake? Abu Dhabi is attempting to force the group to accept its request or risk unraveling the alliance. At the extremes of the equation, crude prices could make an outsized move in either direction. Failure to reach a deal could mean crude could rise even higher, but OPEC+ unity may also break down, risking a free-for-all that could send prices crashing. That scenario played out last year when a disagreement between Saudi Arabia and Russia prompted an oil price war. Months after the dispute was settled, the UAE stirred things up again by threatening to leave the cartel.

"Failing to come to a deal may provide some brief upside to the market, with reports that output would remain unchanged," explained analysts at ING. "However, realistically it could also signal the beginning of the end for the broader deal, and so the risk that members start to increase output."

Outlook: The tensions between Abu Dhabi and Riyadh are going beyond oil. While the UAE's Crown Prince Mohammed bin Zayed and Saudi Crown Prince Mohammed bin Salman once had very close relations, the former has been flexing its own geopolitical aspirations via foreign policy moves towards countries like Israel and Yemen. The Saudis have also called for foreign companies to move their regional headquarters to Riyadh (many are now in Dubai), and following the OPEC standoff, the Kingdom moved to restrict citizens' travel to the UAE. (208 comments)

Shares of DiDi Global (DIDI) are off 25% premarket to $11.60 as trading reopened after the July 4 holiday weekend. That's also 17% below DiDi's IPO price of $14, though many retail investors likely bought in a lot higher. Triggering the plunge was a Big Data crackdown by Beijing, which ordered U.S.-listed Chinese companies to be removed from app stores worldwide. While existing users can still use the apps, new subscribers have been halted while the Chinese probes are conducted.

DiDi said the app takedown in China "may have an adverse impact on its revenue in China," but is striving to "rectify any problems, improve its risk prevention awareness and protect users' privacy and data security." Also off in premarket action are truck-hailing service Full Truck Alliance Co. (YMM) an online recruiting app Kanzhun (BZ), which are down 16% and 9%, respectively. Both companies went public in the U.S. in June.

Bigger picture: Fearful of their growing influence, China is in the middle of a sweeping crackdown on the nation's biggest tech firms. Last November, Beijing pulled the planned IPO of fintech giant Ant Group, and in April, it hit Alibaba (BABA) with a record $2.8B fine over abusing its market dominance. In May, China's antitrust regulator also ordered DiDi and nine other on-demand transport companies to overhaul their practices ranging from price hikes to driver treatment.

Current investigation: China's cyber unit is commencing a review of DiDi and others to "prevent data security risks, safeguard national security and protect the public interest." The Communist Party-backed Global Times also wrote that Didi appears to have the ability to conduct "big data analysis" of individual behaviors and habits, a feature that could require strict oversight by a government that is highly concerned with social control. Didi is the most dominant ride-hailing business in China, accounting for 88% of total trips in the fourth quarter of 2020. (25 comments)

Traditional face-to-face healthcare has rocketed into a far more agile and connected model since the pandemic. That's good news for patients and investors, who can expect even more growth opportunities in remote monitoring and patient wearables. Check out these five things to know about connected health devices and remote care.

Futures linked to the Dow, S&P 500 and Nasdaq are hanging close to the flatline following a big week for the major averages, which notched fresh record highs in the wake of the U.S. jobs report. Nonfarm payrolls for June showed a strong gain of 850K on Friday, but there appeared to be enough concerns to keep the Fed from tapering its bond purchases (for now). While many expect the stock market gains to continue into the second half of 2020, others are more cautious.

Analyst commentary: "The U.S. economy is booming, but this is now a known and asset markets reflect it. What isn't so clear anymore is at what price this growth will accrue," said Michael Wilson, chief U.S. equity strategist at Morgan Stanley. "Higher costs mean lower profits, another reason why the overall equity market has been narrowing. Equity markets are likely to take a break this summer as things heat up."

Traders are also preparing for a potentially more hawkish tilt at the Federal Reserve. Minutes from the FOMC tomorrow could give some clues on the direction of monetary policy, as well as the tapering timeline. Besides the behind-the-scenes discussions, many speculate additional remarks on QE and bond-buying could come at Jackson Hole in August.

Notable statistic: Over the past three months, 85% of all the quantitative easing worldwide had been conducted by the Fed and the ECB.

Rising coronavirus cases in Israel, where much of the population is inoculated with the Pfizer (NYSE:PFE) vaccine, suggests the jab may be less effective in preventing mild illness from the Delta variant. However, it's still "too early to precisely assess vaccine effectiveness," according to Ran Balicer, chairman of Israel's national expert panel on COVID-19. This is because exposure to the variant and the likelihood of being tested are not evenly distributed across the population, while there are still overall low number of cases among fully vaccinated Israelis.

By the numbers: Pfizer's vaccine protected 64% of people against COVID-19 between June 6 and early July, down from a previous 94%. The figures coincided with the lifting of Israel's virus restrictions, but also as Delta spread through the population. Effectiveness at preventing hospitalization and severe illness ticked down to 93%, compared with at least 97% in an earlier government study.

Back in January, Israel struck a vaccines-for-data deal with Pfizer that promised to share vast troves of information with the drug giant in exchange for the continued flow of COVID-19 shots. "Israel will be a global model state," former Prime Minister Benjamin Netanyahu said at the time. "Israel will share with Pfizer and with the entire world the statistical data that will help develop strategies for defeating the coronavirus." No funding was allotted for the agreement and the county even paid a sizable premium for vaccine doses.

Go deeper: So far, 5.2M Israelis (57%) have received at least one dose of Pfizer's vaccine, while 5.6M (60%) have received both shots out of a population of about 9M. Israel has also surpassed 100K coronavirus inoculations of 12-16-year-olds, as well as 88% of the population above the age of 50, the group considered most at risk for serious cases. Helping to demonstrate the impact of the vaccine on an entire population is Israel's highly digitized universal healthcare system, which requires everyone over the age of 18 to register with one of four HMOs. (21 comments)

Hackers up their prices

Backdrop: Up to 1,500 organizations were compromised by ransomware following an incident at U.S. IT firm Kaseya, which remotely controls programs for companies that manage internet services for businesses. The breach is believed to be affiliated with the Russian-linked REvil ransomware gang and is one of the single largest criminal ransomware sprees in history. In Sweden, at least 800 stores of supermarket chain Coop couldn't open on Saturday after the attack knocked their cash registers offline.

"We're not sure if it's the Russians," said President Biden, ordering a "deep dive" by U.S. intelligence officials on what happened in the attacks. "The initial thinking was, it was not the Russian government, but we're not sure yet."

Statement from the FBI: The agency is "investigating the situation and working with Kaseya, in coordination with CISA, to conduct outreach to possibly impacted victims. We encourage all who might be affected to employ the recommended mitigations and for users to follow Kaseya's guidance to shut down VSA servers immediately. As always, we stand ready to assist any impacted entities." (178 comments)