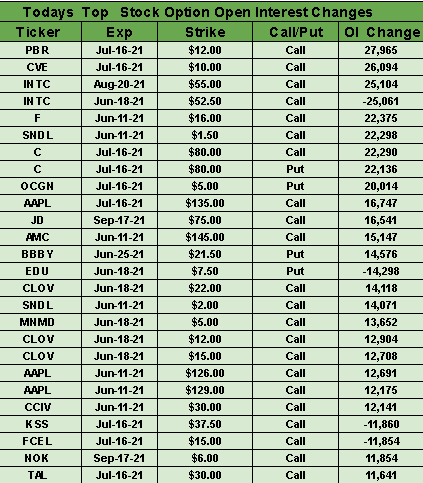 The FDA cleared the first new treatment for Alzheimer's in nearly two decades on Monday, sending shares of maker Biogen (BIIB) up 38% and adding $16.5B in market value. The company claims that Aduhelm, which has the molecular name aducanumab, slows down the memory-robbing disease by breaking up clumps of plaque formed on the brain called amyloid. The approval came just in time for Biogen, which is dealing with declining sales and the loss of patent protection for its top-selling drug, Tecfidera, which is used to treat multiple sclerosis.

Wall Street sees a blockbuster: Despite the drug's questionable efficacy, Biogen said it would charge about $56,000 a year per patient (and wouldn't hike prices for four years). Clinical trials also included people suffering from only mild to moderately severe Alzheimer's, though the drug will be available to anyone that has been diagnosed with the disease. The global Alzheimer's treatment market is meanwhile forecast to grow at a compound annual growth rate of 12.8% between 2020 and 2027, reaching more than $5.6B by 2027, according to Acumen Research and Consulting.

"We ultimately decided to use the Accelerated Approval pathway - a pathway intended to provide earlier access to potentially valuable therapies for patients with serious diseases where there is an unmet need, and where there is an expectation of clinical benefit despite some residual uncertainty regarding that benefit," said Patricia Cavazzoni, Research Director for the FDA Center for Drug Evaluation.

Additional details: Unlike other Alzheimer's drugs that come in pills, Aduhelm requires monthly infusions. Before prescribing the drug, doctors will first make sure their patient's brain has amyloid buildup, which typically requires an imaging scan or spinal tap. Patients will also need to be monitored with MRIs, to guard against small brain bleeds, hemorrhages, or an accumulation of fluid. About 6M people are suffering from Alzheimer's in the U.S., and as many as 1.4M could be eligible to take Aduhelm, per estimates from Cigna. (116 comments)

There wasn't much movement from U.S. stock index futures overnight following a mixed session on Monday that saw heavy volumes once again migrate to meme stocks. Shares of AMC (AMC), BlackBerry (BB) and GameStop (GME) all popped by double-digits, and are edging up again in premarket trade. Meanwhile, the SEC is watching the ongoing volatility in the market for "disruptions, manipulative trading or other misconduct" and "vowed to protect retail investors."

Other traders are staying on the sidelines before the latest inflation figures on Thursday. Economists expect the CPI to surge by another 4.7% Y/Y in May after rising by 4.2% on an annual basis in April. The latter figure marked the fastest expansion in the index since 2008, as analysts debate whether inflation will stick around and its related impacts on the economy.

The good: The current spike is being driven by "the unprecedented role of outliers," wrote Jan Hatzius, chief economist at Goldman Sachs. "All this suggests that Fed officials can stick with their plan to exit only very gradually from the easy current policy stance."

The bad: "In their March forecasts, the Fed projected that, despite clearly achieving all of their long-term economic goals by the end of 2023, they did not foresee any increase in the federal-funds rate before 2024," said David Kelly, chief global strategist at J.P. Morgan Asset Management. "If, after reassessing their forecasts for the economy next week, the Fed maintains this extraordinarily dovish stance, then the risk of a boom-bust recession will have increased to a substantial degree."

The ugly: "Never before have we seen such coordinated expansionary fiscal and monetary policy. This will continue as output moves above potential," added David Folkerts-Landau, Deutsche Bank's chief economist. "It may take a year longer until 2023 but inflation will re-emerge. And while it is admirable that this patience is due to the fact that the Fed's priorities are shifting towards social goals, neglecting inflation leaves global economies sitting on a time bomb. The effects could be devastating, particularly for the most vulnerable in society."

Amazon's (NASDAQ:AMZN) Sidewalk project goes live today without asking your permission. The "neighborhood network" pools local Internet connections from millions of Amazon Echo smart speakers and Ring devices to let smart devices have a wider range of operation. While users have not been asked to opt-in, they could still turn the capability off, though their devices won't be able to access the network.

How much data will it use? "The maximum bandwidth of a Sidewalk Bridge to the Sidewalk server is 80Kbps, which is about 1/40th of the bandwidth used to stream a typical high definition video," according to Amazon. "When you share your Bridge's connection with Sidewalk, total monthly data used by Sidewalk, per account, is capped at 500MB, which is equivalent to streaming about 10 minutes of high definition video."

How does it work? Signals from all of Amazon's neighborhood devices join together to create what’s called a mesh network. The low-bandwidth wireless grid can stretch half a mile to connect hard-to-reach areas across urban and suburban America. Amazon isn't charging for Sidewalk, though "standard data rates from Internet providers may apply."

Outlook: Plenty of concerns abound, like helping Amazon build a network likened to Big Brother or the potential hacking into private connections. However, Amazon says Sidewalk is built with three layers of encryption to "secure data traveling on the system and keep customers safe and in control." There are also many positive uses for the project. Besides extending the range of connected devices, Amazon Sidewalk is partnering with CareBand to track people with dementia, and is adding smart lock-maker Level and Bluetooth lost-item tracker Tile to the project.

Many parts of the economy, like consumer-facing industries or trade-related fields, have returned to the workplace long ago. Other companies are re-establishing themselves in the wake of the coronavirus pandemic, which sped up a world that was in the midst of a digital revolution. Employers are weighing two important forces - the need for in-person creativity and connections, as well as the flexibility and efficiency in working from home - and that's creating some interesting dynamics when it comes to the future of the office.

Stay at home: Despite mega real estate investments in recent years, including the 61-floor Salesforce Tower in San Francisco, CEO Marc Benioff feels that there's no return to the pre-COVID days. "The past is gone," he declared. "We've created a whole new world, a new digital future, and you can see it playing out today." Salesforce (NYSE:CRM) expects 50% to 60% of employees will continue to work from home, up from around 20% before the pandemic, and even bet big on the new way to work by shelling out $27.7B for Slack Technologies (NYSE:WORK). As for all the unused office space, Benioff suggested it will be used for training facilities and cultural engagement centers.

Get back to the office: "I'm about to cancel all my Zoom meetings," JPMorgan's (NYSE:JPM) Jamie Dimon said last month. "And everyone is going to be happy with it, and yes, the commute, you know people don't like commuting, but so what." Citing business lost to rivals, the bank is setting a goal of having 50% of workers rotating through offices by July and believes its buildings will be full by the fall. Dimon isn't the only one in financial services to castigate WFH culture. Goldman Sachs (NYSE:GS) CEO David Solomon recently called the arrangements an "aberration" that needs to be quickly corrected.

Hybrid model: Apple (NASDAQ:AAPL) has circulated a memo saying most employees will be asked to come into the office three days a week from early September, with the option of working from home on Wednesdays and Fridays. Staff will also be able to work remotely for up to two weeks a year, though managers will need to approve those requests. Last month, tech rival Alphabet (GOOG, GOOGL) notified employees of its hybrid work plans, with "60% of Googlers coming together in the office a few days a week, another 20% working in new office locations and the last 20% working from home." (7 comments)

What if the military could deliver supplies and equipment across the world in under one hour via quick trips through space? What if that technology could eventually be leveraged to enable point-to-point commercial space travel anywhere on the globe? Those realities may be possible in the future, with the U.S. expanding a small development program that wants to use reusable rockets for a program called Rocket Cargo.

"The Department of the Air Force seeks to leverage the current multi-billion-dollar commercial investment to develop the largest rockets ever, and with full reusability to develop and test the capability to leverage a commercial rocket to deliver AF cargo anywhere on the Earth in less than one hour, with a 100-ton capacity," according to the latest budget proposal from the Pentagon. "The Air Force is not investing in the commercial rocket development, but rather investing in the Science & Technology needed to interface the capability with DoD logistics needs, and extend the commercial capability to DoD-unique missions."

Who would vie for the contract? SpaceX (SPACE) would be the likeliest candidate, but others that competed under NASA's Commercial Lunar Payload Services program may also be looking for some business. Those include Blue Origin (BORGN), Firefly Aerospace, Lockheed Martin (NYSE:LMT), Masten Space Systems and Sierra Nevada Corporation. Nearly $50M was allocated to the Rocket Cargo concept, but it could be years and billions of more dollars until things finally take off. Example: The Commercial Crew program for NASA took almost a decade to come to fruition, and it's currently only launching a handful of astronauts to the International Space Station.

Go deeper: Point-to-point space travel is something out of the science fiction theater, though it's increasingly being looked upon as an emerging industry. The space tourism market, like the one being pursued by Virgin Galactic (NYSE:SPCE), could be a precursor that could bring costs down, though other challenges would need to be overcome. Flying over land masses presents problems, as well as the logistics, infrastructure and last-mile travel to proposed spaceports. Safety concerns would additionally need to be addressed and customers would need to feel that trips through space are routine as aviation transportation. (24 comments)

JNJ (NYSE:JNJ) faces steep decline in demand for COVID vaccine in the U.S.