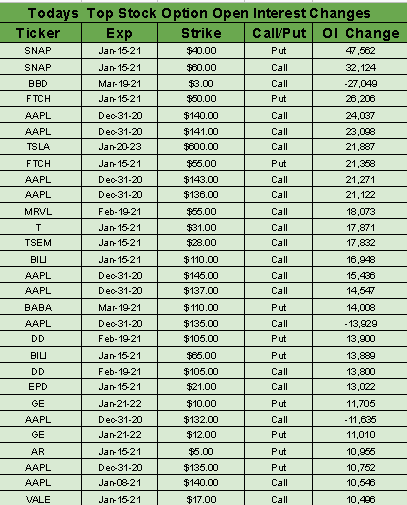 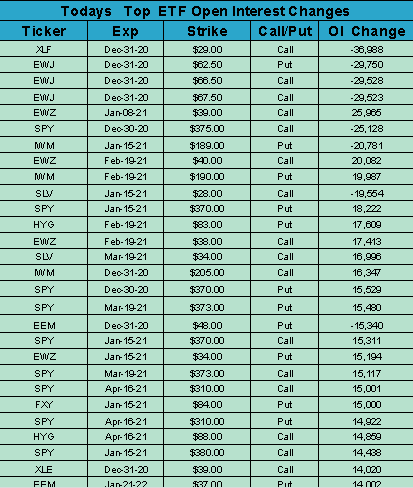 More stock records seem to be in store for today, with futures ahead by 0.5%, after the signing of a COVID relief bill that lifted reopening plays like cruise lines, airlines and casinos. Megacaps led the major averages on Monday, while nine of the 11 S&P sectors ended in the green amid continuing support for the Santa Claus rally.

"The market right now is clearly foaming at the mouth," said Charlie McElligott, a market analyst with Nomura Securities, though the rapid gains seen this year are dividing some investors on how to proceed in 2021. The S&P 500 is up 15.6% for the year and the Dow has advanced 6.5%, while the Nasdaq has soared more than 43% despite the pandemic.

The bears: Ominous parallels have been made between this market and the internet bubble, and a correction could at least be in the cards. Valuations are also stretched beyond memory with margin debt at records, while traditional stock metrics and fundamentals have gone out the window. Runaway shares for recent IPOs like DoorDash (NYSE:DASH), Airbnb (NASDAQ:ABNB) and Snowflake (NYSE:SNOW) could additionally cause some alarm, especially when the companies aren't profitable and CEOs express bewilderment over their stock prices.

The bulls: Assurance from the Fed that it will continue easy money policies, keeping markets stable and interest rates low. Retails investors, who have piled into the market this year, also seem to be a driving force for the market's upward trajectory. The contentious presidential election is now over and a national vaccine rollout further signals the start of an eventual return to normal.

All aboard the $2,000 stimulus bandwagon?

The U.S. House of Representatives just passed a bill called the CASH Act of 2020 that would increase the amount of second stimulus checks from $600 to $2,000 after a call from President Trump to increase the payments. That puts him and Congressional Democrats on the same side of an issue, though it remains to be seen if Republicans in the Senate will follow suit. Strange times indeed.

More about the bill: The CASH Act would also boost the amount awarded for each dependent to $2,000 (e.g. a family of four would get an $8,000 second stimulus check instead of a $2,400 payment). It would also include an additional amount for older children, elderly parents that have moved in, or anyone else that one supports and can claim as a dependent on upcoming tax returns. Moreover, the legislation retroactively amends the law authorizing the first round of stimulus checks (under the CARES Act) so that all dependents would qualify for the extra $500 payments allowed for children age 16 and younger.

FAQ: Is the stimulus check taxable income and how will it effect my tax return? The direct payments will not factor into income-tax liability, and won't influence, offset or factor into the size of your refund.

What will Senate Republicans do? The situation is fluid, so stay tuned for imminent developments. So far, there are some Republican senators who back higher stimulus checks like Josh Hawley (R-Mo.) and Lindsey Graham (R-S.C.), while lawmakers could be pressured by constituents who are struggling financially. President Trump is also behind the effort, which may be enough to trigger support for larger payments.

The options: Senate Majority Leader Mitch McConnell hasn’t said whether the Senate would take up the House bill, make an attempt to vote on a different one that could increase direct payments or simply ignore the legislation. The silence could be interpreted as a lack of support for the House bill due to the price tag of the increased payments, which would cost $464B, according to the Joint Committee on Taxation.

Federal officials have launched new drone rules that could help open the skies for widespread commercial deliveries, allowing operators to fly small drones over people and at night under certain conditions. The regulations will give the FAA and law enforcement a handle on what's actually flying around in the skies, requiring remote identification technology to pinpoint them from the ground.

Meet the "Remote ID" standard: The new rules eliminate requirements that drones be connected to the internet to transmit location data, but they must broadcast remote ID messages via radio frequency broadcast (meaning they can be used in areas without internet access). Drone manufacturers will have 18 months to begin producing drones with Remote ID, and operators will have an additional year to provide Remote ID.

Other rules: For at-night operations, drones must be equipped with anti-collision lights that can been see for three miles. They must also "not cause injury to a human being that is equivalent to or greater than the severity of injury caused by a transfer of 25 foot-pounds of kinetic energy upon impact from a rigid object" and "does not contain any exposed rotating parts that could lacerate human skin upon impact with a human being."

Quote from FAA Administrator Steve Dickson: "The new rules make way for the further integration of drones into our airspace by addressing safety and security concerns. They get us closer to the day when we will more routinely see drone operations such as the delivery of packages."

Some history: UPS (NYSE:UPS) won the government's first full approval to operate a drone delivery airline back in October 2019, while Alphabet's (GOOG, GOOGL) Wing became the first company to get certification for a single-pilot drone operation. This past summer, the FAA granted Amazon (NASDAQ:AMZN) permission for delivery trials, while Walmart (NYSE:WMT) jumped into the drone delivery race in September.

For the first time in 21 months, Boeing's (NYSE:BA) 737 MAX on Tuesday will fly paying passengers in the U.S. via an American Airlines (NASDAQ:AAL) flight that will depart Miami International Airport at 10:30 a.m. ET for New York's LaGuardia Airport.

What happened: Two fatal crashes that killed 346 people and a scathing report from the U.S. Senate have left some customers skeptical of stepping back on board the jet, so carriers are allowing passengers to change their flights for free if they feel uncomfortable. With the passage of time, Americans are less familiar with the two fatal Boeing 737 MAX crashes, but if they are made aware of those disasters, more than half say they would probably avoid the aircraft, according to a new Reuters/Ipsos opinion poll.

Outlook: It will soon be harder to avoid the plane. By the end of February, 91 daily American flights will be flown by the MAX, according to travel analytics firm Cirium, while United (NASDAQ:UAL), Southwest (NYSE:LUV) and Alaska Airlines (NYSE:ALK) will resume service in the first quarter. Brazilian carrier Gol, which operates an all-Boeing 737 fleet, was the first airline to relaunch the jets earlier this month.

While the return of the MAX comes at a time when the coronavirus pandemic has thrust the aviation industry into its worst crisis, a recovery in air travel may benefit Boeing, as well as other industrial stocks. The 737 MAX planes, which are more fuel-efficient than previous models, are central to the plans of airlines around the world, with more than 3,000 of them on order.

Ant Group is going marching, not to get out of the rain, but to avoid a regulatory crackdown in China that seeks to rein in Jack Ma's online finance empire. Bloomberg reports that the company is planning to fold its financial operations into a holding company that could be regulated more like a bank, potentially crippling the growth of its most profitable units due to additional capital restrictions.

Bigger picture: Any unit that will require a financial license would be moved into the holding company, including wealth management services, consumer lending, insurance, payments and MYbank, an online lender in which Ant is the largest shareholder. "This means China is still trying to encourage domestic consumption, and they need platforms like Ant to help with consumer loans," said Wang Zhen, a Shanghai-based analyst with UOB-Kay Hian Holdings. "The key is that consumer lending shouldn’t be over-leveraged."

Backdrop: Ant was poised for a public listing in November that would have valued it at more than $300B. Regulators then intervened and scuttled world's largest IPO amid reports that founder Jack Ma criticized the Chinese government for tightening financial regulation. Beijing has also opened an antitrust probe into Alibaba for monopolistic practices.

On the move: Shares of Alibaba (NYSE:BABA), which owns a third of Ant, appear to be getting some relief on the news, climbing 4% to $230/share in premarket trade. It follows a near 30% tumble since the stock hit a high of $319.32 at the end of October.