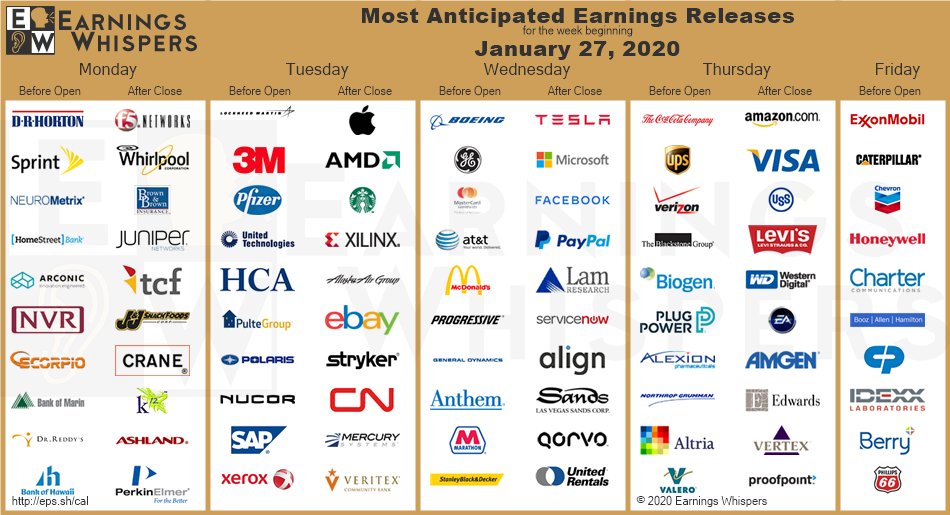 It was only a year ago that Apple (NASDAQ:AAPL) reported a bleak holiday quarter, though the stock has more than doubled over the past 12 months to a lofty valuation of $1.4T. Analysts expect the tech giant to handily beat EPS and revenue estimates after the bell today, with an earnings report that will be the first to include Apple's TV+ streaming service, as well as holiday sales of the new iPhone 11 line and popular AirPods. Wearables and services will likely remain Apple's growth engines, though a report from the Nikkei overnight suggested that the company is targeting production of 80M iPhones in the first half of 2020, an increase of more than 10% from the previous year's output.
Go deeper: D.M. Martins Research says this could be a killer quarter for Apple.

Coronavirus concerns hammered global stocks on Monday, with Wall Street recording its biggest single-day decline since October, though traders are hoping a full menu of earnings reports today can pull shares out of the latest downtrend. On close watch are Q4 results from Apple (AAPL) and AMD (NASDAQ:AMD), as well as 3M (NYSE:MMM), Starbucks (NASDAQ:SBUX), Pfizer (NYSE:PFE), eBay (NASDAQ:EBAY), Harley-Davidson (NYSE:HOG) and Lockheed Martin (NYSE:LMT). U.S. equity futures were up by nearly 1% overnight, but recently pared some early-session gains to 0.3% on news that Hong Kong would suspend high-speed rail travel to the mainland, reduce flights and limit individual travel permits.
Go deeper: 'Viral Outbreak A Fortuity For Alibaba, JD.com, And Tencent' by ALT Perspective.

The U.S. Treasury yield curve, measured by the gap between yields on three-month and 10-year bonds, briefly inverted overnight for the first time since October as Treasuries rallied for a sixth day. The two-year/five-year curve already inverted on Monday, while the gap between two-year and 10-year yields - considered a recession signal - was at the flattest since Nov. 29. "If the signs were to multiply, there could be a more severe impact not just in China but globally," said Philip Shaw, chief economist at Investec. "Markets are starting to speculate the Fed could bring rates down by summer."

Nike (NYSE:NKE) has removed all Kobe Bryant-related items from its online store following the tragic death of the basketball legend. "He was a beloved member of the Nike family. We will miss him greatly. Mamba Forever," the company wrote in a tribute, as it reevaluates its strategy on how to handle the signature gear. Bryant had an endorsement deal with Nike, which paid him $8M annually over five years.
Go deeper: Degree of Nike's overvaluation poses substantial risk to investors, writes Wealth Insights.

The production of General Motors' (NYSE:GM) new autonomous vehicle, called the Cruise Origin, will take place at its Detroit-Hamtramck plant, cementing the company's hometown as a hub of future technology. Manufacturing of the passenger shuttle will come "soon after" the reopened facility starts building its first new vehicle, an electric pickup truck, in late 2021. The self-driving Origin is a pod-shaped people-mover with no steering wheel, pedals or other manual driving controls.
Go deeper: GM is well-capitalized for what lies ahead, according to Cash-Centered Creep.

A longstanding investigation into bribery and corruption has been hanging over Airbus (OTCPK:EADSY) for years amid claims that it used third-party consultants to help secure lucrative commercial orders. The planemaker has now reached a so-called deferred prosecution agreement - with fraud agencies in the U.S., U.K. and France - that will allow the company to avoid formal charges, but requires it to pay what is expected to be a record fine. The probes had already prompted a nearly complete overhaul of Airbus' top management and sales teams, as well as a new ethics and compliance system.

SpaceX (SPACE) yesterday called off a scheduled launch of a Falcon 9 rocket about a half-hour before liftoff from Cape Canaveral, but will attempt the mission again on Wednesday. Another 60 Starlink broadband internet satellites are set to be deployed, resulting in a total constellation of 240 that are operating in low Earth orbit. At least 400 Starlink satellites will offer "minor" broadband coverage, though SpaceX plans to operate an initial block of 1,584 worldwide and has FCC approval for a fleet of up to 12,000.

Johnson & Johnson (NYSE:JNJ) CEO Alex Gorsky testified in court for the first time on Monday in a jury trial over allegations that the company's signature baby powder causes cancer. "I was told by experts in these fields that in fact we were using the most appropriate, most up-to-date methodologies to make sure our talc was safe," he told a New Jersey state courtroom. More than 16K plaintiffs have filed lawsuits against J&J in U.S. state and federal courts alleging the talcum powder caused cancer and the company failed to properly warn consumers of the risk.

Jeff Bezos' ex-wife, MacKenzie Bezos, has sold about $400M worth of the Amazon (NASDAQ:AMZN) stock that she received as part of the couple’s divorce settlement. Word of the sale came indirectly, as Jeff retains voting rights over her shares. A recent proxy holding shows 19.5M shares at year-end, or about 200K less than the 19.7M she's calculated to have received, but even after the sale, MacKenzie's Amazon holdings amount to nearly $36B.

With Brexit officially "done" this coming Friday, the discussion is starting to shift to what an EU-U.K. trade deal will look like, though currently, the two sides remain far apart. "There will be no compromise on the single market. Never, never, never," EU chief Brexit negotiator Michel Barnier said at Queen's University Belfast. "It is our main asset on the EU side... Never will the EU compromise, (make) fragile or unravel the single market, never."

Muilenburg resigns from Caterpillar (NYSE:CAT) board.