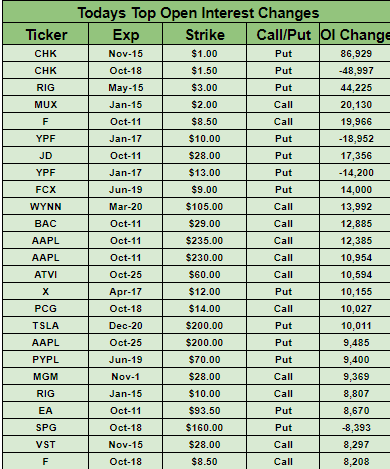 The economic war against China is moving in a new direction, though the Trump administration said it's unconnected to trade negotiations set to resume in Washington in the coming days. 28 Chinese entities have been added to an export blacklist due to Beijing's repression of Muslim minorities, a move that will bar them from buying American components without government approval. U.S. stock index futures fell 0.6% following the decision, as China signaled it would hit back over the measures and "urged the U.S. side to immediately correct its mistake."

Chinese state television CCTV is suspending current broadcast arrangements for the NBA's pre-season games after NBA Commissioner Adam Silver defended Houston Rockets General Manager Daryl Morey's tweet in support of the Hong Kong protests. "We believe that any speech that challenges national sovereignty and social stability is not within the scope of freedom of speech," CCTV said in a statement. Alibaba (NYSE:BABA) and JD.com (NASDAQ:JD) appear to have also removed items related to the Houston Rockets, while Tencent (OTCPK:TCEHY) said it would stop showing Rockets matches and news related to the team.
Go deeper: 'Alibaba: Don't Fear The Delisting Chatter' writes Stefan Redlich.

Samsung Electronics (OTC:SSNLF) expects Q3 operating profit to tumble 56% to 7.7T won ($6.44B) - as a slump in its memory chip business continued to weigh on earnings - though the figure was still better than that forecast by analysts. The news saw the stock rise 2.4% in Korea overnight, also boosted by enthusiasm that the tech giant could be nearing a rebound. Strong sales of the new Galaxy Note 10 have been recorded at home and in Europe, while there are early signs Samsung's global memory chip business will stabilize next year.
Go deeper: A lookback on Samsung demand by Hyundai Motor Securities.

Conceding it hadn't won over management, Hong Kong's bourse (OTCPK:HKXCY) has dropped an unsolicited £32B offer for the London Stock Exchange (OTCPK:LDNXF), but said it still believed a combination would be "strategically compelling." Political turmoil engulfing Hong Kong and the perceptions of Beijing's growing influence over the city was another key obstacle to any deal. In walking away from the transaction, HKEX clears the way for LSE to conclude its own $14.5B plan to acquire data and analytics company Refinitiv (TRI, BX).

The U.S. is looking at ways to funnel money to Huawei's European rivals, as officials warn that the Chinese company is becoming dangerously dominant in the global race for 5G, FT reports. Officials have suggested issuing credit to companies such as Nokia (NYSE:NOK) and Ericsson (NASDAQ:ERIC) to enable them to match the generous financing terms that Huawei offers to its customers. Others have asked U.S. companies Oracle (NYSE:ORCL) and Cisco (NASDAQ:CSCO) whether they would consider entering the radio transmission market, though the companies have warned it would be too expensive and time-consuming to do so.
Go deeper: Nokia is a Buy despite recent hiccups, says William Daniel.

Boris Johnson told German Chancellor Angela Merkel on a call this morning that a Brexit deal is "essentially impossible" if the EU demands Northern Ireland should stay in the bloc's customs union. Brexiteers fear the backstop would limit the capacity for new independent trade deals, as well as a commitment to EU rules with no influence over them. Merkel responded that a deal would never be possible unless Northern Ireland stayed in a customs union, a juncture the two called a "clarifying moment." Sterling -0.6% to $1.2220.

The federal budget deficit for 2019 is estimated at $984B, a hefty 4.7% of gross domestic product and the highest since 2012, according to the Congressional Budget Office. Unsustainable path? The deficit, which has grown every year since 2015, is $205B higher than it was in 2018, a jump of 26%. Higher levels of debt increase borrowing costs, making it hard for the government to battle economic downturns and increase the share of future spending allocated to paying off interest costs.

E-cigarette vapor causes lung cancer and potentially bladder cancer in mice, according to researchers at New York University. Out of 40 mice exposed to e-cigarette vapor with nicotine over 54 weeks, 22.5% developed lung cancer and 57.5% developed precancerous lesions on the bladder, while none of the 20 mice exposed to e-cigarette smoke without nicotine developed disease. The finding backs up a separate vaping study by the University of Southern California on the molecular change in the oral tissue that causes cancer.
Go deeper: Related stocks include MO, PM, BTI, VGR and OTCQX:IMBBY.

About 40 state attorneys general will participate in an antitrust investigation of Facebook (NASDAQ:FB) led by New York Attorney General Letitia James, according to The Washington Post. In September, James had announced a probe with seven other states and the District of Columbia into whether the social media giant has "endangered consumer data, reduced the quality of consumers' choices, or increased the price of advertising." Facebook, which owns one-time rivals Instagram and WhatsApp and has 2.4B monthly users, agreed in July to pay a $5B FTC settlement for various privacy violations.

The botched IPO of WeWork (WE) and a sharp decline in shares of Uber (NYSE:UBER) and Slack (NYSE:WORK) has analysts beginning to calculate the damage for Masayoshi Son's SoftBank Group (OTCPK:SFTBY). Mitsubishi UFJ Morgan Stanley Securities cut its profit estimate for SoftBank’s Vision Fund, its main investment vehicle, by ¥580B ($5.4B) to an operating loss of ¥367.6B. Sanford C. Bernstein & Co. estimates that the Vision Fund's writedown alone could be as much as $5.93B, with another $1.24B drop for the portion of WeWork owned by SoftBank.

Airbus (OTCPK:EADSY) ahead of Boeing (NYSE:BA) in aircraft sales race.