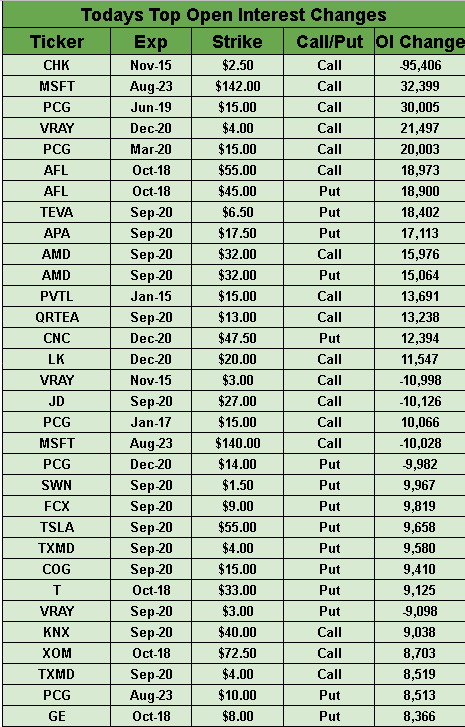 Marking the first time the companies have pointed to China as a source of disinformation campaigns, Twitter (NYSE:TWTR) and Facebook (NASDAQ:FB) said they dismantled a state-backed social media operation that sought to undermine protests in Hong Kong. Twitter suspended nearly 1,000 active accounts, and removed approximately 200,000 before they were live, while updating policies to prohibit advertising from state-controlled entities going forward. The latest events come as social media companies fall under pressure to stem illicit political influence campaigns online, especially ahead of the U.S. election in November 2020.

Wall Street rose sharply on Monday as a rebound in bond yields continued, easing ongoing recession fears. While the rally continued overnight, stock index futures have now given back gains and are hugging the flatline. Traders remain focused on U.S.-China trade relations after a temporary reprieve for Huawei, and on monetary policy, after President Trump said the central bank showed "horrendous lack of vision." He also called on the Fed to instigate a rate cut of 1%, as well as a package of QE measures to stimulate the economy and efforts to address dollar strength.
Go deeper: Jeff Miller comments on the week's big events.

A coalition of state attorneys general is getting closer to a full-scale joint antitrust probe of Big Tech, WSJ reports, which would place more pressure on an industry facing multiple federal looks. Likely in the crosshairs are the big four: Facebook (FB), Amazon (NASDAQ:AMZN), Apple (NASDAQ:AAPL), Google (GOOG, GOOGL). FTC Chairman Joseph Simons also warned overnight that any plan by Facebook to integrate Instagram and WhatsApp more closely could hinder attempts to break up the social media giant.

The U.S. government's decision to add more Huawei affiliates to a blacklist is "unjust" and "politically motivated" and will not help the country advance its technological leadership, the Chinese telecom equipment supplier said in a statement. On Monday, the U.S. Commerce Secretary extended by another 90 days a temporary reprieve for Huawei to continue doing business with American companies, but the Bureau of Industry and Security added another 46 Huawei affiliates to the blacklist, bringing the total up to over 100.
Go deeper: Founder Ren Zhengfei warns Huawei is at a 'live or die moment.'

The plus wars begin

Reports suggest that Apple (AAPL) has committed to spend more than $6B on original TV shows and movies for its forthcoming Apple TV+ service, which will likely launch in the fall and beat Disney+ (NYSE:DIS) to market. Sources say Apple is weighing a price of $9.99 a month with a likely free trial period (the Mouse House plans to charge $6.99/month for its offering). In separate news, a former Disney accountant said she filed a series of whistleblower tips with the SEC alleging the company has materially overstated revenue for years.
Go deeper: Disney valuation metrics.

Tesla (NASDAQ:TSLA) is once again offering to rent solar panels to homeowners in a bid to revive its slumping home solar business. Rentals will be available in six states, starting as low as $50 per month (plus tax) with no upfront costs or long-term contract. Once among the largest installers of renewables through SolarCity, the company is now a distant third in U.S. solar power behind Sunrun (NASDAQ:RUN) and Vivint Solar (NYSE:VSLR), which deployed 103 and 56 megawatts of new installations last quarter, respectively. Tesla only installed 29 megawatts.
Go deeper: Compare other solar names in the industry.

Get rid of the Irish backstop

In a letter to European Council President Donald Tusk late Monday, U.K. Prime Minister Boris Johnson said the controversial Irish backstop plan was "unviable" and must be removed. He also hinted that such an effort could see a Brexit deal approved by a majority of parliament before an Oct. 31 deadline for the U.K. to leave the bloc. Brexiteers fear the backstop would prevent the U.K. striking trade deals with other nations after Brexit, while the EU maintains it's essential for the free movement of goods, services and people. Sterling -0.3% to 1.2090.

A €50B budget is necessary next year to bring about a "shock" fiscal stimulus, according to Matteo Salvini, the leader of Italy's ruling League party. He recently pulled the plug on a coalition government with the anti-establishment 5-Star Movement, starting a potential countdown to elections, which could complicate the nation's preparations for the 2020 budget. Investors must now wait to see if a fragmented parliament and Italian President Sergio Mattarella can find an exit strategy that will, at the very least, provide some certainty about the country's immediate future.

Pimco has pared its positions in government debt on fears that a breakthrough in U.S.-China trade talks could trigger a violent selloff, putting an end to one of the biggest fixed income rallies in history. Several big Pimco funds controlled by investment chief Dan Ivascyn, including the $128B Pimco Income Fund (PONAX, PIMIX), have therefore been lightening up on their positions. "We're a lot more defensive," he declared. "Even if we get a narrow trade agreement [between the U.S. and China] we could see a pretty powerful snapback in yields."