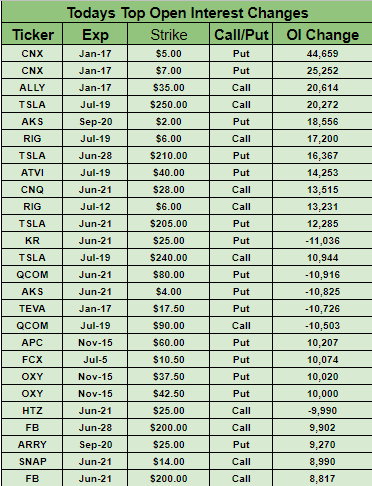 It could amount to the biggest catalyst for digital assets in their decade-long existence. Facebook (NASDAQ:FB) has unveiled a consortium to create an open-source digital currency called Libra, set to launch in the first half of next year, which would allow consumers to send money around the world easily and for free. While Libra won't be run by Facebook - but rather by a nonprofit association and backed by relatively stable government money - the company does have a plan to profit from it with a new subsidiary, Calibra, which is building a digital wallet for storing and exchanging the currency. FB +2.5%premarket.

ECB President Mario Draghi is ready to launch another round of stimulus, saying the central bank could cut interest rates again or provide further asset purchases if inflation doesn’t reach its target. The euro sank 0.3% to $1.1183 following the comments at the ECB Forum. "If the crisis has shown anything, it is that we will use all the flexibility within our mandate to fulfill our mandate - and we will do so again to answer any challenges to price stability in the future," he told the audience in Sintra, Portugal.

Worries over the Middle East appeared to put slight pressure on U.S. stock index futures overnight, but stimulus talk from Mario Draghi has turned markets around. DJIA futures are now ahead by 100 points, while the S&P 500 is up 0.5% and the Nasdaq is 0.8% higher. More easy monetary policies from the world’s biggest central banks may be in store as the Fed begins a key two-day meeting that many expect will clear the way for a cut in interest rates.

Sterling fell to its weakest level of 2019 on Monday, sliding 0.5% to $1.2532. According to Peter Kinsella, the global head of currency strategy at Union Bancaire Privee, frontrunner Boris Johnson is now priced in, but the EU reaction to him is not, so "the optics for the pound by the end of July are going to look horrific." Johnson will face a television debate for the first time today as his position on a no-deal Brexit meets further scrutiny.

Boeing (NYSE:BA) didn't announce a single new order on the first day of the expo, while rival Airbus (OTCPK:EADSF) recorded orders and options for 123 planes, according to CNBC. The report reinforces Boeing CEO Dennis Muilenburg's view that this year's Paris Air Show would be less about orders and more about reassuring customers and suppliers that the company is making progress on getting the grounded 737 MAX back in the air. A spokesperson also said Boeing had no plans to change the name of the 737 MAX, following rumors that it was prepared to do so to improve its future marketing of the aircraft.

Would you travel aboard an unpiloted plane? According to a new survey from Ansys, 70% of respondents said they would fly without a pilot in their lifetime, while 58% said they would consider it in the next 10 years. At the Paris Air Show on Monday, the chief salesman for Airbus (OTCPK:EADSY) announced his company already has the technology to fly passenger planes without pilots at all - and is working on winning over regulators and travelers to the idea. Airbus further hopes to be selling hybrid or electric passenger jets by around 2035.

Reorganizing ahead of HK listing?

Alibaba (NYSE:BABA) has revealed its most significant business reshuffle since co-founder Jack Ma announced his pending retirement, with CFO Maggie Wu moving to oversee the firm's strategic investments unit. The change comes as the company invests in new business lines like cloud computing as a boom in its core e-commerce division has peaked and revenue growth has slowed. Alibaba's supermarket division, Freshippo, will also become a standalone business, and enterprise software unit DingTalk will be merged into its cloud unit.

Sourcing from other countries besides China will raise costs, in many cases more than the 25% tariffs, U.S. companies told a panel of officials from the USTR, the Commerce and State Department, and other federal agencies on Monday. Moving operations to Vietnam and other nations will also not be feasible for years due to a lack of skills and infrastructure in those locations. The U.S. blacklisting campaign against Huawei is additionally taking a toll, with the company’s founder forecasting a hit to revenue of about $30B this year and next.