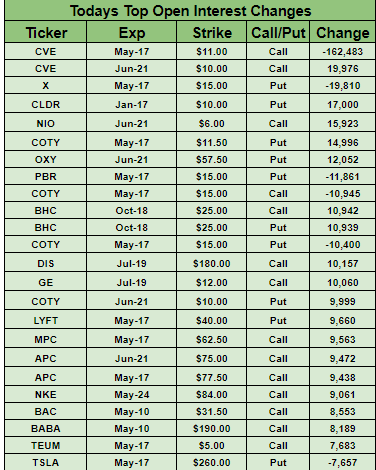 U.S. markets on Monday recovered most of their lost ground after a steep initial plunge, as stocks stabilized amid hopes that a trade agreement could get back on track. China has confirmed that Vice Premier Liu He will visit the U.S. on May 9-10 ahead of a Friday deadline President Trump has set for an increase in tariffs, after Washington accused Beijing of "reneging" on its trade promises. Dow futures are down 91 points, with the S&P 500 and Nasdaq pointing to opening losses of 0.4%, while fears appeared to be waning in Europe and Asia, where stocks were trading mixed.

A new escalation of retaliatory tariffs would weigh on the global economy, with an attempt at a new deal likely not occurring until later in 2019, or even in 2020. The two sides could also reach a deal by this weekend, with President Trump's tweets needed to show China hawks that he was being tough to avoid a political backlash at home. Even if a deal isn't reached by the end of this week, it may not trigger a full-blown return to confrontation, with Chinese officials possibly making some overtures to the U.S. side.

Can May-Corbyn do a Brexit deal?

Talks between the government and opposition Labour Party are set for a crunch meeting today and the stakes couldn't be higher. Theresa May's Brexit offer takes the shape of a customs union-style arrangement lasting until 2022, the time of the U.K.'s next scheduled general election. Labour could then offer the electorate a full customs union while a future Tory administration could pursue a looser relationship that lets Britain strike trade deals with other countries. Failure to agree would boost the chances of another referendum or even an emergency general election.

Health check for the eurozone

Given that trade worries are back in view, the health of Europe's economy is again in focus. German industrial orders rose less than expected in March after two months of steep declines, bringing little relief for Europe's largest economy which is facing a sharp slowdown in growth. Contracts for "Made in Germany" goods were up 0.6%, figures from the Federal Statistics Office showed, undershooting a consensus forecast of 1.5%.

Picks from the Sohn Investment Conference

While Apple (NASDAQ:AAPL) often refrains from announcing deals with smaller firms, CEO Tim Cook told CNBC that the tech giant buys a company every two to three weeks on average. In fact, in roughly the last six months alone, the iPhone maker scooped up approximately 20 to 25 businesses, "primarily looking for talent and intellectual property." The aggressive acquisition style highlights Apple's massive purchasing power with $225.4B in cash on hand, making it one of the most cash-rich companies in the world.

With spending on pets in the U.S. estimated to exceed $75.3B this year, Walmart (NYSE:WMT) aims to have 100 veterinary clinics open in its stores within the next 12 months, growing from the 21 it has today. The retailer is also for the first time launching an online pet pharmacy, WalmartPetRX.com, rivaling Chewy.com. Walmart has seen a roughly 60% increase in the number of dog- and cat-related health-care items sold on its website over the past year, according to a company spokeswoman.

Amazon (NASDAQ:AMZN) is opening up its twelfth cashier-less convenience store in the U.S. at Brookfield Place in downtown Manhattan. It's the first outlet to make it to New York, with most of the others blanketing the West Coast. Amazon will start accepting cash at its new 1,300-square-foot location, having faced backlash from people who say its cashier-free stores are discriminatory toward the unbanked. As many as 3,000 Amazon Go stores may open by 2021, according to several media reports.

Anadarko Petroleum (NYSE:APC) has declared Occidental Petroleum's (NYSE:OXY) sweetened $38B takeover a "superior proposal," giving Chevron (NYSE:CVX) four days to either boost its offer or walk away from the oil industry’s biggest deal in at least four years. The announcement by Anadarko, which had rebuffed several prior bids from Occidental, comes almost a month after it agreed to be purchased by Chevron for $33B. Chevron has so far refused to increase its offer, saying its proposal is a better long-term option for Anadarko shareholders.