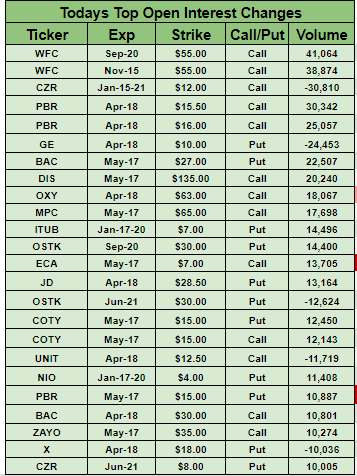 Dow futures are up 100 points, with the S&P 500 and Nasdaq pointing to gains of 0.4% as investors await the latest batch of earnings, including reports from UnitedHealth (NYSE:UNH), Johnson and Johnson (NYSE:JNJ), IBM (NYSE:IBM) and Netflix (NASDAQ:NFLX). A notable standout from the overnight session was the Shanghai Composite, which jumped 2.4% on the latest trade optimism. Larry Kudlow, director of the National Economic Council, said negotiations over complaints that China has predatory technology policies were going "very well" and making good progress.

As the U.S. and China look to wrap up trade talks, European negotiators have received the green light to start trade negotiations with the U.S. after threatening each other with billions of dollars in new tariffs over an aviation dispute. The EU is trying to do its own limited deal with President Trump to address tariffs on industrial goods, in part to avoid levies he has threatened on foreign automobiles and car parts. Japan this week also steps into bilateral U.S. trade talks as Shinzo Abe aims to avoid tariffs or quotas on auto exports and Trump attempts to crack open Japan's agricultural market and reduce a $60B trade deficit.

Four of the six largest American banks delivered a mixed bag of first-quarter financial results this past week - but that's probably the sector's best this year, especially if the Fed does not increase interest rates, according to Citigroup. "When we look at profitability, particularly net interest margins... we think we're at peak margins right now, we think this is as good as it gets both in terms of net interest margins and profitability." Among them, JPMorgan (NYSE:JPM) and Wells Fargo (NYSE:WFC) reported quarterly profit and revenue that exceeded analysts' expectations, while Goldman Sachs (NYSE:GS) and Citigroup (NYSE:C) both missed estimates on their revenue. The bank earnings merry-go-round continues later today with results from Bank of America (NYSE:BAC).

Will the FAANG rally continue?

While the FAANGs have already seen double-digit gains so far this year, Barclays expects the rally to continue for at least three of the five companies, with their upcoming quarterly results seen as the primary positive catalyst. The firm "would add to positions" in both Facebook (NASDAQ:FB) - following its 2018 controversies - and Alphabet (GOOG, GOOGL), which could benefit from improving margins. Barclays also recommended "taking advantage and adding selectively" to Amazon (NASDAQ:AMZN) before the e-commerce company's print.

Fed should target an inflation range

The Fed should shore up its ability to fight economic downturns by committing to let inflation run above 2% "in good times," according to Boston Fed President Eric Rosengren. "My own preference would be an inflation range of 1.5%-2.5%" because hitting the current target will only get harder with rates as low as they are, he said at Davidson College in North Carolina. "Even though we're only missing by a little bit it actually does matter if you miss by a little bit on a regular basis."

Congressional investigators have subpoenaed Deutsche Bank (NYSE:DB) as Democrats step up their probes into President Trump and his longtime lender. The subpoenas from the U.S. House of Representatives Intelligence and Financial Services committees mark an escalation of Democratic-led probes into Trump's business dealings. The committees also subpoenaed multiple other financial institutions, including JPMorgan (JPM), Bank of America (BAC) and Citigroup (C) as part of their investigations.

Hulu has repurchased AT&T's (NYSE:T) 9.5% stake in the business for $1.43B, giving the streaming company a valuation of $15B (up from $9.26B in November). The transaction indicates that Hulu - which is now owned at two-thirds by Disney (NYSE:DIS) and one-third Comcast (NASDAQ:CMCSA) - continues to gain popularity, even as the market for over-the-top content becomes increasingly crowded. AT&T said it will use proceeds of the transaction to reduce its massive debt pile.

President Trump urged Boeing (NYSE:BA) on Monday to "rebrand" its 737 MAX jetliner following two fatal crashes, but the planemaker said it was focused on fixing the problem and brainstorming over next steps to win back public trust. Asked about Trump's advice, a Boeing spokesman said rebuilding public trust was their focus, with pilots playing a pivotal role. Meanwhile, United Airlines (NASDAQ:UAL) has canceled all 737 Max flights through early July, while American Airlines (NASDAQ:AAL) is reportedly adding more simulator training for 737 MAX pilots.

Apple (NASDAQ:AAPL) is reportedly spending $500M on games for Arcade.

U.S. to press allies to keep Huawei out of 5G at Prague summit.

SpaceX (SPACE) is raising $510M amid questions about the viability of Starlink.

'Why Netflix Has A 'Game Of Thrones' Problem' writes contributor The Entertainment Oracle.