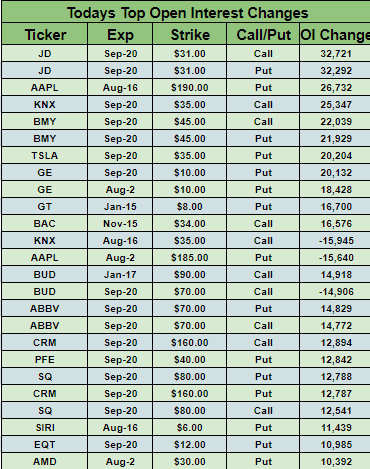 Shares of Capital One are off 3% premarket after a data breach exposed 140K Social Security numbers of its credit card customers, around 80K bank account records and 1M Canadian Social Insurance numbers. Additional information including names, addresses, phone numbers, credit scores and credit limits were also exposed, although credit card account numbers and log-in credentials were not taken. The suspect? Paige A. Thompson, a former employee of Amazon Web Services (NASDAQ:AMZN), where the bank had stored its customer data. Capital One (NYSE:COF) estimates the hack will cost the company approximately $100M-$150M in 2019.

Trade negotiations shift to Shanghai today, with stock market investors sensitive to fallout from the year-long conflict and any signs that it could escalate. U.S. equity futures are suggesting modest declines on Wall Street ahead of the open, with contracts tied to the DJIA down 50 points, as Steven Mnuchin and Robert Lighthizer meet with China's Vice Premier Liu He. Traders are also keeping a cautious stance on risk as the Fed kicks off its two-day policy meeting in Washington, as well as another heavy slate of corporate earnings, highlighted by Apple's (NASDAQ:AAPL) third quarter report after the market close.
Go deeper: Fundamental Capital sees choppy stock market trading ahead.

Borrowing by the federal government is set to top $1T for the second year in a row as the Treasury expects to issue $814B in net marketable debt in the second half of this calendar year, bringing total debt issuance to $1.23T in 2019. That would represent a slight decline from borrowing in 2018, when the Treasury issued $1.34T in debt, but more than twice as much as the $546B it issued in 2017. Low borrowing costs, meanwhile, suggest that markets remain unfazed by all the red ink. While government debt has soared since the financial crisis, 10-year Treasury yields have fallen to near 2% from more than 5% in 2006, holding down government interest payments.

The British pound came under continued assault overnight, sliding 0.8%against the dollar to 1.2119 as traders priced in an increased possibility of a so-called hard Brexit. News that Boris Johnson won't meet EU leaders unless they are willing to abandon the Irish "backstop" agreed to with former Prime Minister Theresa May sent sterling down 1.3% on Monday. The Bank of England could put yet further pressure on the currency when it makes its rate decision this week.

To Infinity and Beyond?

Beyond Meat (NASDAQ:BYND) shares tumbled 11% AH on Monday amid plans for another stock offering (to boost production) just three months after its IPO, while demand for its plant-based burgers and sausages prompted an increase in its full-year sales forecast. "For another growth stock, the top-line beat and raises would be enough to see a post-market rally, but there are a lot of Beyond Meat investors out there looking for any excuse to sell a stock that has rocketed so much since its IPO," said Kamal Khan, an analyst at Investing.com.
Go deeper: BYND growth statistics.

Looking to lower healthcare costs, the Trump administration is proposing a rule that would require hospitals that accept Medicare to publish prices that are negotiated with insurers or risk being fined up to $300 a day. Hospitals and insurers are certain to fight the proposed rule. These companies have already criticized Trump’s executive order requiring hospitals and insurers to disclose negotiated rates for services, saying transparency could actually increase prices.
Go deeper: Related tickers may include CYH, THC, LPNT, UHS, QHC, SEM, HUM, HCA, EVHC, SSY.

Citigroup (NYSE:C) is preparing to cut hundreds of jobs from its trading division, a worrying sign for banks that the industry-wide slump in revenue this year may be more permanent than previously thought. Specifically, Citi is looking to cut the jobs in its fixed-income and stock-trading operations over the course of 2019, including trimming about 10% of its equities division. It's not a total surprise, however, as this has been the worst first half for Wall Street trading desks in a decade.
Go deeper: The Sell Side has Citi at Outperform, but the stock's Quant Rating is Neutral.

A number of factors could prevent Facebook's (NASDAQ:FB) cryptocurrency from seeing the light of day, the tech giant reminded investors in its latest quarterly report. "Libra has drawn significant scrutiny from governments and regulators and we do not have significant prior experience with digital currency or blockchain technology," Facebook said in an SEC filing. "As such, there can be no assurance that Libra or our associated products and services will be made available in a timely manner, or at all."