Last summer $TSLA was trading for $27 a share, just inching along with not much fan fare. The only oddity about the stock was the massive bets being made for downside. Over 29 million shares were short back then, meaning a lot of traders didn't think $TSLA was even worth $27 a share. They thought the stock was going to crumble. Wow, where they ever wrong. Today the stock sits at all time highs, trading over $160 this past Friday for the first time. The stock is up 471% since last August, a massive move that has made $TSLA one of the hottest stocks today. While some of the shorts have thrown in the towel months ago, over 19 million shares remain in the hands of short sellers: 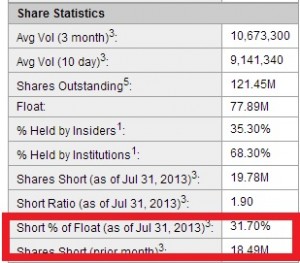 The shorts might be right long term. $TSLA will come back to earth, but back to earth might be $250 after the stock peaks at $600. Would you want to be short when your losses remain UNLIMITED on a stock that continues to show no signs of slowing down? Eventually we will find out which shorts are the ones with deep pockets and which ones are using monopoly money.

To me the scary part for the shorts is that over 19 million shares remain short, that's over 30% of the float. That figure was released just 2 weeks ago. The stock continues to see people shorting the stock on a daily basis as well. As the price continues to rise, continues to defy all the breathtaking statistical logic that the shorts have laid out, the shorts will be scrambling to recover what little remains from their initial shorting activities.

When $TSLA tops, and it will at some point, the stock will make for a great shorting opportunity. A sign to look for when $TSLA tops will be everyone calling for more gains and no one calling for a top. Right now we have way too many top callers. Everyone wants to be the first to call the top, yet doesn't look at the over all trend. The trend is up, why fight it? Why!!! Of all the numbers you can throw out stating why $TSLA is overvalued, any smart investor knows the trend is your friend. Do not fight the trend! Those calling for a top in $TSLA are awful traders - anyone shorting this stock is down substantially on their investment.

The same shorts that were betting for downside at $27 are telling you the stock is massively over valued now at $160. Amazing isn't it? How long can you be wrong? Watch them puff their chests out the one day $TSLA does indeed hit its top.

If we've learned anything the last 5 years, these heavily shorted momentum stocks can go much higher, and much farther than anyone believes it will. This why $TSLA will trade well over $200 this year. The shorts have been wrong for over 470% since last summer... whats another 100% from here.

My video on $TSLA a few weeks ago
http://stks.co/jfn0 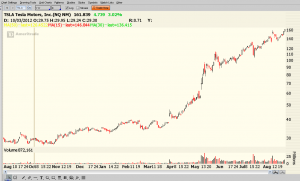