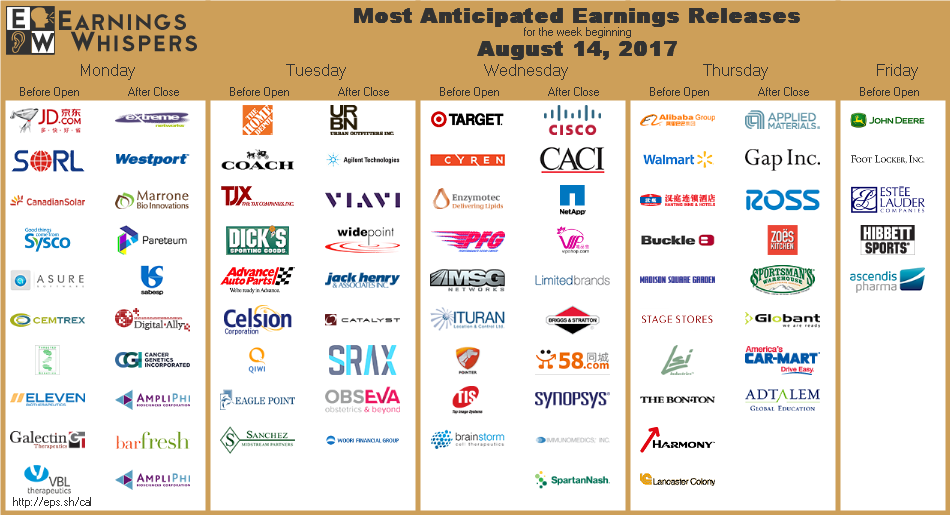 The ECB is ready to publish the minutes of its July meeting, with investors watching for any clues about how it plans to unwind its QE program. It follows reports suggesting Mario Draghi won't deliver a fresh policy message in Jackson Hole later this month. Minutes of the Fed's July meeting yesterday showed policymakers divided over the timeline for future rate hikes, as some appeared wary about weak inflation, while others were eager to get on with normalization. Euro -0.6% to 1.1699.

Two of President Trump's business advisory groups, the American Manufacturing Council and Strategic and Policy Forum, have imploded as CEOs resigned over his response to the violent weekend rally in Charlottesville. But another White House initiative, The American Technology Council, remains intact. Although the unit is only made up of government employees, leaders from the private industry have attended meetings in the past.

"I want to be clear, [President Trump] is not interested in a mere tweaking of a few provisions and a couple of updated chapters," U.S. Trade Representative Robert Lighthizer said as discussions began to amend NAFTA. "We need to assure that the huge deficits do not continue, and we have balance and reciprocity... NAFTA has fundamentally failed many, many Americans and needs major improvement."

The federal government will make crucial Obamacare-related subsidy payments to health insurers in August, according to a White House spokesman, despite threats by President Trump to end them. The decision came a day after the Congressional Budget Office warned that Obamacare premiums would soar an additional 20% above projected price increases if the payments are ended in 2018.

"We're at economic war with China," White House Chief Strategist Steve Bannon argued in an interview with The American Prospect, asserting that the U.S. has "to be maniacally focused on that." "If we continue to lose it, we're five years away, I think, ten years at the most, of hitting an inflection point from which we'll never be able to recover."

Meanwhile, Chinese takeovers of U.S. companies have plunged this year. According to Dealogic, Chinese dealmaking slid 65% in 2017 as of early August, following a peak of $65.2B last year, which included HNA's acquisition of Hilton Worldwide (NYSE:HLT). The drop comes as the Trump administration initiates an investigation into Chinese trade practices, as well as tough business and trade rhetoric aimed at Beijing.

The Pentagon's top general Joseph Dunford is encouraged by commitments to enforce sanctions against North Korea, however, no one thinks "economic pressure alone" can result in denuclearization. The U.S. should also not dial back on military exercises, he declared, but stated that military action would be "horrific" and would have to be taken in consultation with U.S. allies.

The next phase of Brexit talks are likely to be delayed by two months until December, Sky News reported overnight, leaving only a little over a year until the Article 50 timetable is used up. "Government officials are working at pace and we are confident we will have made sufficient progress by October to advance the talks to the next phase," a spokeswoman for the Department for Exiting the EU said in a statement.

In a speech on Wednesday, Attorney General Jeff Sessions slammed Chicago, quoting murder and shooting rates as an example of how sanctuary policies show "respect for the rule of law has broken down." Chicago Mayor Rahm Emanuel's administration sued Sessions' DOJ earlier this month in response to its plan to cut federal funds from sanctuary cities. San Francisco and California have filed similar complaints.

The unemployment rate among young Americans - 16 to 24 years old - fell this summer to 9.6%, from 11.5% a year earlier, to match the lowest level since 1969. But the historically low rate comes with a big caveat: A far smaller share of the demographic is seeking summer jobs than in decades past, with the labor force participation rate edging up to 60.6%, from 60.1% in 2016.

The wave of internet crackdowns against white nationalists and neo-Nazis reflects a rapidly changing mindset among Silicon Valley firms on how far they are willing to go to police hate speech. In response to Charlottesville, Twitter (NYSE:TWTR), LinkedIn (NASDAQ:MSFT), Spotify (Private:MUSIC) and Cloudflare (Private:FLARE) have joined Facebook (NASDAQ:FB), Alphabet (GOOG, GOOGL) and GoDaddy (NYSE:GDDY) in cutting off their services to hate groups and extremist material.

A number of HBO social media accounts were hacked late Wednesday, adding to the pile of security issues plaguing the company following recent leaks around key shows like Game of Thrones. At around 11 p.m. ET, the Time Warner-owned (NYSE:TWX) cable network's Twitter account was taken over by a group called OurMine. The same hackers also compromised the main @HBO and @GameOfThrones accounts.

Putting its gloves in the ring, Sling TV (NASDAQ:DISH) has joined the pay-per-view circle for the upcoming Floyd Mayweather-Conor McGregor fight. It will offer the match to its customers for $99.99 before taxes and is already taking preorders for the Aug. 26 contest. The fight, produced by Showtime Sports (NYSE:CBS) and UFC, is expected by many to be the highest-grossing pay-per-view event ever.

President Trump briefly wiped around $5.7B off the stock market valuation of Amazon (NASDAQ:AMZN) on Wednesday with a tweet attacking the online retail giant for "doing great damage to tax paying retailers." Shares regained their lost value after markets opened in New York, trading up 0.3% by lunchtime, but closed the day slightly in the red. "Towns, cities and states throughout the U.S. are being hurt – many jobs being lost!" he declared.

A new Nokia phone is expected to go on sale within just a few weeks, likely just ahead of higher-profile launches from Samsung (OTC:SSNLF) and Apple (NASDAQ:AAPL). The Android-running Nokia 8, made by licensee HMD Global, will cost €599 and begin selling in early September. It will be the ninth device made by HMD Global since its agreement with Nokia (NYSE:NOK) just eight months ago.

The energy unit of Berkshire Hathaway is "standing firm" on its $9B offer to acquire 80% of the Oncor Electric Delivery Company and will not increase its offer. Elliott Management, the largest creditor of Oncor's bankrupt parent, has tried to best Berkshire's (BRK.A, BRK.B) bid for the Texas utility with a $9.3B proposal. Including debt, Elliott's offer values Oncor at $18.5B vs. Berkshire's $18.1B valuation.

Topping a bid from H&E Equipment Services, United Rentals (NYSE:URI) has agreed to acquire Neff Corp. (NYSE:NEFF) for $25 per share in cash, representing a total purchase price of approximately $1.3B. The transaction is expected to be immediately accretive to cash EPS and free cash flow. Termination fee? United will also make a $13.2M payment to H&E (NASDAQ:HEES) on behalf of Neff.

Shares in Fiat Chrysler have risen in recent days on reports that major automotive players in China have explored offers for the carmaker. However, two of the biggest names, Geely (OTCPK:GELYY) and Dongfeng (OTCPK:DNFGY), said they are not planning to make a bid. Others that may be interested include Great Wall Motors (OTCPK:GWLLY), Zhejiang Geely Holding Group and Guangzhou Automobile Group (OTCPK:GNZUY). FCAU -0.8%premarket.

The Wisconsin State Assembly will consider a $3B incentive package today for a proposed LCD factory by Foxconn (OTC:FXCOF). It will be the first vote on the deal by a chamber of the state's Republican-controlled legislature. Proponents have touted the project's investment potential and job creation, but critics have attacked the plan as corporate welfare and potentially harmful to the environment.