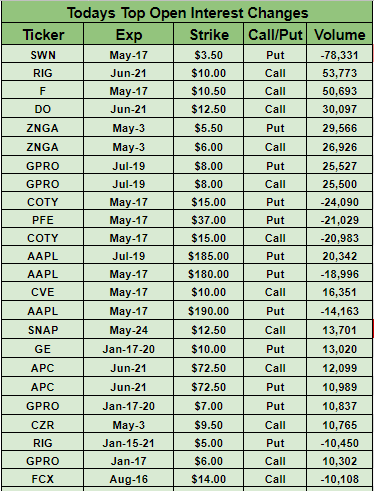 Vegan burger maker Beyond Meat has priced its initial public stock offering at $25 per share, the top of its anticipated range in a reflection of brisk investor demand. At this price, the company raised around $240M at a $1.5B valuation, including underwriters' options. The company starts trading today on the Nasdaq under symbol "BYND" as consumers increasingly opt to eat less meat or turn to vegan or vegetarian foods. Beyond Meat will use the proceeds from its IPO to invest in new manufacturing facilities and R&D, stepping up competition with rival Impossible Foods.

For all the political pressure to ease policy and the mixed signals on growth and inflation, the Fed refused to signal anything other than that it was still on pause, while Chair Jerome Powell said the factors dragging on inflation might be "transitory," not "persistent." That cooled over-excited U.S. shares on Wednesday, snapping the S&P 500's three-day winning streak and dragging down Wall Street. U.S. futures this morning are turning higher once again - with the DJIA up 59 points - as the focus shifts to the next round of corporate earnings as well as economic data on U.S. jobless claims and factory orders.

Apple's (NASDAQ:AAPL) better-than-expected report on Tuesday evening was in contrast to a lackluster quarterly sales forecast last night from semiconductor giant Qualcomm (NASDAQ:QCOM). "You're going to see Chinese weakness reflected in the next couple of quarters," CEO Steve Mollenkopf declared, sending shares down 3.5% AH, although Qualcomm also said it expects to receive $4.5B-$4.7B from its royalty settlement with Apple (AAPL). Ssince the deal on April 16, the chipmaker's stock is up over 43%.

Facebook (NASDAQ:FB) and the FTC are negotiating a potential settlement that would create new serious privacy practices and roles along with an expected multibillion-dollar fine, Politico reports. But the current plan doesn't have new restrictions on the company's data handling, nor does it call for any checks on CEO Mark Zuckerberg himself, nor his removal as chairman. Facebook's earnings report last week was marked by a legal expense charge of $3B it took on in anticipation of an FTC fine and it's provided for that sum to rise to $5B.

U.S. waivers on purchasing Iranian oil expired overnight for eight countries, including Iran's main oil customer, China. Speaking at an oil conference in Tehran, OPEC secretary-general Mohammed Barkindo said his group is working to "depoliticize oil" and "insulate our organization against geopolitics," but didn't directly address the U.S. sanctions. Some Iranian and U.S. officials project that the country's exports might fall as low as 400K barrels a month by this summer (before the U.S. exit from the nuclear deal, Iran exported 2.5M barrels a day).

Policymakers at the Bank of England are set to keep rates on hold this morning, but may adopt a more hawkish tone aimed at preparing financial markets for the possibility of a hike this year. It'll be the first meeting since the U.K. and EU agreed to kick the Brexit can down the road until jack-o'-lanterns come out in October. Meanwhile, Theresa May faces big losses in local elections today as voters register a protest against the prime minister's handling of Brexit.

Royal Dutch Shell (NYSE:RDS.A) rose nearly 3% premarket after reporting a 2% fall in Q1 profits to $5.43B, but easily beat expectations as lower oil prices and refining earnings were offset by stronger trading and higher LNG prices. Shell also announced the latest tranche of its $25B buyback program, which it had promised after its BG Group deal. The share repurchases, which were launched in July 2018, will amount to nearly $2.8B in the coming quarter.

Merck (NYSE:MRK), the sole U.S. supplier of measles vaccines, has increased output to meet an uptick in U.S. demand amid the country's biggest outbreak in 25 years. "The demand side of the equation hasn't been outstripping our underlying capacity," Chief Marketing Officer Mike Nally said in an interview. The CDC reported 704 cases of measles as of April 26, a 1.3% increase since the 695 reported the week before, with the vast majority of cases occurring in children who have not received the MMR vaccine.

The EU will seek a sharp increase of LNG imports from the U.S.

Pork is the next target of a widening spat between China and Canada.