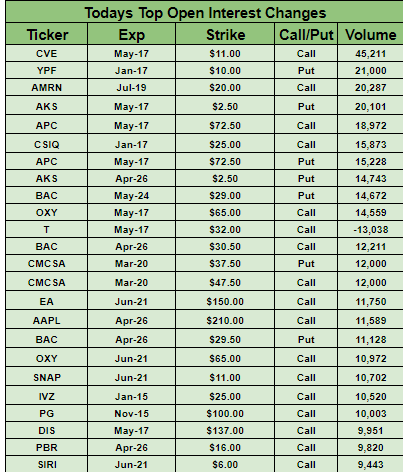 U.S. stock futures are flat as investors head into another powerhouse day of earnings reports, including updates from Amazon (NASDAQ:AMZN), Intel (NASDAQ:INTC), Starbucks (NASDAQ:SBUX), Ford (NYSE:F), Comcast (NASDAQ:CMCSA), UPS (NYSE:UPS), AbbVie (NYSE:ABBV) and Altria (NYSE:MO). Across the globe, concerns over Beijing pulling back on stimulus measures sent the Shanghai Composite Index down 2.4% to a three-week low, while Hong Kong’s Hang Seng Index fell 0.8%. Japan's Nikkei closed with 0.5% gain ahead of escalating Japan-U.S. trade talks. In Europe, the Stoxx Europe 600 Index is down 0.2%.

The Bank of Japan left policy unchanged, as most economists expected, maintaining its policy balance rate at -0.1% and guiding to keep extremely low interest rates until at least spring 2020. That's putting a date to policy guidance it had previously just said it would keep for an "extended period." The BOJ's target for the 10-year government bond yield is zero, and for the first time the bank projected economic growth for the year ending March 2022 (it expects 1.2% growth then). It sees core CPI rising at 1.6% in fiscal 2021; time's running out for Gov. Haruhiko Kuroda to hit a 2% inflation rate before his term expires in 2023.

Merger talks between Deutsche Bank (NYSE:DB) and German rival Commerzbank (OTCPK:CRZBF) have collapsed, according to CNBC. A source indicates that the general feeling is a merger is not a great idea, since Commerzbank doesn't have the same amount of credibility on the Street as Deutsche Bank does with clients. Analysts have been questioning the level of synergies between the two banks. Shares of Deutsche Bank are up 2.12% in premarket action.

Strong earnings reports from Microsoft (NASDAQ:MSFT) and Facebook (NASDAQ:FB) have set up the tech sector for a strong day. "With Facebook, investors had concerns about pressure from U.S. and EU regulators, which hasn’t come to pass, and privacy concerns haven't slowed growth especially in emerging markets," stated Pacific Life Fund Advisors' Max Gokhman. "With Microsoft, Azure has really been supporting them. The broader takeaway for tech is that so long as business and consumer sentiment holds up there’ll be continual growth for them," he noted. Microsoft is up 3.59% in premarket trading and is flirting with the $1T market cap mark, while Facebook is 7.05% higher. The Invesco QQQ ETF (NASDAQ:QQQ) is up 0.75% in the early session.

Intel (INTC) isn't taking the foot off the gas of its autonomous vehicle project, despite laying off several dozen employees at a Silicon Valley research lab. The cuts were part of an efficiency move as Intel begins centralizing more of its autonomous activities in Mobileye's home nation of Israel. The Information reported Intel's Mobileye unit acquired Eonite Perception late last year. Eonite is described as a Palo Alto-based startup specialized in software for 3D mapping and tracking using lidar.

The U.S. Census Bureau is scheduled to release the March Durable Goods Order report later today. Economists expect a 0.7% gain in durable goods for the month in a turnaround from the 1.6% drop recorded in February. Durable goods are anticipated to be up 0.1% when defense orders are stripped out and 0.2% higher when transportation orders are backed out.

Slack (SLACK) plans to make public its prospectus for a direct listing on the stock market as soon as this week, the Wall Street Journal reports. The messaging platform submitted its filing to regulators confidentially in February. The document will show that the company is on track for about $500M in annual revenue this year and that it's unprofitable because it continues to spend money for growth, said a person familiar with the matter.

A unit in SoftBank's (OTCPK:SFTBY) domestic telecom is investing $125M in Project Loon, the effort from Alphabet (GOOG, GOOGL) to float networking equipment via balloons to provide Internet access. SoftBank's HAPSMobile has worked to beam Internet from drones to help underserved areas, and it's looking to collaborate and perhaps share technology with Google as they face off against rivals trying to bring Internet access from low-earth-orbit satellites.

Powerful brands such as State Farm, Disney (NYSE:DIS), Spotify (NYSE:SPOT), Toyota (TM), Mastercard (NYSE:MA), Hershey (NYSE:HSY), Sephora (OTCPK:LVMHF, OTCPK:LVMUY), Kellogg's (NYSE:K) Cheez-It and Wendy's (NASDAQ:WEN) are all turning to esports as a way to find consumers between 18 and 35 years old that may have already cut the cord to traditional TV. Early data from Nielsen has shown that brands backing esports have seen some benefit, even if they aren't naturally aligned with the growing form of entertainment. Last year, 39% of brand exposure in esports competitive broadcasts was from non-gaming related companies.