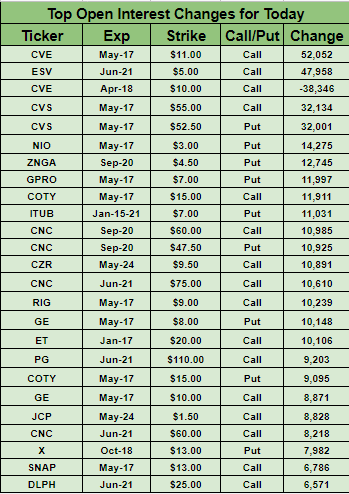 The timing of a U.S.-China trade agreement remains unclear, but the two countries have "pretty much agreed on an enforcement mechanism," U.S. Treasury Secretary Steve Mnuchin declared. While down earlier in the overnight session, Dow futures are now up 32 points as Wall Street sees some trade optimism following yesterday's release of Fed minutes, which reaffirmed the central bank's patience regarding future rate hikes. "If we can complete this agreement, this will be the most significant changes to the economic relationship between the U.S. and China in really the last 40 years," Mnuchin added, saying he has another call scheduled this morning with Chinese Vice Premier Liu He.

Brexit extended to Halloween... Time's up for May?

Theresa May managed to convince EU leaders yesterday to grant the U.K. more time before it leaves the bloc, extending the deadline to Oct. 31, but some experts are now saying her days in office are numbered. "A six-month period is clearly enough for the Conservative Party to contemplate a change in leadership while still allowing some time for the incoming PM to seek to negotiate with the EU," JPMorgan economist Malcolm Barr said in a research note. "One could even cram a general election into that time frame too if PM May were to resign by roughly the end of May."

Amazon listening to what you tell Alexa

It's not a surprise, but Bloomberg is reporting that Amazon (NASDAQ:AMZN) has thousands of workers around the world who listen to and review private Alexa conversations with the goal of helping improve the speech assistant’s technology. The recordings are transcribed, annotated and then fed back into the software as part of an effort to eliminate gaps in Alexa’s understanding of human speech and help it better respond to commands. Amazon has never publicly disclosed the role of the group or that human interference is part of Alexa’s voice technology.

"As far as 2019 is concerned, amongst the analyst community there is an extraordinarily wide divergence of view as to how strong growth will be," the IEA said in its closely-watched monthly report. "We maintain our forecast of 1.4M barrels per day, but accept that there are mixed signals about the health of the global economy, and differing views about the likely level of oil prices." Factors include surging U.S. crude stockpiles vs. OPEC-led supply cuts, Venezuela and Iran sanctions, and escalating fighting in Libya.

China's factory-gate inflation picked up for the first time in nine months in March, rising 0.4% from a year ago, amid signs that government efforts to boost the economy may be putting a floor under domestic demand. Consumer inflation also quickened, with the CPI climbing 2.3% from a year ago, adding to optimism that the world’s second-largest economy is starting to turn the corner. Analysts caution, however, that it will take a few more months of better data and further policy support from Beijing to see if a recovery can be sustained.

Millions of Indian voters are heading to the polls in the first phase of the world's largest general election that's seen as a referendum on Prime Minister Narendra Modi. The seven-phase elections will conclude on May 19, with the party or coalition with a simple majority (273 seats) invited to form a government. What's at stake? The country faces high unemployment, sharpening sectarian and caste divisions, distress for rural farmers and a recent flare-up with Pakistan.

Walmart (NYSE:WMT) is planning to refit another 500 of its U.S. stores this year, investing hundreds of millions of dollars to keep bricks and mortar retail relevant. "Brighter lighting, wider aisles and self checkouts are to be rolled out under the plan, as well as upgrades to electronics and pharmacy departments, FT reports. Walmart's once-rapid store opening rate has slowed to a crawl, with only five new stores planned this year. "

Tesla (NASDAQ:TSLA) and Panasonic (OTCPK:PCRFY) are suspending plans to expand the capacity of their $4.5B U.S. plant in the face of uncertain demand for electric vehicles, the Nikkei reports. The two had intended to raise capacity 50% by 2020 to the equivalent of 54 gigawatt-hours, but financial problems forced a re-think. Panasonic also intends to suspend planned investment in Tesla's battery and EV plant in Shanghai, and instead provide technical support and a small number of batteries from the existing Gigafactory. TSLA -4%premarket.

Lyft shares at new low ahead of Uber IPO

The rivalry between ride-sharing apps has breached a new level of intensity as Uber (UBER) prepares to publish paperwork for an initial public offering that could value it at $100B. Newly-listed Lyft's (NASDAQ:LYFT) shares plunged nearly 11% yesterday, closing at $60.12, more than 16% lower than its IPO price of $72 on March 28. Uber is expected to make public its IPO prospectus today, giving investors the opportunity to closely judge the two companies side by side.

'Is The Last Call Bell About To Toll For Tesla?' writes contributor Renegade Investment Research.

U.S. budget deficit running 15% higher than a year ago.

Brazil poised to charge Vale (NYSE:VALE) over deadly mine collapse.

IBM (NYSE:IBM) and Oracle (NYSE:ORCL) out of the running for $10B government cloud contract.