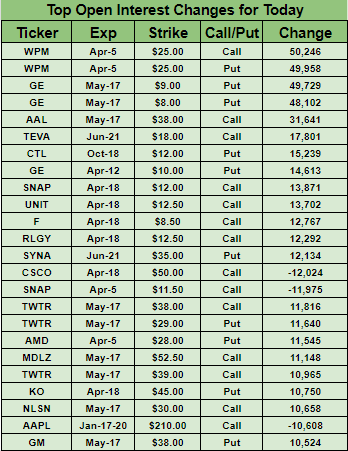 The first official report into the Ethiopian Airlines 737 Max crash is out, but it doesn't explicitly mention Boeing's (NYSE:BA) anti-stall MCAS software. "[Pilots] followed the Boeing recommended and FAA approved emergency procedures to handle the most difficult emergency situation but couldn't recover the airplane from the persistence of nose diving," according to Ethiopia's transport ministry, which recommended two proposals. "The aircraft flight control system shall be reviewed by the manufacturer... and aviation authorities should ensure that this is adequately addressed." Yesterday, Boeing said its new 737 MAX software test was a success, while the FAA created an international task force to review the aircraft.

U.S. stock index futures are down 0.1% ahead of the open amid a lack of fresh impetus in the ongoing U.S.-China trade talks. President Trump will meet with Chinese Vice Premier Liu He later today as reports indicate the U.S. will keep punitive tariffs on China to ensure it keeps up its side of any potential trade agreement. Troubling news out of the Europe also suggests that EU ambassadors are putting off giving the green light for trade talks with the U.S. as France continues to withhold its consent.

In another nail-biting vote, MPs voted for the draft legislation on Wednesday evening to prevent a no-deal exit on April 12 (the date of a new deadline granted by the EU) by 313 votes to 312. The bill will need to be approved by the upper house of parliament, the House of Lords, to become law. It's still far from certain that the EU will grant the U.K. an extension when European leaders meet next Wednesday - at an emergency summit dedicated to Brexit - meaning there is more political and economic uncertainty ahead.

Tesla (NASDAQ:TSLA) -7.1% premarket after the EV maker reported a 31% drop in Q1 deliveries to 63K vehicles (51K Model 3 and 12K Model S and X). While sales were hit by a reduction in U.S. federal tax credits and by difficulties in delivering to Europe and China, Tesla said it finished the quarter with "sufficient" cash. The automaker also reaffirmed its full-year forecast of 360K to 400K deliveries, but investors are asking if that big increase will be possible.

Arguments are scheduled in SEC vs. Musk

Lawyers for Elon Musk and the SEC will square off in a Manhattan courtroom today over whether he should be held in contempt over one of his tweets, which - under a previous settlement - did not get advance approval from Tesla (TSLA). The high-profile saga has raised investor worries that it could lead to restrictions on Musk's activities or even his removal from Tesla's board or as CEO, while distracting him at a pivotal point for the electric automaker.

Japanese prosecutors have rearrested ousted Nissan (OTCPK:NSANY) Chairman Carlos Ghosn in a stunning twist that media reports linked to payments to an Omani dealer. "My arrest this morning is outrageous and arbitrary," he said in a statement. "It's part of another attempt by some individuals at Nissan to silence me by misleading the prosecutors." Ghosn was previously released on bail after spending more than 100 days in a Japanese prison.

5G era for smartphones has begun

It's unclear which country struck first, but Verizon (NYSE:VZ) has launched 5G wireless service in parts of Chicago and Minneapolis, while carriers in South Korea - SK Telecom (NYSE:SKM) and KT Corp. (NYSE:KT) - deployed their service in the Seoul metropolitan area. To access the network, Verizon subscribers for now will be limited to the Motorola Z3 (with an accessory clip-on), while Korean early adopters will have to use Samsung's Galaxy S10. 4G helped reshape the way people hail taxis and order takeout and the mobile industry is hoping the faster speeds provided by 5G will enable self-driving cars, smart cities and will birth immersive digital worlds.

PG&E Corp. (NYSE:PCG) has officially named Bill Johnson, head of the Tennessee Valley Authority, as its new President and CEO. The utility also appointed 10 new directors to its board as it remains under heavy scrutiny amid wildfire lawsuits and as the company pushes through Chapter 11 bankruptcy. The news comes a day after a federal judge said PG&E must use funds to help prevent future blazes before it pays any more dividends to shareholders.

Commerzbank (OTCPK:CRZBY) shares rose 3.5% in Frankfurt following a FTreport that UniCredit (OTCPK:UNCFY) stands ready to make a rival bid for the bank if merger talks with fellow German lender Deutsche Bank (NYSE:DB) fail. A sizable stake in Commerzbank would be combined with German Unicredit subsidiary HypoVereinsbank, with the entity being based in Germany. Commerzbank's executive board is reportedly set to decide whether to intensify discussions with Deutsche Bank - or back away from a deal - on April 9.

Tradeweb Markets is set to begin trading on the Nasdaq today under ticker symbol "TW." The online bond-trading platform priced shares at $27 apiece (above the marketed range), raising $1.1B and valuing the company at $6B. In contrast to the lineup of 2019 IPO candidates, however, Tradeweb is already profitable. The company is controlled by private-equity firm Blackstone (NYSE:BX), which acquired it last year as part of the takeover of Thomson Reuters' financial-data business.

'How Buffett's Delta (NYSE:DAL) purchases may fit the ideal model for a Berkshire (BRK.A, BRK.B) acquisition' by contributor Jim Sloan.

Tencent (OTCPK:TCEHY) issues $6B in bonds in Asia's biggest sale this year.

Victory for Netflix (NASDAQ:NFLX) shareholders on the board nomination process.

Ahead of this morning's earnings report, Constellation Brands (NYSE:STZ) reaches $1.7B wine and spirits deal.

Walmart (NYSE:WMT) shoots for market share left behind by Babies 'R' Us liquidation.