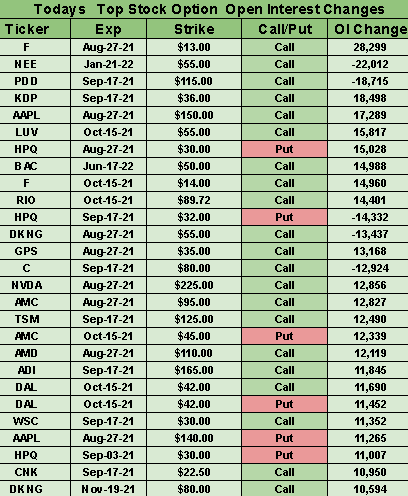 Stocks notched another round of fresh highs on Wednesday, before taking a breather in the overnight session. Meanwhile, U.S. equity futures are staying close to the flatline this morning as the highly anticipated Fed economic symposium kicks off in Jackson Hole. Central bankers could provide some clarity on the latest monetary policy at the event, with Fed Chair Jerome Powell slated to make remarks on Friday.

Quote: "It is one of the seminal moments each year where everybody is watching," said Mark Spindel, chief investment officer at Potomac River Capital. "There are no immaculate tightenings and now that they've admitted they are talking about tapering, they should refine that talk and give us some insight on what they are going to do." Other discussions may surround the "transitory" effects of inflation, the timetable of interest rates, as well as what impact Delta or other future variants will have on monetary policy.

Interestingly enough, the annual conference was supposed to take place physically in Jackson Hole this year, before the Kansas City Fed's abrupt decision last week to move the gathering online. That'll make it a solely virtual affair for the second year in a row. The dramatic U-turn highlights a delicate balancing act for the Fed as it charts its way out of a period of extraordinary monetary support.

On today's economic calendar: The second reading of U.S. gross domestic product for Q2, measuring the country's economic growth, will be published at 8:30 a.m. ET. The latest jobless claims filed during the week ended August 21 will be released at the same time. Treasury yields are also holding steady before the latest auctions on $30B worth of 4-week bills, $30B of 8-week bills and $62B of 7-year notes.

New Zealand had been set to become the first developed country in the world to raise rates in the pandemic era (until one COVID-19 case grounded its decision), but that title has now gone to South Korea. The Asian nation raised its policy rate for the first time in almost three years on Thursday with a quarter-percentage-point hike to 0.75%. The Bank of Korea also pushed up its inflation projection to 2.1% from 1.8% previously, while the benchmark KOSPI stock index closed down 0.6% for the session.

Bigger picture: Raising rates is a calculated risk for South Korea's export-driven economy, which has strongly rebounded from last year's pandemic slump. The thought here is to start paring back on stimulus before debt bingeing prompts bigger problems like asset bubbles or new threats to the economy. "We've decided to put the focus on reducing financial imbalances, and as we raise the rate, we are embarking on a process of normalizing policy in line with the recovery," the BOK wrote in a statement.

Central banks across the globe are also laying the groundwork for transitioning away from crisis-era stimulus. The move by South Korea could give central bankers and market participants some food for thought before the Fed's annual symposium in Jackson Hole. Chair Jerome Powell delivers his keynote address tomorrow and is expected to signal the future direction of U.S. monetary policy.

Next steps for South Korea: "We won't be doing things in a hurry, but we also won't hold off," BOK Governor Lee Ju-yeol said at a news conference. "As for timing for the further hikes, we will consider how the COVID-19 situation plays out, and changes in the Fed's policy stance, which would have an important impact for us, as well as how the financial imbalances play out." (13 comments)

Where to Invest $100,000 Right Now According to Experts

Peggy and David Rockefeller’s art collection sold for $835.1M. Today, Jeff Bezos, Bill Gates, and Eric Schmidt are active art collectors. In fact, 66% of billionaire collectors allocate 10–30% of their portfolios to art. And, the total wealth held in art is set to explode by another $1 trillion by 2026.

Now you can allocate to this asset class with Masterworks.io, the first company to securitize iconic works by artists like Monet, Banksy, and Basquiat. Wall Street Breakfast Readers skip their waitlist*

Vaccine mandates are spreading across the U.S., especially after the FDA issued full approval of a jab from Pfizer-BioNTech (PFE, BNTX). The Pentagon on Wednesday even ordered military troops to begin vaccinating immediately and the measures against the unvaccinated are expanding even in the corporate sphere. While some firms have been strict in their requirements, others have taken a lighter tone, like denying fitness rooms, free coffee or other perks.

Levies are coming: As the more infectious Delta variant circulates nationwide, the airline known by the same name is taking a more punitive approach toward getting its staff inoculated. Starting Nov. 1, Delta Air Lines (DAL) will raise health insurance premiums for unvaccinated employees by $200 a month, in a move that is reminiscent of what some companies already do for smokers. Delta says the surcharges are to cover higher COVID costs, with the average hospital stay due to the virus costing the carrier $50,000 per person.

By the numbers: 75% of Delta's workforce is already vaccinated against the coronavirus, so it will be interesting to see if the policy has any effect on the 25%, or about 17,000 workers. A $200 drawdown per paycheck a month would result in an annual cost of $2,400 for that employee. (324 comments)

Shares of Western Digital (WDC) surged almost 8% on Wednesday following a report that the data-storage technology leader is close to merging with Japan's Kioxia Holdings in a deal that could be worth more than $20B. "People familiar with the matter" said that talks between the companies have heated up recently, according to the WSJ, and a deal could be finalized by the middle of September. Western Digital would finance the deal with its stock, while CEO David Goeckeler would stay on as boss of the combined business.

Snapshot: Kioxia is owned by private-equity firm Bain Capital. While the company's name might not be as well-known outside of Japan, it was once called Toshiba Memory and has a long track record in the semiconductor industry.

Western Digital's acquisition of Kioxia would be good for a commodity industry like NAND memory, according to Wedbush analyst Matthew Bryson, though there is no guarantee a deal of this size would get approved by all the necessary governmental regulators. "The combined entity would be about the same size as Samsung, and questions abound whether Japan will allow a foreign entity to purchase Kioxia."

Consolidation: The deal could further shake up the global chip industry, which has been hit by supply shocks from the pandemic and red hot demand for new smartphones, 5G expansions and a rise in work-from-home culture. Over the past few years, there's been a number of big M&A deals in the industry, including Analog Devices' (ADI) $20B purchase of Maxim Integrated Products, AMD's (NASDAQ:AMD) $35B acquisition of Xilinx (XLNX) and Nvidia's (NVDA) $40B buyout of Arm Holdings (ARMHF). Intel (NASDAQ:INTC) recently also made clear that it's interested in M&A and has explored purchasing GlobalFoundries. (36 comments)

COVID boosters likely to win regulatory nod for use at six months.

Risk of heart inflammation could be higher after COVID than post vaccination.

Apple (NASDAQ:AAPL): The tech giant with the $20B ad opportunity.