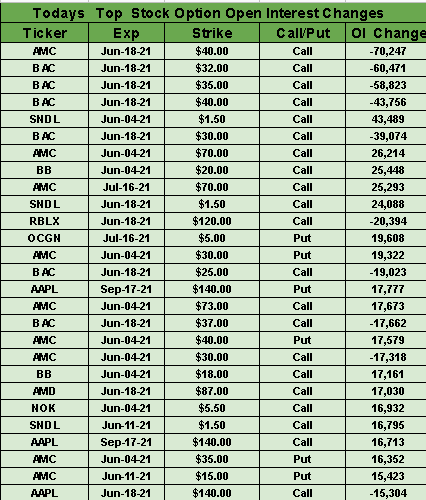 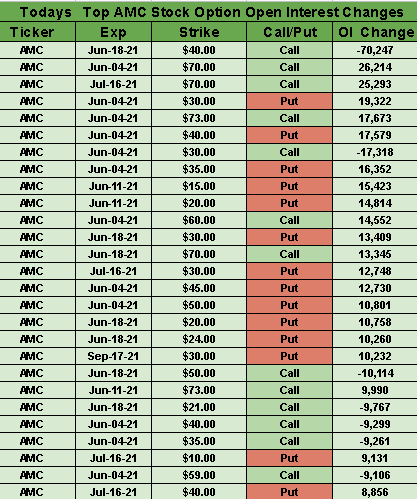 The meme trade has been resurfacing in recent weeks, but really picked up pace in the last few sessions, as retail favorite AMC Entertainment (NYSE:AMC) continues to make headlines. A 95% gain to $62/share on Wednesday - following four trading halts - left the movie theater chain with a market capitalization of $31.3B, making it more valuable than half of the companies in the S&P 500. That follows a 23% climb on Tuesday, a 200% advance in the last week and 3,600% return since the beginning of the year. For the record, the stock is up another 20% premarket to $75.

Diving deeper: Much of the price gains have been attributed to swarm trading, as well as gamification, where traders pile into popular names, ignoring fundamentals, technicals and other catalysts. We've seen the trend many times over the past year, ranging from the GameStop short squeeze frenzy (AMC was also involved then) to the Hertz (OTCPK:HTZGQ) bankruptcy bid-up and Kodak (KODK) craze that preceded it. Many Wall Street pros point out that these swarms only survive until the last "gambler" is left holding the bag, but these recent moves are also influencing real-world capital, as well as fresh ways for companies to trend in the markets.

Consider the fact that AMC CEO Adam Aron is embracing retail traders, rewarding his investor base yesterday with special screenings and free popcorn. Contrast that with ex-GameStop CEO George Sherman, who stayed largely quiet while his company's stock price soared in late January. Earlier this week, AMC also capitalized on its gains by raising $230M directly from creditor Mudrick Capital Management, saying it plans to use the cash to "go on offense" with opportunistic acquisitions. While Mudrick subsequently jettisoned its stake, retail traders are still buying the struggling movie chain story and making loads of cash in the interim.

Will the narrative play out elsewhere? AMC's Aron additionally revealed that retail investors "own more than 80%" of the company at the last count, meaning a non-institutional base now owns a super-majority of AMC shares. "We work for them. I work for them... and their ambitions and passions are important to me," he added on a recent earnings call. Besides taking out the shorts, other CEOs may look to create a relationship with this mighty group of shareholders, with other meme plays skyrocketing in the last few sessions. In premarket trade: BlackBerry (NYSE:BB) +30%; Koss Corporation (NASDAQ:KOSS) +10%; GameStop (NYSE:GME) +2%.

Things are remaining quiet for the broader market as the meme trade picks up steam, with sentiment shifting to a small group of names led by AMC Entertainment (AMC). Major averages closed marginally higher on Wednesday and U.S. stock futures inched lower overnight, falling 0.3% in another languid session. Meanwhile, the short squeeze at AMC is really picking up pace, with volumes soaring to unprecedented levels.

Inflicting pain: Short-sellers betting against AMC have lost $2.8B in recent sessions, according to S3 Partners. That means YTD losses of more than $5B. As shares keep rallying, short sellers are forced to buy back the stock to cut their losses, sending prices even higher.

For those still interested about economic news, worker filings for unemployment benefits likely fell again last week. Economists anticipate weekly jobless claims published by the Labor Department this morning to show a decline to 390,000, from 406,000 recorded in the prior week. That's the fewest claims since the coronavirus crisis began in March 2020 and the fifth consecutive week claims have reached a fresh pandemic low.

Quote: "We've heard a lot about workers being slow to rejoin the workforce and some reluctance to take the jobs that are available, but on the other side of that, the recovery is proceeding [and] layoffs are declining," said Nancy Vanden Houten, lead economist at Oxford Economics. "It's still a significant amount of progress from where we were... and in a short time too."

The Fed will soon begin offloading the corporate bonds and ETFs it bought last year during the onset of the coronavirus pandemic. The Secondary Market Corporate Credit Facility was created to bring down borrowing costs for companies reeling from the crisis and was one of a dozen emergency measures the Fed implemented to support the financial system. SMCCF held $5.2B of bonds from companies like Walmart (WMT), Visa (V) and Whirlpool (WHR) as of April 30, as well as $8.6B of corporate debt funds, such as the Vanguard Short-Term Corporate Bond ETF (VCSH).

Bigger picture: Usage of the SMCCF and a related vehicle, the Primary Market Corporate Credit Facility, quickly restored investor confidence in major corporations' ability to issue debt. As a result, the latter vehicle never made a purchase, and the SMCCF’s holdings peaked at around $14.2B last year, under 2% of the $750B available. That means the Fed's actual presence in the market was quite limited, and the facility had been shut to new purchases since the end of December, following a decision by former Treasury Secretary Steven Mnuchin.

"MCCF portfolio sales will be gradual and orderly, and will aim to minimize the potential for any adverse impact on market functioning by taking into account daily liquidity and trading conditions for exchange traded funds and corporate bonds," the Fed said in an accompanying statement. Sales should be completed by the end of this year and net proceeds will be remitted to the Treasury Department. The New York Fed, which manages the SMCCF, will provide additional details before the sales begin.

Outlook: Several Fed officials have already begun discussing trimming other emergency measures put in place during the pandemic, including the central bank's monthly purchase of $120B in government and mortgage debt. "We're talking about talking about tapering, and that is what you want out of us. You want to be long-viewed here," San Francisco Fed President Mary Daly said last week. Fed Vice Chair Richard Clarida has also suggested that the appropriate timing of scaling back should be discussed at upcoming policy meetings (the next one is slated for mid-June).

It's becoming harder to find goods and services that haven't increased in price in recent months, with the U.S. Consumer Price Index rising by another 4.2% Y/Y in April. Case in point: Kimberly-Clark (NYSE:KMB) began June by raising prices on consumer goods by 4% to 9%, Scotts Miracle-Gro (NYSE:SMG) will follow suit this summer, and Procter & Gamble (NYSE:PG) has said it will mark up prices in the fall. Price tags on appliances from Whirlpool (NYSE:WHR) and others have meanwhile risen by double-digit percentages from a year ago, while Costco (NASDAQ:COST) is raising labels by 20% or more for beef and up to 10% for clothing. Restaurant costs are rising too - Chipotle (NYSE:CMG) just upped delivery prices by 4% - while raw materials like lumber, steel and semiconductors are still near record highs.

What's happening? Many consumers are emerging from the pandemic with padded wallets, thanks to stimulus checks and savings that were accumulated during coronavirus lockdowns. In a simple sense, that's creating more demand for many items than industries can currently supply, and subsequently created a "reopening theme" that has drifted into the stock market. That's not all. A combination of rock-bottom interest rates and aggressive fiscal spending may be compounding the problem, against a backdrop of labor shortages, surging transportation costs and supply chain disruptions that have been seen across many areas of the economy.

While manufacturers have been hesitant to pass on rising costs to consumers - especially in the thick of the pandemic - others have been less hesitant to do so in recent months as COVID-19 cases decline nationwide. Another trend being seen in the retail sector is known as "shrinkflation," where companies slim down their product sizes but keep prices the same. "Consumers check the price every time they buy, but they don't check the net weight," said Edgar Dworsky, a consumer advocate and former assistant attorney general in Massachusetts.

How long will it last? "Policymakers at the Fed and in the [White House] need to recognize that the risk of a Vietnam inflation scenario is now greater than the deflation risks on which they were originally focused," declared former Treasury Secretary Lawrence Summers, who served under the Clinton administration. "Whatever was the case a few months ago, it should now be clear that overheating - not excess slack - is the dominant economic risk facing the U.S. over the next year or two." Current administration economists feel different, anticipating near-term bursts of inflation that will recede as the economy returns to normal. President Biden is also not holding back on additional stimulus, unveiling a $6T budget for FY2022 last Friday that would translate into annual deficits of over $1.3T (and $1.8T in 2022).

A link between Pfizer (NYSE:PFE) vaccine and myocarditis cases?

Tesla (NASDAQ:TSLA) recalls hundreds of Model 3 cars that were shipped to China.